Football
News
Pep Guardiola's side were in this position in the 2017/18 season but things feel different this time
Simon Lillicrap
22:12, 24 Feb 2021

Manchester City made it 19 wins in a row in all competitions with a comfortable 2-0 win over Borussia Monchengladbach as goals from Bernardo Silva and Gabriel Jesus saw them put one foot in the last eight of the Champions League. Not only did they win with ease, yet again, but Pep Guardiola’s side asserted themselves as favourites to win the tournament, the only trophy that has evaded them to date.

We know, we have been here before with Guardiola’s side.

In 17/18, the season they broke every single Premier League record to end with 100 points, they were whispers of the ‘Q word’ in early February, with the league in the bag, a League Cup final to come and with the team flying in Europe. It turned out to be Paul Cook’s Wigan Athletic who pulled off one of the great FA Cup upsets to halt that dream, while Liverpool knocked them out of the Champions League at the quarter-final stage.

But something feels different this time around. This team has evolved, Ruben Dias and John Stones now make up a solid central pairing, with Aymeric Laporte a sensational understudy. The real star of the show this season has been Joao Cancelo, a player who was repeatedly belittled last season, has come to the fore and now, in this full-back/central-midfield hybrid position Guardiola likes to get him in from the left or right, is in the form of his life. His ball for Bernardo Silva’s opener was almost unbelievable, while the same combination found Jesus in the six-yard box to tap in the second. 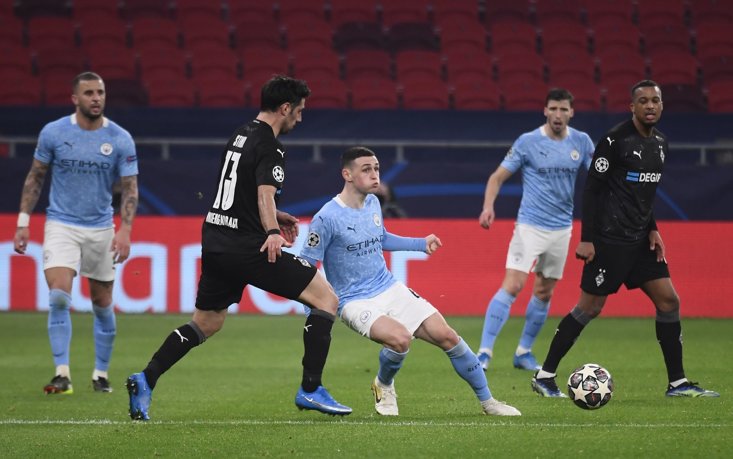 But this is Guardiola’s Man City at their best. The play is fluid once again, mesmerising, majestic, mystical. Sergio Aguero returned as a substitute, but they’ve played the majority of the season without their main man and even with Kevin De Bruyne’s latest injury, other players such as Ilkay Gundogana and Phil Foden have stepped up to the plate. They are simply a joy to behold at the moment.

To win all four trophies would be ridiculous, and tonight’s win will only increase talk of an unprecedented season. You can see how it may pan out, the Premier League title is already in the bag as they sit ten points clear of nearest rivals Manchester United. The League Cup final against Tottenham is to come in April, while a tough trip to Everton in the FA Cup is what stands between them and the final four. After tonight’s performance, barring a disaster, they are in the last eight of the Champions League but this is where they’ve fallen short before, even when heavily fancied.

"If the people say that [we are favourites] we have to accept it but [we are] the team who has only arrived once in the Champions League semi-final in ten years," Guardiola said after the game. "If they say we can win it, no problem."

Although the European Cup is the one trophy they will be desperate to win more than all the others, and Guardiola himself will look to finally prove he can win it without the other worldly talents of Lionel Messi, it isn’t the be all and end all of this team. Football is an art form and at the moment, Guardiola is Michelangelo and his team are painting the Sistine Chapel ceiling.

Look up. Take it in. Smile.

This City team has proved that they are special over the past few months. 19 consecutive victories and utter domination in every single game they play. Superiority is one thing but consistent superiority no matter the opponent is something we rarely get to witness. Trophies will follow, that is for sure, but for now, let’s just take in every pass, every dribble and every beautifully crafted goal that this team scores.