Football
News
Forget These Former Arsenal, Liverpool And Manchester United Legends - This Manchester City Star Is On Course To Be The Greatest Premier League Striker Ever
Chris Knight
15:30, 30 Mar 2019

Death, taxes and Theresa May putting her Brexit withdrawal agreement forward for another vote. There are few certainties in life that provide much in the way of joy, but thankfully Sergio Aguero and his habit of banging in Premier League goals does provide some light relief from the everyday despair of Great Britain.

The Manchester City forward was at it again on Saturday lunchtime as his goal helped the Citizens return to the summit of the Premier League table with a 2-0 win at Fulham and it also provided a personal milestone for the Argentine.

Aguero was notching the 162nd Premier League goal of his career as he moved to seventh place on the all-time list of scorers in the division, moving alongside Jermain Defoe, who needed 256 more games than Aguero to reach that tally.

Aguero has scored his 162 goals in just 231 appearances - scoring every 1.42 games on average - and it is a strike-rate that only Thierry Henry can come close to matching. Alan Shearer, Wayne Rooney, Andy Cole, Frank Lampard, Henry and Robbie Fowler have scored more Premier League goals than Aguero and none have managed them at a better ratio than the City man. 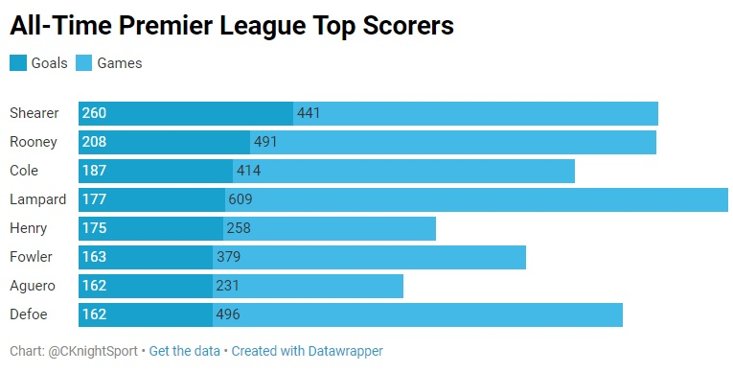 Henry, the Arsenal legend, is fifth on the all-time list with 175 goals in 258 appearances - scoring every 1.47 matches on average - and he banged in 20 goals for five successive seasons before an injury-marred final campaign with the Gunners saw him manage just 10 in 17, with Henry then moving on to Barcelona (and then returning to The Emirates for a brief cameo during the latter stages of his career).

Few would bet against Aguero overhauling Henry and a few others in the all-time list as the 30-year-old is on course to score 20 goals for a fifth Premier League campaign running, with the Manchester City man currently boasting 19 goals from his 25 appearances in the competition this season.

In fact, Aguero might fancy his chances of leapfrogging Henry before the season is out. Aguero might be 13 goals adrift of Henry with only seven games remaining but Aguero has a quite ridiculous record against City's remaining opponents.

Much will depend on whether Aguero is fit after being withdrawn from the Fulham game early with an injury and City fans will be sweating on the fitness of their star striker as the title race with Liverpool moves towards the business end of proceedings. If fit, it bodes well that Aguero has scored two goals in three games against City's next opponents, Cardiff, and City then play Tottenham, against whom Aguero has banged in 10 goals in 13 league appearances.

City are on course to defend their title and Aguero is well on his way to cementing his place as one of - if not THE - all-time great forwards of the Premier League era.