Football
News
Brown, a parent of three daughters, is concerned about the perils of social media
Neil Goulding
08:05, 23 May 2022

Wes Brown is desperate to educate youngsters on the perils of online abuse.

The former Manchester United and England ace has three daughters – and like any parent – worries about his kids being attacked on social media.

Role model Cristiano Ronaldo showed the pressure of the social media bubble when he uncharacteristically smashed the mobile phone of out of the hand of a 14-year-old boy after United’s dismal defeat to Everton earlier this season.

And parent Brown is adamant more people – especially kids – need to be educated on the damaging and, sometimes fatal affects social media abuse can have in today’s society. Many people have suffered mental problems, self-harmed and even tragically killed themselves because of online abuse.

“What Ronaldo did was caught on camera went viral on social media,” said Brown.

“What he did was different to online abuse, but ultimately social media can effect lives, especially those of children.

“You have to be able to talk about it and ask questions about it.

“People are becoming more aware of online hate, it’s not just with adults, a lot of it is now with children as well.

“With the social media networks that everybody has access to now, I think you have to make kids aware of the dangers and situations out there.

“They might not be doing anything on purpose, but they need to know how much it can harm someone. And when something is not just ‘banter’.”

The initiative, which is run in conjunction with the Home Nations FA and Cybersmile – a non-profit organisation who teach the importance of being kind online – is close to Brown’s heart.

“We’ve got to make people aware of the damage online abuse can cause,” he stressed.

“I think some people just think it’s banter, messing about, but ultimately the person who it’s against can take real harm from it.

“Some of those people can keep it really quiet, bottle it up and end up doing some very nasty things.

“It’s horrible. My eldest daughter is 19, so she has everything [mobile phones and access to social media], and I’ve also got a 15-year-old and an 11-year-old. And now the 11-year-old wants to on everything like her 19-year-old sister.

“Letting your kids on social media at a young age opens up a lot of windows and doors – and you don’t necessarily see their phone every day.

“But ultimately you need to talk to about it. There are certain things you can do to make things private, like just friends and family.

“However as you get older that will probably change, so you have to make them aware that they’ll come across people they don’t even know who could say some really nasty things.”

Brown grew up in a generation when mobile phones and social media were just starting to become prevalent.

And as a footballer he found a thick skin for criticism from a young age. But in a changing world Brown knows there has to be change.

“We were lucky when we were younger because mobile phones had only just come out,” added Brown.

“There was no social media and, ultimately, when that started to come out I was bit older and you learnt to ignore stupid things because you’d heard them all on the football pitch for many years.

“But that’s not the case for everyone, it didn’t faze me, but it’s different for younger people – especially now with how young some of the kids are when they get on social media.

“There are times when things get said and, although someone might think it’s just banter, it might really affect someone because they don’t know how to handle it.

“We do want the really nasty people to be punished because it can get really serious. It could prove fatal, which is obviously awful.

“You have to be able to talk about it and ask questions about it.” 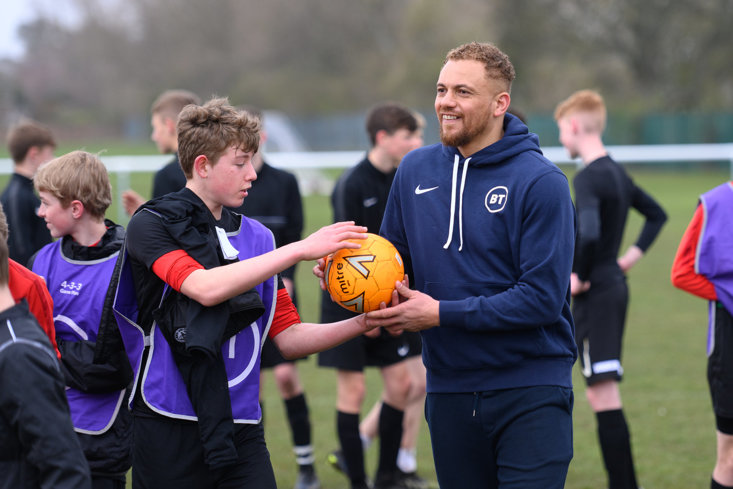