Kylian Mbappe is the absolute boss, as the French Football Federation are finding out to their great cost right now. So important is the Paris Saint-Germain striker in the make-up of the sport in l’Hexagone that whatever Mbappe says goes.

This week the FFF have announced that they will review image rights arrangements after Mbappe refused to take part in a squad photoshoot ahead of Thursday’s Uefa Nations League A group 1 clash with Austria. He doesn’t want to be associated with betting brands or fast-food companies, leaving the federation with a headache when it comes to promoting existing partners.

That isn’t the only issue being stirred within the France squad right now, with Paul Pogba allegedly having been blackmailed by his brother, Mathias, over claims the Juventus midfielder had asked a witch doctor to cast a spell on Mbappe. Mathias asked for around €13 million to stay quiet, with Paul reportedly having coughed up €100,000 to try to bring an end to the saga.

If it feels like this is familiar ground for a France squad to be treading around the time of a major tournament, you’re far from mistaken. Back in 2010 Les Bleus were humiliatingly dumped out of the World Cup just two games in, finishing bottom of Group A with a single point after defeats to Mexico and hosts South Africa.

But the embarrassment ran deeper. Having drawn 0-0 in their opening fixture against Uruguay, they were then deadlocked with Mexico at half-time in Polokwane when coach Raymond Domenech was told to “go f**k yourself” by striker Nicolas Anelka as he was attempting to cajole his players into an improved second-half performance. Anelka was immediately substituted and expelled from the remainder of the tournament. 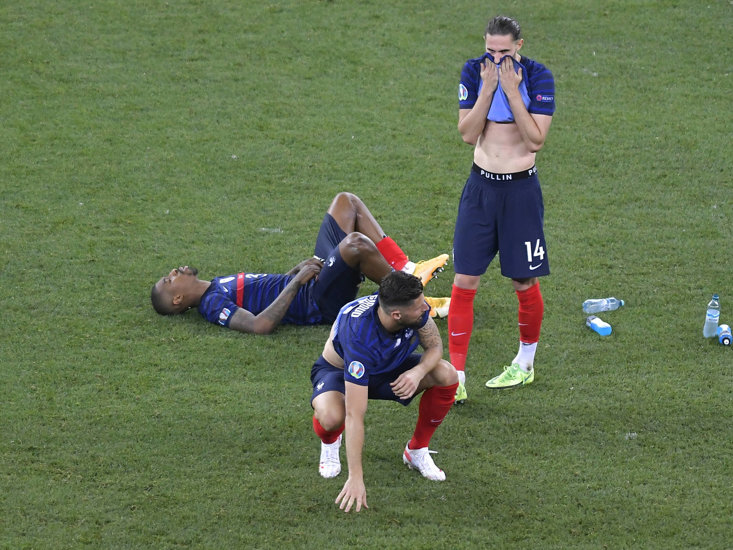 FRANCE'S ELIMINATION IN 2021 LED TO RECRIMINATIONS AMONG THEIR FAMILIES

In the days afterwards, the situation only got worse. The squad were meant to be training ahead of their final group game against South Africa when captain Patrice Evra ended up having a row with fitness coach Robert Duverne after relaying the message that the players would not be taking the field. The entire playing group retreated to the team bus and drew the curtains, refusing to return to the practice session.

The team director Jean-Louis Valentin resigned, blasting “It’s a scandal for the French, They don't want to train. It’s unacceptable. As for me, it’s over. I’m leaving the federation. I’m sickened and disgusted.” Meanwhile, Domenech was left to read a statement to the media on behalf of the players, explaining: “All the players without exception want to declare their opposition to the decision taken by the FFF to exclude Nicolas Anelka from the squad. At the request of the squad, the player in question attempted to have dialogue but his approach was ignored. The FFF has at no time tried to protect the squad.”

And as recently as last year, Les Bleus’ exit from Euro 2020 came against the backdrop of incredible scenes in the stands involving members of the players’ families. Adrien Rabiot’s mother, Veronique, allegedly blasted Paul Pogba’s role in a late equaliser for Switzerland in their round of 16 clash in earshot of the midfielder’s family. Then, after France had lost on penalties, she angrily confronted Mbappe’s parents, telling them to do something about his arrogance. She later complained about Mbappe’s attitude to journalists congregated in the post-match mixed zone.

So while the latest developments involving Mbappe and Pogba are concerning for French fans, they will also be seen as just the latest escapades amongst a national team which has seen it all over recent years. While this is a group which contributed many of the players who won the World Cup for their country in 2018, they have also come to be familiar with infighting and scandal. And that's before we even get to Karim Benzema's blackmail-led hiatus from international duty.

Whatever steps the FFF make to appease Mbappe this time around in relation to image rights, the next issue to befall Les Bleus never feels likely to be too far away.