Football
News
So far at Euro 2020, the pre-tournament favourites are yet to produce their most beautiful music
Hector Nunns
20:06, 24 Jun 2021

While Paul Pogba was being hailed in France as the ‘conductor of the orchestra’ after a gripping conclusion to the ‘Group of Death’ on Wednesday night, the pre-tournament favourites are yet to produce their most beautiful music.

At a first glance there are grounds for satisfaction, with the world champions having finished unbeaten and top of a very tough pool also including Germany and Portugal, and one in which even the less-fancied Hungary made full use of some home advantage and proved a real handful.

Les Bleus, with Pogba again as at the World Cup in 2018 producing displays of a consistently high level that will have Manchester United fans tearing their hair out, easily beat Germany without really getting out of second gear. All looked primed for a straightforward qualification.

But that was followed by two Group F draws in which a stingy defence has been sorely tested, and the illustrious attacking force has yet to truly catch fire. They may still have too much for Switzerland in the last 16, but placed in the harder half of the draw more and tougher tests should lie ahead.

On the plus side for France, there has been confirmation of both the deep array of talent at Deschamps’ disposal, and the tactical flexibility with which the coach operates. 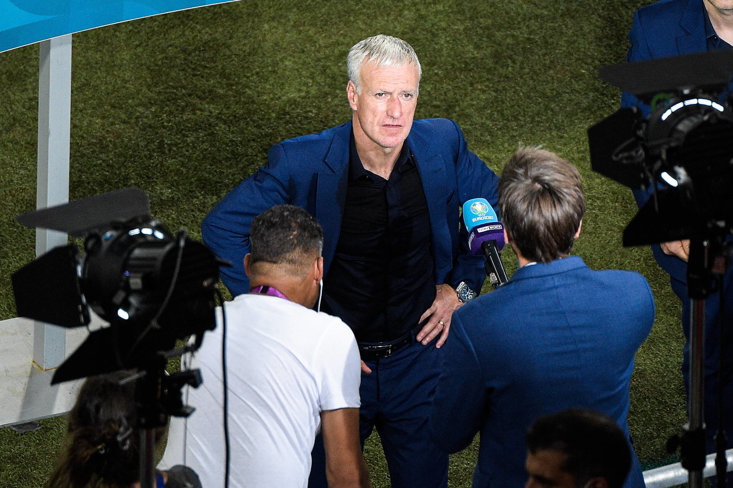 We have already seen France switching between the 4-2-3-1 formation that served them so well in Russia, to a 4-4-2 diamond set-up with Antoine Griezmann behind Karim Benzema and Kylian Mbappe, and a 4-3-3 with Griezmann pushed wider and Adrien Rabiot joining Pogba and N’Golo Kante in midfield.

Benzema, following his five-year exile, vindicated Deschamps’ move to reintegrate him by getting his first two goals for France in the 2-2 draw with Portugal since a double in a friendly against Armenia in October 2015. For symmetry, his friend and former Real Madrid team-mate Ronaldo weighed in with the other two on the night.

However, there are areas that will be giving Deschamps pause for thought. Firstly, the injury count is slowly mounting, with the area of left-back – in which France looked so blessed – suddenly looking vulnerable.

Lucas Hernandez was taken off at half-time against Portugal with a slight recurrence of a knee issue, and his equally able replacement – Everton full-back Lucas Digne – lasted only seven minutes before suffering what looked like a serious thigh muscle strain. He looks a major doubt at least for the Switzerland game, and quite possibly for the rest of the tournament.

The team have already lost Ousmane Dembele, who would certainly have played a significant role in attack in the campaign even if from the bench  - and France will not want to see any more key players leave the field against the Swiss.

Deschamps will just need to keep an eye on team morale. Olivier Giroud, such a key player in recent years, has been marginalised by the return of Benzema – a move that always had the potential to ruffle feathers - and there have been one or two rumblings emerging from the camp.

And Mbappe needs a goal. The explosive and jet-heeled 22-year-old PSG forward certainly hasn’t had a poor tournament to date. He had an effort disallowed against the Germans, and his pace to burn was there for all to see. Max Hummels must still be recovering.

He set up Griezmann for the equaliser against Hungary, and won the soft penalty against Portugal. But one of the main talismans of the 2018 World Cup is not yet firing on all cylinders. Goals are his lifeblood, and the first cannot come soon enough.

Once the dam breaks, more may follow, and some of the pressure to provide the goals is off him with Benzema’s reintroduction to the fold.

Deschamps, with the calm resolve of a World Cup-winning manager and a coach that also took his team to the final of this tournament five years ago, was in typically pragmatic form after finishing the group games, identifying what had gone well and not so well, and the task ahead.

He said, “I am happy with the performances. It has been a complicated group with difficult matches – you have seen how well Hungary played against Germany and us as well.

“At the end in terms of points we finished first. Maybe other teams at the tournament gave a better impression than France to this point. But now it is a new competition that starts now in the knockout phase.

“We didn’t do everything well all the time, and there are things we can improve. It wasn’t perfect. But I am satisfied and looking forward to our next match on Monday.

“The formation against Portugal was very much with the opponent in mind, I picked the players I thought would be best for the game.

“And so that won’t necessarily be the formation or the system for other matches against different opponents. It could be the same, but I’m not stuck with it and can change.

“Lucas Digne – that is a worry. He has a thigh muscle problem and it is going to be difficult for him. We will see over the next days, but with a muscle injury like that normally it’s not a good sign.

“Lucas Hernandez had a little problem with his knee which reacted, so I didn’t want to take any risks and he had been booked against Portugal.”