Football
News
With one win in five and 13 games remaining, the Toffees have some serious work to do to ensure their survival
Conor Keane
16:55, 08 Mar 2022

Everton fans are worried. Their heavy defeat against Tottenham Hotspur on Monday has made relegation a real possibility and if something doesn’t change soon, the Toffees could exit the Premier League for the first time.

Last night would have been an eye opener for manager Frank Lampard, who now sees the gravity of the task at hand in keeping this historic club in the top-flight. Defensively, they were all over the place and tried to play a high line against Antonio Conte’s side which only exploited them even more.

Goalkeeper Jordan Pickford had an off night, but he was left stranded by some of the poor defending by his back line. In the early minutes it seemed like there was an interesting contest between the two teams and then the quick two goals for Spurs changed the game completely. It was as if the Everton players gave up and that allowed Spurs to cut through them with ease.

Their defence has been their achilles heel for years and yet nothing has ever really been done to heal it. The club has prioritised bringing in attacking resources in recent years and it is no surprise that the club is where it is with its frailties at the back.

I mentioned they're a Championship back four at half-time. That might be a little bit harsh on some of the back fours in the Championship.

With one win in five and 13 games remaining, including games in hand which will only congest their remaining schedule, the boss will have to figure out a solution to make his back line much more difficult to penetrate. It looks like the only way for Everton to avoid being dragged further into the relegation battle. 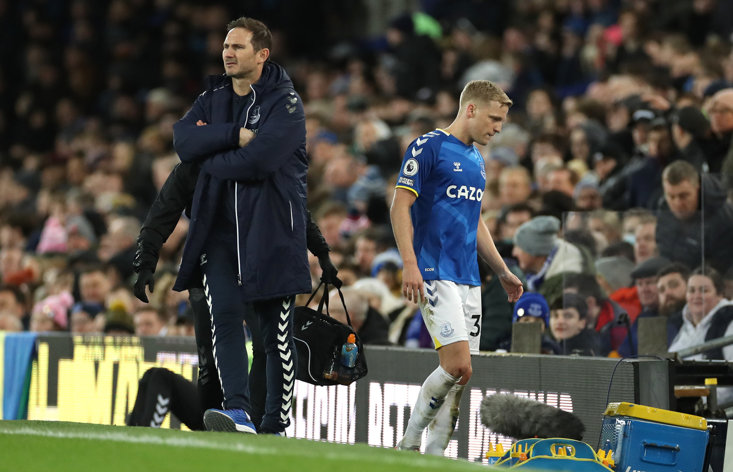 The club’s best central defender, Yerry Mina, is currently out of action until at least April with a quad injury and Lampard has had to cope with Michael Keane and Mason Holgate as a pairing which evidently hasn’t worked. While Mina isn’t exactly a world-beater himself, he offers a lot more organisation at the heart of defence than any of the other centre-backs in the squad, so his return cannot come soon enough.

An understudy that Lampard could call upon is Ben Godfrey, who has played at both centre-half and right-back. The defender has been waiting in the wings to be given a chance to impress his manager and help tighten up the defence which is leaking goals continuously.

Godfrey, when he has featured this term, has predominantly been deployed on the right but he was brought in to play centrally from Norwich City. With the current failings of the two defenders currently ahead of him, Lampard may turn to Godfrey to play alongside one of the struggling defenders in the hope that he can have a positive impact and bring harmony to Everton’s most chaotic area of the pitch.

As is the cliche in football, their destiny is in their own hands and they have games in hand on the sides beneath and above them, but it’s not the fixtures they have left to play that matter, it’s the points they take from them.

The Toffees currently find themselves in a sticky situation with their final run-in of games which include the Merseyside Derby, Chelsea, Manchester United and Arsenal. This is where those games in hand could come back to haunt them as some of their four postponed fixtures could be squashed into this period which will make their survival mission even harder.

Everton have a gargantuan eight weeks ahead of them and Lampard will have the weight of the club on his shoulders as he looks to guide them through the coming storm safely.

Everton are 10/3 to get relegated with Betfred*