Us Sports
News
The LA Lakers had their worst season in over five years and Vogel has been shown the door
Steven Allen
19:00, 12 Apr 2022

Head Coach Frank Vogel has paid the price for the Los Angeles Lakers’ poor campaign, as they failed to reach the play-offs and posted their worst record since the 2016/17 campaign - the season after Kobe Bryant retired.

The former Pacers & Magic head coach has been sacked after three years in role having led them immediately to an NBA Championship in his first season in charge during the lockdown bubble playoffs, before falling short in his second season due to recurring injuries to his two star men, LeBron James and Anthony Davis. They lost to the eventual Western Conference champions in the Phoenix Suns last year, and the tale of this season has continued in a similar fashion.

Signing Russell Westbrook seemed like the final piece of the puzzle to the grand tapestry of a Championship winning team. The all-star point guard has impressed ever since his arrival in the NBA 2008, and after some movement around Houston and Washington, he arrived in LA with the record for most career-triple-doubles. The Lakers had finally removed some less performing players for a world class player that should have allowed LeBron to stay in the forward position and Davis to stay as a high-scoring center.

On paper, the Lakers were going to meet the Brooklyn Nets in this year’s finals because they started the season with all-star teams compared to every other team in the league, and they’d all live happily ever after. Unfortunately, basketball isn’t played on paper.

A record of 33 wins and 49 losses is simply unacceptable from a team with so many stars. An over-reliance on ageing stars has led them down a corridor of uncertainty regarding the aims of the team. Quite like many other large sporting entities around the world, they’ve gambled on superstars of the past rather than the superstars of the future. Picking up Russell Westbrook was a great move, if they hadn’t traded Kentavious Caldwell-Pope, Kyle Kuzma, Montrezl Harrell, Aaron Holiday, Spencer Dinwiddie and Isiah Todd the other way. Of course Westbrook is a more talented player, but great teams win rings, not individuals. 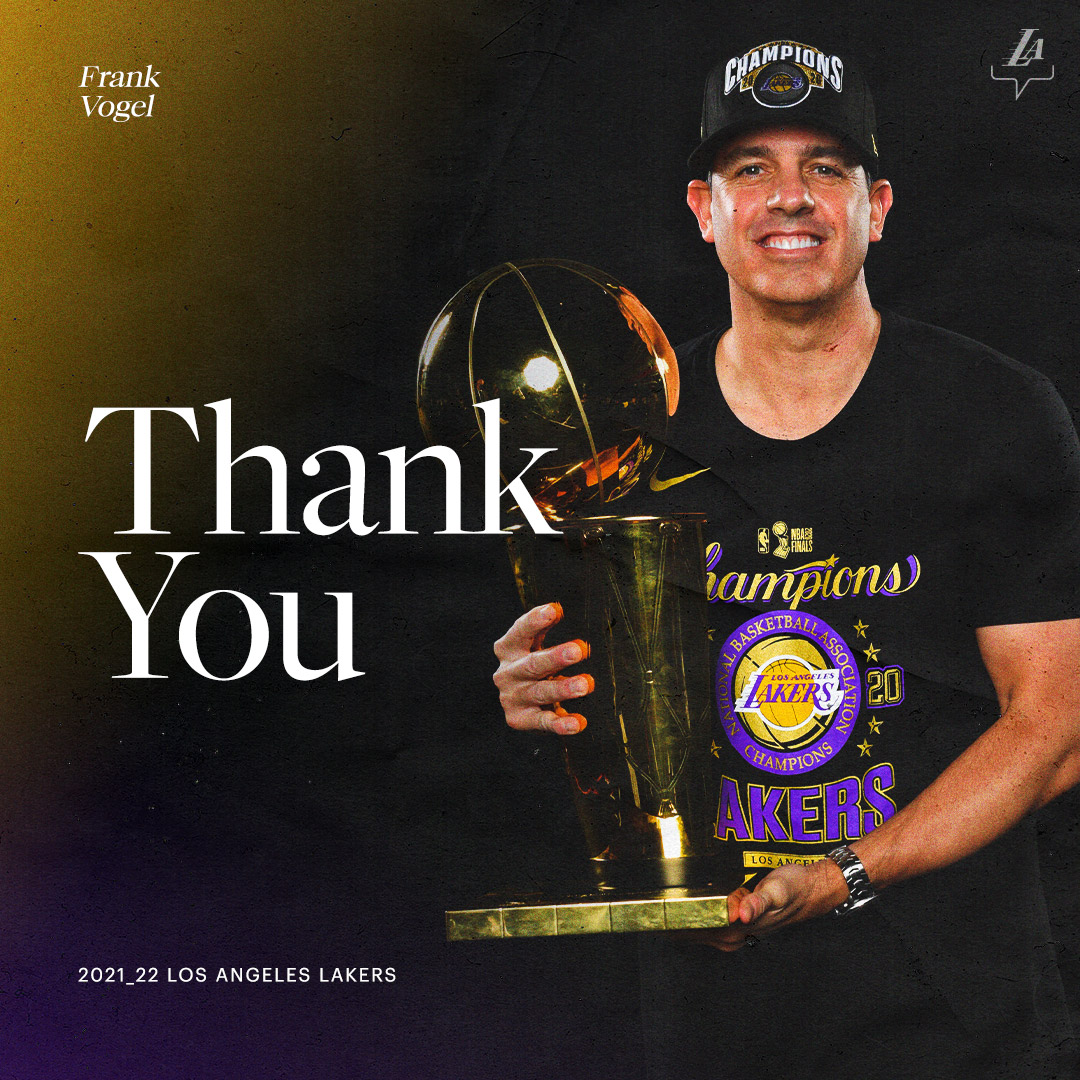 And for the failings of this team of individuals, who struggle to stay fit for the 82-game regular season, it’s hard to look past the head coach and front office who put the team together if there’s a finger to point.

The important part is what comes next for the Purple and Gold. A new head coach is needed as soon as possible, and Russell Westbrook’s player option, where he can extend his contract if he chooses to this summer, will need to be dealt with, whether he stays or goes. On top of the list of potential candidates for head coach is Toronto’s Nick Nurse.

Nurse’s playing career leaves a bit to be desired, having played in college for four years as well as becoming a player-coach for the Derby Rams in the British Basketball League, as well as floating between clubs on both sides of the Atlantic, including Birmingham Bullets, Manchester Giants and London Towers. He got his big break in the D-League (now known as the G League), where he managed to win two championships and get 23 players called up to the NBA, working with the likes of Patrick Beverley and Marcus Morris.

The Canadian National Team head coach has worked tirelessly at Toronto Raptors since 2013, working to implement offensive plans that emphasises a passing game and shooting from the three-point line. Their stunning playoff run in 2018 led to them becoming the first winners of the NBA Championship from outside of the US, with Kawhi Leonard winning the MVP award before moving on to the Clippers.

Nurse signed a multi-year contract extension back in 2020, and it’s believed that he has two years left on that deal so it is unclear whether the Lakers would be able to pay his way out of the contract, or even if he would want to take the difficult job. Regardless, Nurse has the coaching talent to create a winning team for the next season. Time is ticking on the players and the management to make this right, otherwise another era will be lost and the Lakers will find themselves in another ‘rebuild’ process that might not end as soon as they hope.

x
Suggested Searches:
The Sportsman
Manchester United
Liverpool
Manchester City
Premier League
More
us-sports
Colin Kaepernick, The NFL Star Rather Than Activist, Might Be...
Google Colin Kaepernick. There he is, the ‘American activist’. Check out Wikipedia. Oh yes, [ ... ]
us-sports
On This Day 20 Years Ago, The British Bulldog Davey Boy Smith...
On 18th May 2002, ‘British Bulldog’ Davey Boy Smith passed away from a heart attack at the [ ... ]
us-sports
NBA Playoffs Resume After Chaotic Exits For Champion Bucks And...
It’s been a tremendous few days in the NBA and this week’s conference finals, which start [ ... ]
us-sports
Ric Flair Returns At 73: The Nature Boy Will Walk That Aisle...
“To be the man, you gotta beat the man!” ‘Nature Boy’ Ric Flair has uttered [ ... ]
us-sports
There Are Storylines Everywhere You Look In The NFL's Week 1...
Something the NFL seem to be willing to do is make their sport a spectacle through their own power. [ ... ]
us-sports
Chuck Daly: 'Daddy Rich' Tamed Rodman, Bagged Isiah His Rings...
Entering a debate on the greatest sports sides in history should inevitably reach a particular conclusion. Avoiding [ ... ]
us-sports
'We Want RK-Bro! We Want The Usos!': No One Is Safe From Sasha...
When WWE Women’s Tag Team champions Sasha Banks and Naomi first joined WWE, the landscape was [ ... ]
us-sports
Everything You Need To Know About WWE WrestleMania Backlash
The wait ends this weekend, as WWE returns with their first Premium Live Event since WrestleMania. This [ ... ]
us-sports
The Crazy Times Of Kareem Abdul-Jabbar, The NBA All-Star Who...
This article first appeared in The Sportsman on 05/05/20 Being the number one draft pick in the NBA [ ... ]
us-sports
Blood Brothers: Randy Orton And Riddle Talk Chemistry, Growing...
The old adage dictates that opposites attract, and on the face of it that certainly seems true of RK-Bro. [ ... ]
us-sports
The NFL’s Best Trades and Free Agency Signings So Far
It’s the same every year. Almost as soon as the Vince Lombardi Trophy is awarded, attention turns [ ... ]
us-sports
Impact Wrestling's D'Lo Brown: We Didn't Open The Forbidden...
It is such an overused phrase that it has become cliched, but Impact Wrestling’s D’Lo Brown [ ... ]
us-sports
How ‘The Last Dance’ Brought Michael Jordan's Chicago Bulls...
It's now been 26 years since the Chicago Bulls ended the NBA season with a record of 72 wins and [ ... ]
us-sports
On This Day In 2018: WWE Icon Bruno Sammartino Passes Away
There have been 30 WWE Championship reigns in the last 2,803 days. In the 2,803 days between 17th May [ ... ]
us-sports
Why Jackie Robinson Day Means As Much Today As It Ever Has
Across Major League Baseball on Friday, number 42 will pitch to number 42. Number 42 will field the [ ... ]
us-sports
British Invasion: WWE Announces Its First UK Stadium Show In...
WWE will host their first UK stadium show in 30 years this summer, with the American sports entertainment [ ... ]
us-sports
Giannis, Embiid Or Jokic: The Wide Open Race To NBA Most Valuable...
The race to become the NBA’s regular season MVP has never been tighter. Giannis Antetoukoumpo [ ... ]
us-sports
One Champ To Rule Them All: Lesnar Takes On Reigns On WrestleMania...
We are halfway through WrestleMania weekend, and now that you’ve finally processed what happened [ ... ]
us-sports
WWE’s Combat Sport Crossovers Have Given Us WrestleMania Moments...
This weekend, two former UFC Champions will headline WWE’s most marquee of events, WrestleMania. [ ... ]
us-sports
Return of the Rattlesnake: Stone Cold Leads WrestleMania Saturday
WrestleMania 38 is almost here, as WWE prepares to stage its biggest shows of the year. Nowadays, the [ ... ]
us-sports
The Show of Shows: The Best Match From Every Single WrestleMania
WrestleMania weekend is upon us, as WWE prepares to stage the 38th edition of the biggest event in professional [ ... ]
us-sports
The Lion and The Hyena: 25 Years On From The Most Important...
“These people are standing, can you imagine the pain that is racing through Austin’s body? [ ... ]
us-sports
Stone Cold Steve Austin Accepts Kevin Owens' WWE WrestleMania...
“Whether you want to call this ‘The KO Show’, a match, a fight, a brawl. Whatever. [ ... ]
us-sports
30 Years Since LA Lakers Retired Magic Johnson's 32, His True...
During this week, back in 1992, the LA Lakers chose to retire the number 32 jersey worn by the [ ... ]
us-sports
Michael Jordan At 59: The Man Who Changed What It Meant To Be...
In the summer of 1998, Michael Jordan won his final NBA Championship with the Bulls. Six months later, [ ... ]
us-sports
Everything You Need To Know About WWE Elimination Chamber
WWE returns to Saudi Arabia this Saturday for Elimination Chamber. After a relationship between WWE [ ... ]
us-sports
Any Given Dre Day: Hip Hop Royalty Rules The Super Bowl
The Los Angeles Rams are your Super Bowl Champions, beating the Cincinnati Bengals 23-20 to lift football’s [ ... ]
us-sports
NFL Super Bowl: Los Angeles Rams Battle To Heroic Super Bowl...
A rousing speech from the Rock set the atmosphere for what was about to unfold. This game had it all [ ... ]
us-sports
NFL Super Bowl LVI Preview: Ask The Fans - Cincinnati Bengals...
You ought to have read our NFL Super Bowl previews on the Cincinnati Bengals and the Los Angeles Rams [ ... ]
us-sports
NFL Super Bowl Preview: Everything You Need To Know About The...
It has been some year for the Los Angeles Rams. They kickstarted their campaign with comfortable wins [ ... ]