Tyson Fury vs Dillian Whyte is finally set to go ahead after Frank Warren's Queensbury Promotions won the purse bids to stage a WBC world title fight between the two heavyweights.

At the purse bid, held in Mexico City, Warren's offer of £31m was enough to trump Matchroom's £24m. it gives Team Fury control over the bout which must happen by 29 April, with Cardiff's Principality Stadium reportedly the venue frontrunner. The two bids are the biggest in boxing history, breaking a previous record held by the Mirage to win rights to the Evander Holyfield vs Buster Douglas showdown in 1990.

"A venue and date for the fight will be announced in due course."

A fight between the Gypsy King and the Bodysnatcher has been in the works for some time now. The purse bids had been postponed three times before today, with Fury having negotiated with Anthony Joshua to step aside from his rematch Oleksandr Usyk. With those talks having fallen through, Fury turned his attention back to Whyte. 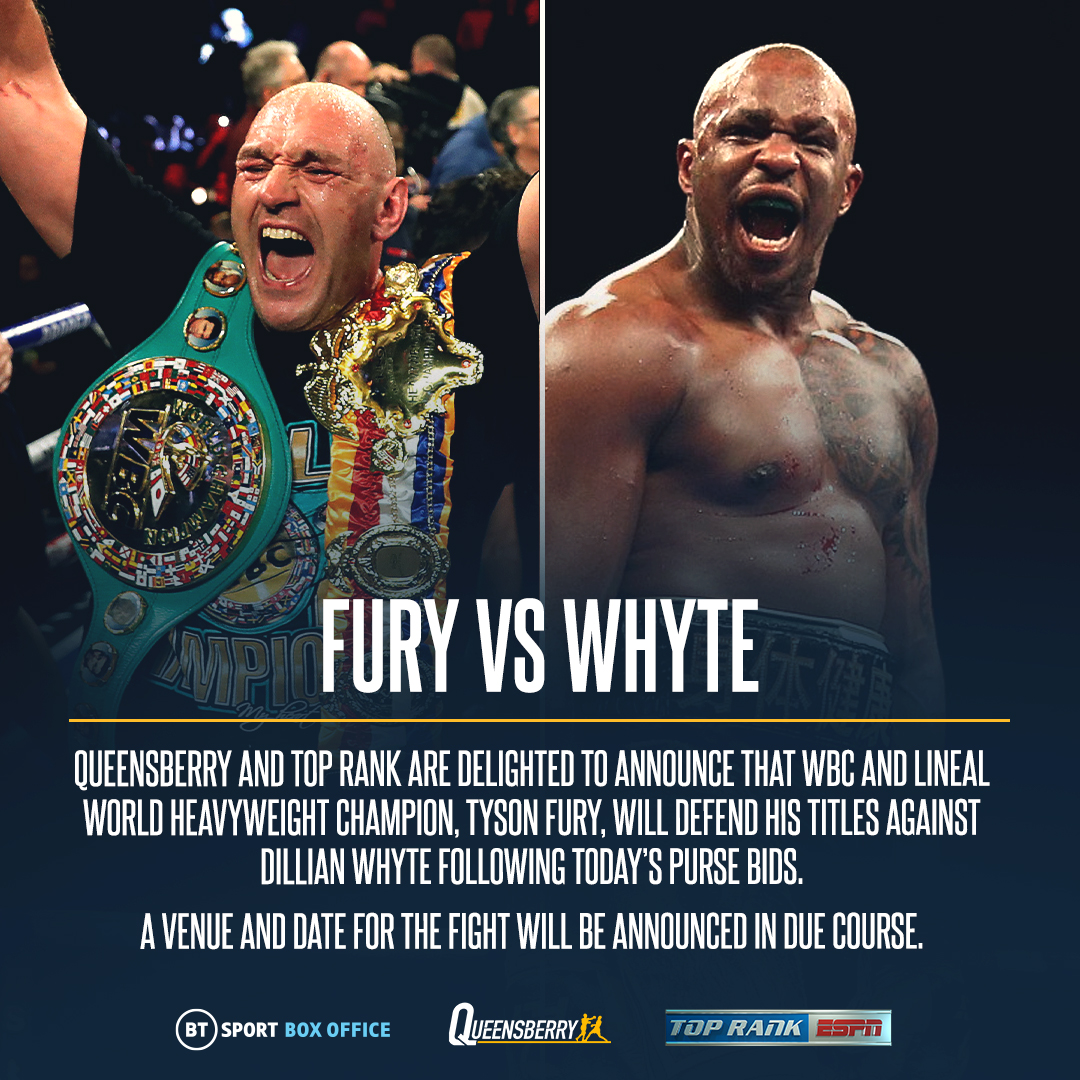 428
4897
x
Suggested Searches:
The Sportsman
Manchester United
Liverpool
Manchester City
Premier League
More
boxing
Outside The Ropes: Moorcroft and Dixon Reflect On Rollercoaster...
It is a week since the biggest fight of their lives and Rhiannon Dixon and James Moorcroft are itching [ ... ]
boxing
Out Of The Shadows: Gervonta Davis Can Shake The 'Next Mayweather'...
Gervonta Davis steps out of the shadows and into the spotlight this Saturday against Rolly Romero. While [ ... ]
boxing
The Italian Stallion Vs The Southside Slugger: When Balboa Stopped...
It’s been 40 years since the boxing masterpiece ‘Rocky III’ premiered in cinemas [ ... ]
boxing
Wilder Announces Ring Return: Five Boxing Stories You Might...
Deontay Wilder is returning to the ring, Canelo and GGG are set to go to war once again and some uni [ ... ]
boxing
More To Come: Women's Boxing Continues To Enjoy An Epic 2022
Back in December, The Sportsman predicted 2022 would be an incredible year for women’s boxing. [ ... ]
boxing
The Anthony Joshua Pressure Cooker Heats Up After University...
The cracks are starting to show for former unified heavyweight champion Anthony Joshua. The Olympic [ ... ]
boxing
Why A Third Fight With 'GGG' Has Arrived At The Perfect Time...
Saul ‘Canelo’ Alvarez and Gennady ‘GGG’ Golovkin will step into the ring for [ ... ]
boxing
Everything You Need To Know Ahead Of Gervonta Davis Vs Rolando...
Someone’s 0 has to go when WBA ‘regular’ lightweight champion Gervonta Davis and Rolando [ ... ]
boxing
Exhibition Mission: Floyd Mayweather Deserves This Victory Lap
Floyd Mayweather was having fun. On Saturday night in an Abu Dhabi ring, the boxer who defined a generation [ ... ]
boxing
Derek Chisora Returns: Five Boxing Stories You Might Have Missed...
Josh Taylor is eyeing an opponent that is not Jack Catterall, ‘Del Boy’ is set for a July [ ... ]
boxing
From Me To You And Then Bilbao: Rhiannon Dixon And James Moorcroft...
They are bickering like an old married couple even before the interview starts – Rhiannon Dixon's [ ... ]
boxing
One More Walk On The Wild Side: Deontay Wilder Might Not Be...
Former WBC heavyweight champion Deontay Wilder will be honoured with a life-size statue in his hometown [ ... ]
boxing
The Boy Who Would Be King: The Time Is Now For David Benavidez
Before his shock defeat at the gloved hands of Dmitry Bivol, there was one fight seemingly the whole [ ... ]
boxing
20 Years On: Remembering Micky Ward And Arturo Gatti's Exhilirating...
The word warrior is thrown around so readily in boxing, it has lost some of its impact. While every [ ... ]
boxing
The Fight Review: New Ali-Foreman Book Sees 'The Rumble' Through...
Some fights are just fights. Wiped away like the blood, sweat and tears that once stained the canvas [ ... ]
boxing
Undisputed No More: Do All Roads Lead To Jack Catterall For...
Josh Taylor has been stripped of the WBA super-lightweight championship. The Scot, who still holds the [ ... ]
boxing
Everything You Need To Know Ahead Of Joshua Buatsi Vs Craig...
We’re going to be treated to a south London derby in the capital this weekend when Joshua Buatsi [ ... ]
boxing
40 Years On From Larry Holmes Vs Gerry Cooney: ''Better In Our...
When a couple of heavyweight legends roll into town to reminisce about a classic fight from decades [ ... ]
boxing
Mike Tyson Charges Dropped: Five Boxing Story You Might Have...
‘Iron’ Mike Tyson can put his aeroplane nightmare behind him, there will be no President [ ... ]
boxing
Canelo Dethroned: Who Is Boxing's New Pound-For-Pound King?
Saul ‘Canelo’ Alvarez’s loss to Dmitry Bivol on Saturday ended not only his nine-year [ ... ]
boxing
Jermell Charlo And Brian Castano Battle To Become 7th Four-Belt...
This Saturday, Jermell Charlo and Brian Castano will fight to crown an undisputed light middleweight [ ... ]
boxing
Bouncing Back: Canelo Can Learn From Great Fighters Who Recovered...
Saul ‘Canelo’ Alvarez’s unanimous decision defeat to Dmitry Bivol last Saturday shocked [ ... ]
boxing
How To Watch The BOXXER Series Cruiserweight Tournament
The BOXXER Series returns this weekend with an eight-man cruiserweight installment. The spiritual successor [ ... ]
boxing
See No Bivol: Where Does Saul 'Canelo' Alvarez Go Next?
This is not the article you were supposed to be reading this Monday morning. Going into his fight with [ ... ]
boxing
Everything You Need To Know As Floyd Mayweather Takes On Former...
Floyd Mayweather returns to the ring this weekend when he takes on former sparring partner “Dangerous” [ ... ]
boxing
Straight Outta Sheffield: Kell Brook's Five Best Performances
Kell Brook is one of the standout British fighters of his era. The former IBF welterweight champion [ ... ]
boxing
Ranking Canelo’s Best Wins Ahead Of His Showdown With Dmitry...
From his professional debut in Mexico as a baby-faced 15-year-old to this weekend’s showdown with [ ... ]
boxing
Canelo Isn't Making History This Time, But Bivol Is A Top Drawer...
The impossible is just what Saul ‘Canelo’ Alvarez does at this point. A 20-0-1 professional [ ... ]
boxing
WBC Push Fury For Retirement Decision: Five Boxing Stories You...
Tyson Fury’s WBC championship future hangs in the balance, Otto Wallin is waiting to pick up the [ ... ]
boxing
Cinco De Mayo: The Storied History Of Boxing's Favourite Holiday
Cinco de Mayo commemorates Mexico’s victory over the French Empire at the Battle of Puebla in [ ... ]