Three years ago, Lille were a club in chaos that just avoided relegation to Ligue 2. Midway through this season, even with the team performing well, their seemingly unrelenting financial issues reached a breaking point. Majority shareholder Gerard Lopez was forced to sell the club having borrowed £200m from giant American lenders, who were unconvinced he would be able to repay the full amount.

There were good reasons for that theory. Lille have consistently been making a loss over the past few years, Covid-19 has decimated football’s finances all over the world and a TV deal worth £2.75bn collapsed. That plunged all French clubs into uncertainty, Lille were staring into the financial abyss and they still have serious financial problems.

This does not diminish Lille’s achievements this term, but adds to them. Their financial troubles, and a squad which cost just a quarter of the price of PSG’s, shocked the nation to become champions for the first time in a decade. What makes this success even sweeter is that they utilised several PSG outcasts in their title win.

As PSG spent huge amounts of money on star players, four gems escaped from their academy and ended up at Lille. Goalkeeper Mike Maignan, midfielder Boubakary Soumare, and forwards Jonathan Ikone and Timothy Weah all played important parts in wrestling the title away from one of the richest clubs in the world. It may not be a fairytale of Leicester proportions, but in financial terms it is absolutely cataclysmic.

Given their issues off the pitch, they’ve had to sell key players over the past few years, and despite their title success, may have to again this summer. Nicolas Pepe joined Arsenal for £72m, as did Gabriel as Lille scooped almost £100m from the north London club. When you are making that amount of money and your club is still in the financial mire, you know things are serious.

The first task of the new owners, a Luxembourg based investment fund, is to reduce the debt. Renato Sanches has found his feet at Lille and is still only 23, meaning the club could demand a sizable fee if he were to be moved on. Now they have won Ligue 1, Jonathan David and fellow striker Weah look like profitable gems at 21 while Isaac Lihadji and Tiago Djalo are also promising at 19 and 21 respectively. 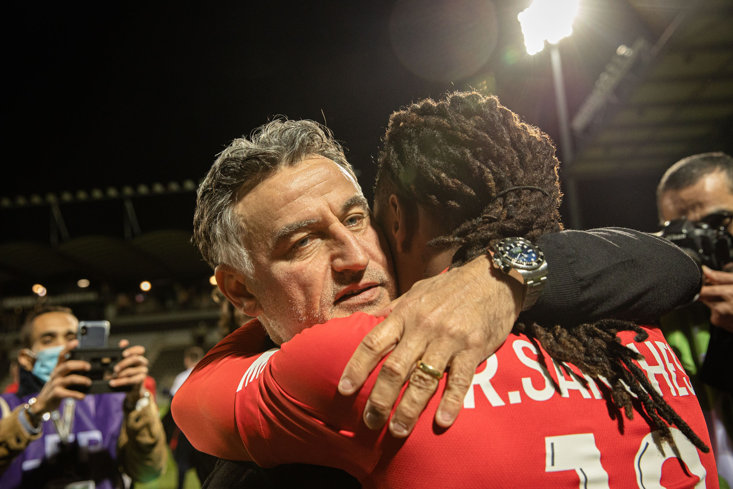 This squad has featured impressive youngsters guided by experienced heads. Former Southampton man Jose Fonte has been an imperious captain at the age of 37, while the impact of 35-year-old top goalscorer Burak Yilmaz has been seismic as the Turkish international hit 18 goals this term.

This blend has somehow produced the perfect storm, at the ideal moment. As PSG inexplicably sacked Thomas Tuchel, Lille rallied under Christophe Galtier. The man who came in to save them in 2017 has slowly rebuilt the club, despite the financial woes, and led them to back-to-back top four finishes in the past two seasons.

This one was just special for the 54-year-old, but it also looks like he will exit at the highest point of his career. Lille just cannot compete financially with their rivals and he now looks likely to join Nice, a club led by British billionaire Jim Ratcliffe.

Once he walks out the door, it would not be a surprise to see several of these now iconic players follow. Like the managers, the players are now at their most valuable and are likely to be moved on if the right offer comes in. With Lille’s issues and PSG’s unlimited funds and desire to regain their crown, something like this is unlikely to happen for at least another decade.

What Galtier has achieved with this squad of castaways has been unbelievable. Savour it. As we watched the celebrations unfold in the town centre, with overflowing joy bringing people together, it's a reminder that football isn’t about finances, and it never will be. The richest squads and the best paid players may tip the scales in PSG’s favour, but they can never guarantee success.

Lille - Champions of France for the fourth time in their history.