Day Two of the Grand National Festival at Aintree and plenty more competitive racing to try and find the winners of. Fingers crossed for a warmer and drier day, but those prayers may not be answered.

Nicky Henderson has trained three winners in the last eight running’s of this race and has three with chances in the 2022 running.

Broomfield Burg steps up in trip having been favourite for the Betfair Hurdle but managed only seventh and didn’t fare any better in the County Hurdle. BALCO COASTAL was pulled up at Sandown in the Imperial Cup despite being sent off the 9/2 favourite but the ground rode quite tacky there and I can see this strong travelling type fairing much better here. He didn’t quite see out this trip at Cheltenham in Trials Day but on a flatter track and a decent pace to aim at, I can see him going close.

Fils D’Oudairies completes the Seven Barrows trio and ran an eye-catching race when second at Ascot on stable debut but I’m not sure a 2lb rise was warranted and this is tougher.

The world and his wife were on Langer Dan in the Martin Pipe at Cheltenham but knew their fate early when he was brought down and I expect punters may go in hard again to gain compensation. He is short enough in the market though despite being appealingly handicapped.

All eyes will be on Jonbon here as he bids to go one better than in the Supreme Novices Hurdle, but he looked to have a really tough race there, chasing a red-hot pace and had no answer to his stablemate Constitution Hill in the end. He was well beaten and it’ll be interesting to see if he has been freshened up ahead of his fifth start of the season. At the forecast prices, I will be against him.

Willie Mullins is bringing a small but select team over and his EL FABIOLO was the subject of some good support this week ahead of just his second start for the stable. He won at Tramore on New Year’s Day unchallenged by thirteen lengths and although the trainer put the hood on for the first time, he will have a good guide to the form of the two mile novice hurdle division.

Aucunrisque is another player who won the Dovecote at Kempton in February. He seems to save his best for flat tracks and so bypassed Cheltenham too but that win at Kempton was impressive and he could hit the frame.

What an absolute cracking contest despite just the four runners.

Ahoy Senor had his finest hour here over hurdles last season when landing a 66/1 surprise in the Sefton, beating Bravemansgame. The runner-up has since gained his revenge over fences at Kempton on Boxing Day and also carried a big weight to victory at Newbury against useful novices in his Cheltenham prep.

Ruled out of his Cheltenham run due to the ground, Bravemansgame will be primed for this and his jumping will hold him good stead. It is the jumping department that is the concern for Ahoy Senor, who has made a few mistakes under pressure at Kempton and at Cheltenham, latterly when chasing home L’HOMME PRESSE and he gets the vote. 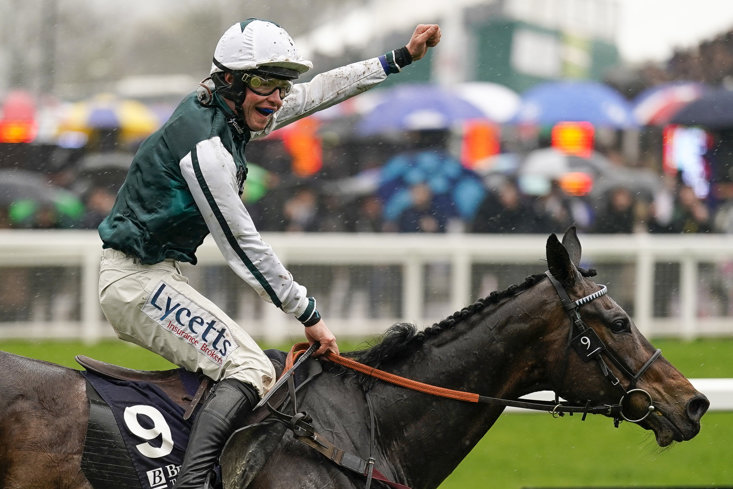 Rarely have two novices jumped as well as L’HOMME PRESSE and Bravemansgame but there is no doubt that Venetia Williams' charge has improved in every start and is now a dual winner at the top level. Although all horses had a tough race at Cheltenham, he won the Brown Advisory impressively and looked like a real athlete. If the race doesn’t come too soon, he could be the one to beat.

Fury Road comes over from Ireland and won a G1 at Leopardstown over Christmas but was well held at the DRF and he is taking on the best British novice chasers we have seen for some time.

It is hard to look beyond FAKIR D'OUDAIRIES retaining his Melling Chase title.

With Editeur Du Gite and Allmankind in the line-up, it looks like we are set for a decent pace and the selection is a hard horse to beat at this intermediate trip when Allaho isn’t around and he has his conditions. He had eleven lengths to spare over his rivals last April and although looks like a slightly stronger renewal, he should once again take the honours. He was impressive when landing the Ascot Chase in February and has missed Cheltenham this season to remain fresh.

Funambule Sivola is the obvious danger as his progress continues, but an argument can be made that his recent efforts have fallen apart for him to pick up the pieces, including his second in the Champion Chase and this is his toughest test to date.

The first taste of the Grand National fences for professional jockeys in 2022 courtesy of the ferociously competitive Topham Chase.

SENIOR CITIZEN has placed the last two times he has tackled these fences, third in last year’s contest and then second in the Grand Sefton in November and has plenty of experience ahead of his fourth attempt. He is slightly higher in the handicap now but still has a lovely racing weight of 10-8 and with the Alan King team in decent nick, he should give us an excellent run for our money and something to shout about on the long run-in.

He travelled sweetly into the Greatwood Gold Cup at Newbury last month before being outpaced turning in, just lacking for fitness on his first start for four months. That will have put him spot on for this and I expect a huge run from the 9yo.

With a huge field of thirty runners, I will take a pair of darts.

Mister Coffey was a huge gamble in the Festival Plate at Cheltenham, looking the winner all the way but has a habit of getting beat and the long run-in here around the elbow will give him plenty of time to duck matters again. Five Star Getaway represents the handicap chase king Christian Williams, and he has been well supported in the market off just 10-0 with jockey Nick Scholfield looking forward to a fantastic spin.

Willie Mullins is looking for a third straight win with Galway Plate winner Royal Rendezvous and Annamix going for him, although the latter needs a return to form, and it would be some performance for the top weight to win this off his mark. Killer Clown is a horse who has done a couple of favours of late and if the ground doesn’t deteriorate, he could be a player although his slight preference is for a right-handed track.

Mac Tottie gets in here off the same mark he won the Grand Sefton off in November and Peter Bowen has had plenty of success in this, winning the race four times and jockey Sean Bowen is expecting him to go well.

One that may have been forgotten about though is last year’s runner-up PINK EYED PEDRO. He returns 5lb lower than last year having not won for a while, but he has been very consistent and running well. Three miles on good ground wasn’t probably his cup of tea two stars ago at Ludlow while a fall last time at Hereford isn’t ideal.

But we know horses return here and go well time and again and off a very low weight, with course form in the bag, ideal conditions and with extra places on offer with the bookmakers, he makes it a two pronged attack on the day's big betting race.

SKYTASTIC heads into the Sefton Novices Hurdle unbeaten in four starts, a pair of bumpers and novice hurdles, and steps up to three miles for the first time. He never wins by far but gives the impression he only does enough, and we have no idea just how good he can be. Sam Thomas’ 6yo always finds plenty of pressure as he has proven in all his starts. Although his victim last time was well beaten at Cheltenham, they had pulled a long way clear of the useful third and will have bags of improvement still to come.

He comes into the race a fresh horse too which is another positive bearing in mind that three miles is quite a test for a novice. That slightly counts against Banbridge who had a hard race in a competitive Martin Pipe at Cheltenham but is on a hattrick and on an upward curve still.

Crystal Glory was second to Hillcrest at Haydock last time and can advertise that form for the northern yard of Nicky Richards while Stag Horn, pulled up in the Albert Bartlett, can be expected to be suited better to Aintree judged on his Warwick win with jockey Nick Scholfield adamant that a line can be put through his Cheltenham effort.

Friday’s finale can go the way of Ben Pauling’s SEVERANCE. He caught the eye the way he travelled at Kelso in the Morebattle Hurdle but didn’t find much for pressure up the hill. He has had a small operation on his wind subsequently which should help him see out the race and there is no doubt he is well treated, being dropped 2lb for that fourth placed effort.

He was rated in the 90s on the flat before switching to a hurdles career and he won’t mind whatever happens with the ground. Ben Pauling had a winner at the Cheltenham festival and I think he has a huge chance of adding another here at Aintree.

Whizz Kid has won his last two after debuting in the G1 Tolworth Hurdle behind Constitution Hill and looks the lightly raced improver that punters may latch onto, while Lively Citizen and Hacker Des Places bring top handicap form into the contest having placed in the Imperial Cup four weeks ago.