Ten years ago today, a relatively unknown non-league striker walked through the door at Leicester City for the very first time. He would go on to win them a Premier League title, become one of their best ever players, and write his name into footballing folklore.

Jamie Vardy is synonymous with the label rags to riches. This is a footballer who has not only navigated his way through the English footballing pyramid and worked hard to get to the top, but has proved he deserves to be considered among the very best Premier League strikers.

Leicester City’s leading man has been a revelation since he became a Premier League player and has been a constant source of goals in the top-flight for the last eight seasons. He played a key role in the greatest Premier League title win in history, going on to join the privileged and exclusive few to have scored 100 goals (132 in total) in the division as well as picking up a Golden Boot along the way. Oh, and you can add an FA Cup and FA Community Shield to his honours list.

Today marks the 10-year anniversary of the Sheffield-born striker moving to the King Power Stadium from Fleetwood Town for just £1 million - a fee that will go down as one of the greatest bargains in English football. When he moved to the East Midlands he had already been on an incredible ride in rising through the pyramid. Back when he was playing as a semi-professional he was working as a technician, helping to manufacture medical splints and crutches.

After being born and raised in a city full of footballing history, he shared the dream of millions of young people - to become a professional footballer. While his route was not the most direct, it did produce a fairy tale ending. He was still an unknown entity when he was part of the Foxes team that were promoted to the promised land in 2014. He may have been 27 when he made his debut but he has done incredible things in the years he has spent at the pinnacle of English football. The first real glimpse we got of the Stocksbridge Park Steels graduate’s quality on the big stage was when he scored in Leicester’s unforgettable 5-3 victory at home against Manchester United. 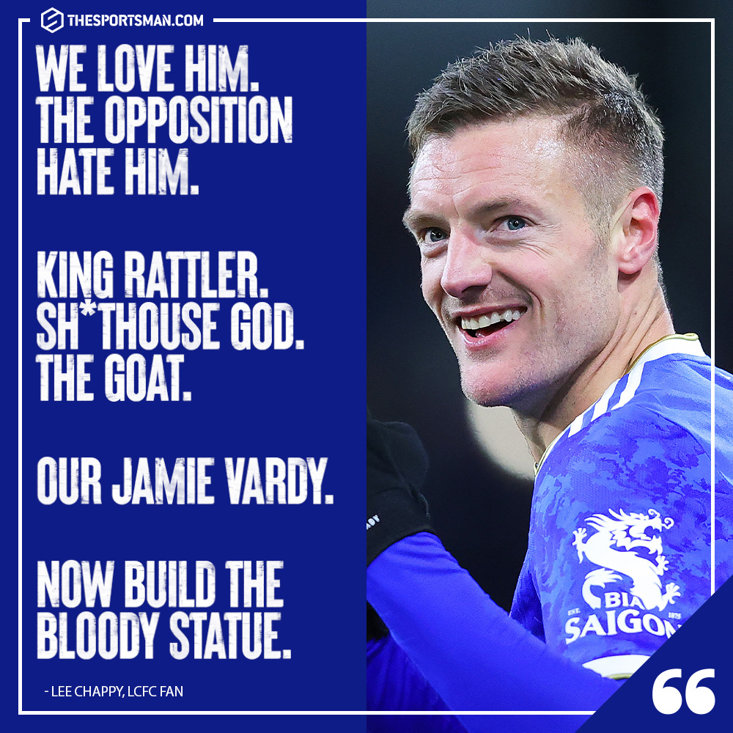 After that first year of experience in the world’s best league, Vardy scored four of his five goals of the season in the final two months of the campaign to help the Foxes complete an impressive great escape. His incredible work ethic earned him a deserved call up to the England squad in May 2015, just another chapter in the amazing career he has gone on to have.

Then came the greatest season of his life, 2015-16. Under the Italian coach Claudio Ranieri, Vardy evolved into one of the deadliest centre-forwards in England and his 24-goal haul helped the Foxes to that 5000/1 Premier League title. You can just picture him now with his spiky hair and blue wrist cast, fueled by Red Bull, brushing past defenders with ease because of his blistering pace.

"Jamie Vardy. Quite simply the greatest Leicester City player of all time," Leicester fan and Jamie Vardy lookalike Lee Chappy tells The Sportsman. "I highly doubt we’ll see another like him ever again, with a story like his. He embodies the Leicester way - Fearless Foxes Never quit!"

"His first season at Leicester didn’t go to plan & I believe he was almost at breaking point to go back Fleetwood. But he didn’t give up and well the rest they say his history! We love him, the opposition love to hate him. King rattler. Sh*thouse God. The GOAT. Our Jamie Vardy. Now build the bloody statue!"

After his title win, Vardy then went on to represent the Three Lions at Euro 2016, scoring in that game against Wales in the group stage, and then at the World Cup in 2018 before stepping aside to allow young players coming through to fight for a chance to make the squad.

This was likely also decided by him to ensure he kept himself sharp so that he could continue to shine as Fantastic Mr Fox and it helped him become a Premier League Golden Boot winner in 2019-20 with 23 goals before helping his side to their maiden FA Cup triumph a year ago. Even now, as a veteran 35-year-old, he is still their reliable goalscorer who they have sorely missed through injury this term. He has had two notable absences and yet has still 14 league goals to his name which just further highlights how truly special a footballer he is.

Vardy is loved and adored by the fans who would seemingly have him playing in their front line even when he is old and grey if he was up to it purely because of what he has contributed to the club over the years and his legacy will live long in the memory of those who had the privilege to watch him week in, week out. 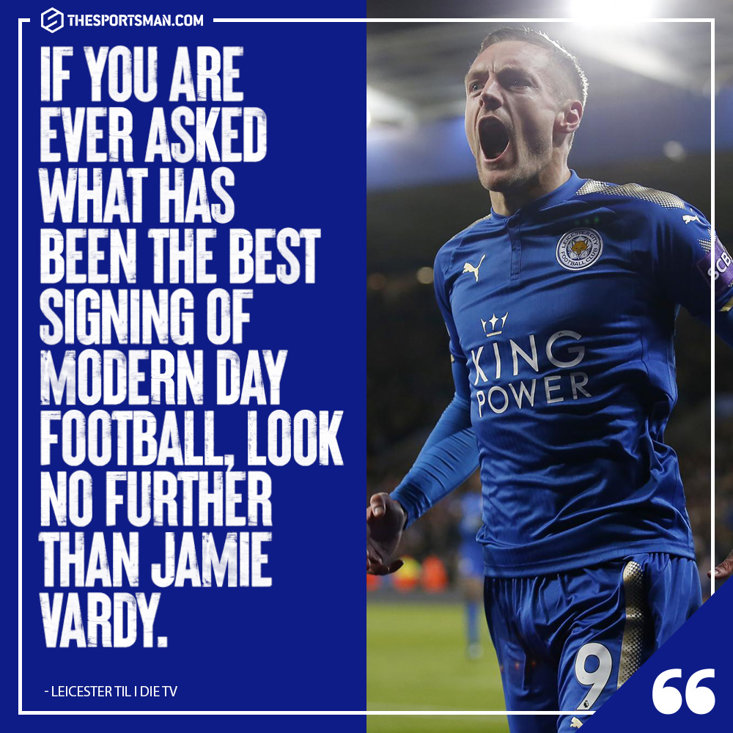 Leicester Till I Die TV told The Sportsman: “If you are ever asked what has been the best singing of modern day football. Look no further than Jamie Vardy. An inspiration to those who don't make it straight away.

“He had a dream and he lived it, and the club stood by him in the bad times, and he has stood by the club. If Jamie Vardy said he would still be playing when he's 40 you couldn't argue. LCFC have had some great names down the years, Banks, Shilton, Worthington, Lineker well you can add Vardy to that list. We love him.”

It has been 10 unforgettable years for a player whose own personal rise has synchronised with that of the club he has called home for the last decade and to mark his 10th year with the Foxes, Jamie Vardy could well be having a party to celebrate the occasion. Bring on the testimonial.