What a year it’s been for sport! Despite the ongoing issues brought around by the Covid pandemic it’s still been a bumper year, full of drama and intrigue.

Our jaws still remain on the floor from following Lewis Hamilton and Max Verstappen’s titanic F1 tussle, while Tyson Fury cemented his place as the best heavyweight in the world with an emphatic conclusion to his trilogy with Deontay Wilder. Elsewhere, a new tennis star was born in US Open winner Emma Raducanu, the Olympics continued to amaze us in the summer and Euro 2020 saw England go on a journey that won’t soon be forgotten.

But what will 2022 hold for us? And more specifically, what will happen first? Bookmakers Betfred have opened up a new novelty market asking that very question. Hamilton, for example, is the 4/1 favourite to win the F1 Drivers’ Championship, which concludes on November 20th, ahead of a variety of other outcomes, including Mo Salah scoring 30+ goals in a calendar year (6/1) or Judd Trump winning the Betfred World Snooker Championship in May (11/2). 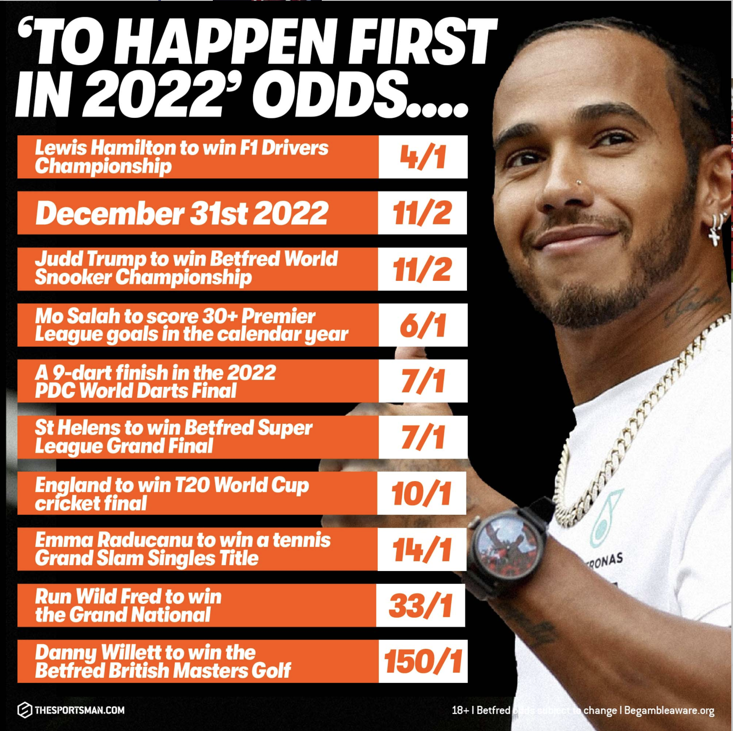 If you think England can win the T20 World Cup in November and before any of the other possible sporting possibilities in the market, you can back it at 10/1. Raducanu is 14/1 to win a Grand Slam title, an English team to win the European Rugby Champions Cup is 16/1 and Danny Willett is 150/1 to win the Betfred British Masters before anything else outright.

What Will Happen First In 2022? Outright Market