Another year in the ring is about to come to a close. We’ve already run through our favourite knockouts of the past 12 months, our men’s and women’s Fighter of the Year, and our pick for the best bout, but what about the upcoming year ahead?

Below we’ve picked out our five fighters to watch out for in 2023.

Jesse Rodriguez came out of absolutely nowhere in 2022. In February, on just seven days’ notice, the San Antonio native took the place of an ill Sriskat Sor Rungvisai to face Carlos Cuadras for the vacant WBC super-flyweight title, stepping up two weight classes in the process. The short notice and weight discrepancy made little difference to ‘Bam’, who dropped Cuadras en route to a convincing unanimous decision (117-110, 117-110, 115-112) on the scorecards.

The American impressively went on to stop former pound-for-pound star Rungvisai four months later, before capping off a tremendous year with a unanimous decision victory over a top contender in Israel Gonzalez.

So what’s in store for the 22-year-old unbeaten star in 2023? Rodriguez vacated his strap in October, since won by Juan Francisco Estrada, and has moved back to flyweight where an array of options await him such as IBF champion Sunny Edwards and WBC king Julio Cesar Martinez. First up though, it looks like Rodriguez is on a collision course to face Mexico’s Cristian Gonzalez for the vacant WBO bauble. 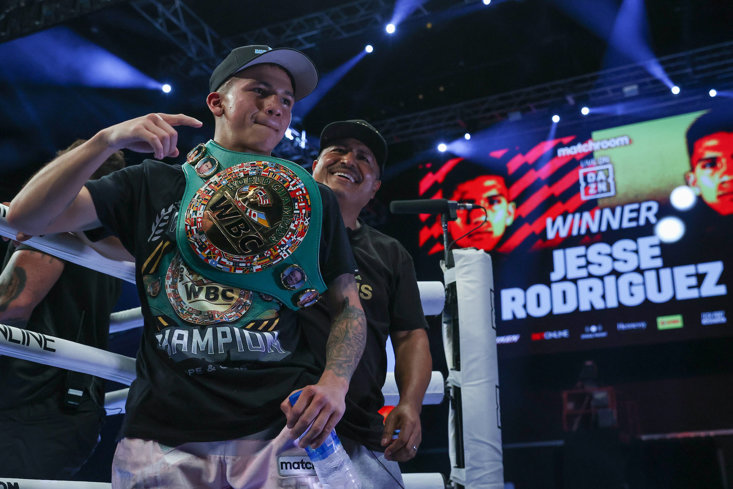 The heavyweight division might see the rise of a new superstar in 2023. Jared Anderson has assembled a mighty impressive 13-0 (13) record since turning professional in 2019.

The 22-year-old American is yet to have an opponent last more than six rounds against him, with ten of his 13 knockouts coming inside the first two rounds and has even drawn comparisons to Muhammad Ali from his promoter Bob Arum.

Comparing him to arguably the greatest of all time might seem a bit premature, but there’s no denying ‘Big Baby’ has the potential to be a superstar. Capping off his year with a second round stoppage of Jerry Forrest, the man from Ohio will now be seeking bigger tests and with fights against the likes of Daniel Dubois, Filip Hrgovic and Arslanbek Makhmudov being mooted for the new year, we expect to hear a lot more from him.

Fresh off the back of signing a new contract with Eddie Hearn’s Matchroom Boxing, Dalton Smith is one of the hottest properties in British boxing right now.

‘Thunder’ had a landmark year in the ring in 2022, winning all four of his fights, stretching his unbeaten record to 13-0, with ten wins inside the distance, while picking up the WBC Silver international and British super-lightweight titles along the way.

Smith is targeting world titles and a stadium fight at Hillsborough, home of his beloved Sheffield Wednesday, in 2023. Whether we’ll see Smith with a world title around his waist this time next year isn’t certain, but what is guaranteed is you do not want to miss the next chapter of one of the most exciting prospects in the world. 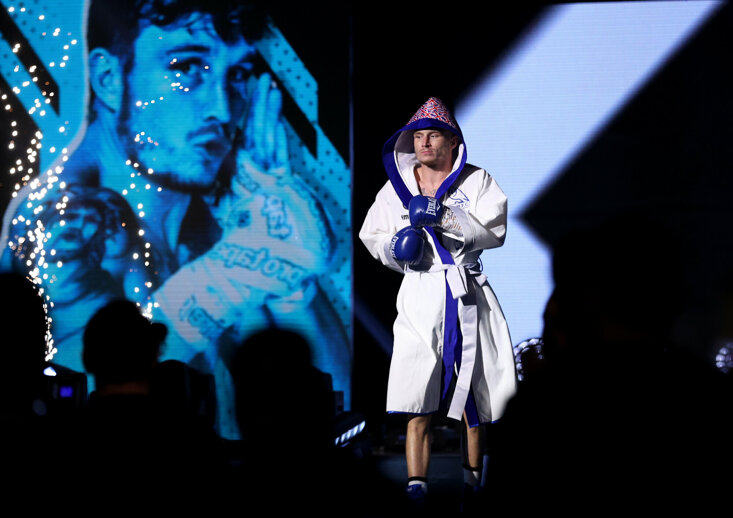 Fresh from his light-heavyweight silver medal win at the Tokyo Games last summer, Ben Whittaker turned to the paid ranks in 2022, signing with BOXXER and working under the guidance of Tyson Fury trainer SugarHill Steward.

The West Bromwich man made a solid start to life in the pros, marking his professional debut in July on the undercard of Chris Billiam-Smith vs Isaac Chamberlain in Bournemouth with a second round stoppage of Greg O’Neill. A month later, Whittaker fought for a second and final time in 2022 with a unanimous decision win over the previously unbeaten Petar Nosic in Jeddah, Saudi Arabia.

Flashy, ruthless and outspoken, Whittaker’s career might only be at an embryonic stage at this point but he’s blockbuster viewing and is destined for superstardom.

Another Tokyo Games graduate, Caroline Dubois, also had a scintillating year in the ring. In a busy opening year as a professional, the 21-year-old silver medallist built up a reputation as something of a knockout artist with four of her five wins finishing inside the distance - twice in the opening round.

Dubois, sister of WBA (regular) heavyweight champion Daniel, told The Sportsman that the last year was about getting used to the pro game and in 2023 she wants to step up to bigger fights and maybe even a world title shot.

After a stunning breakthrough year for the lightweight, we wouldn’t argue with those grand plans.

x
Suggested Searches:
The Sportsman
Manchester United
Liverpool
Manchester City
Premier League
More
boxing
Don't Wait Until Retirement To Appreciate The Hall of Fame-Bound...
Too often in life, we leave it too late to appreciate what we have. Sport is one of the guiltiest avenues [ ... ]
boxing
Boxing's First Tag Team Match And The Weirdest Combat Sports...
Combat sports is in a weird place. The most famous fighter on the planet is a YouTuber who has never [ ... ]
boxing
Anthony Yarde's Defeat To Artur Beterbiev Did More Good Than...
If a fight looks like Mission Impossible and sounds like Mission Impossible, sometimes it simply is [ ... ]
boxing
Caleb Plant Vs David Benavidez: Five Boxing Stories You Might...
With the afterglow of one big British card behind us in Liam Smith vs Chris Eubank Jr and the anticipation [ ... ]
boxing
Why Brave Anthony Yarde Is The Cure For The Common Boxer
In a world with four recognised sanctioning bodies, several unrecognised sanctioning bodies and a litany [ ... ]
boxing
Announcement Imminent: Anthony Joshua Vs Jermaine Franklin At...
Two-time unified heavyweight champion Anthony Joshua is reportedly set to fight Jermaine Franklin at [ ... ]
boxing
Artur Beterbiev And The Hardest Hitting Light-Heavyweights In...
Boxing fans will be treated to one of the hardest-hitting match-ups of the year this weekend when unified [ ... ]
boxing
Floyd Mayweather Vs Aaron Chalmers: Everything We Know So Far
Floyd Mayweather will return to the ring next month to take on former Geordie Shore star Aaron Chalmers [ ... ]
boxing
Boxing's Doomed Superfight: The Long Road To Josh Taylor Vs...
One of the most hotly anticipated fights in British boxing has been delayed yet again. WBO super lightweight [ ... ]
boxing
See You At The Crossroads: What Next For Chris Eubank Jr And...
Liam Smith vs Chris Eubank Jr had all the hallmarks of a crossroads fight. While they are only a year [ ... ]
boxing
Artur Beterbiev Vs Anthony Yarde: Everything You Need To Know...
Boxing fans will be treated to one of the hardest-hitting match-ups of the year this weekend when unified [ ... ]
boxing
Mersey Beat: Liam 'Beefy' Smith Stuns Chris Eubank Jr With Fourth...
Liam Smith stunned Chris Eubank Jr at the Manchester Arena, stopping the pre-fight favourite in four [ ... ]
boxing
Poles Apart: Richard Riakporhe Stops Two-Time World Champion...
Richard Riakporhe scored the biggest win of his career so far, steamrollering former two-time world [ ... ]
boxing
Leave The Memories Alone: Kell Brook Shouldn't Return To Face...
Boxxer CEO Ben Shalom says former IBF welterweight champion Kell Brook is “desperate” to [ ... ]
boxing
Citizen Of The World Alex Dilmaghani Focused On Global Domination
“Why don’t they play football? This is a sport where you get hit and hurt. The way some [ ... ]
boxing
The Day Ali Talked A Suicidal Man Down Off The Ledge Of A Beverly...
Wilshire Boulevard in Los Angeles cuts right through the heart of Beverly Hills. One particularly famous [ ... ]
boxing
Lucrative February Showdown Between Jake Paul And Tommy Fury...
Could it be third time lucky for a blockbuster showdown between Jake Paul and Tommy Fury? Well, according [ ... ]
boxing
''I Shook Up The World!'': The Moment Cassius Clay Truly Became...
On what would have been his 81st birthday, it is only appropriate to pay tribute to the cultural [ ... ]
boxing
Chris Eubank Jr Vs Liam Smith: Everything You Need To Know
Chris Eubank Jr and Liam Smith kick off the New Year in style this weekend when they descend on the [ ... ]
boxing
How To Watch KSI Vs FaZe Temperrr: Undercard, Time, Venue And...
The show must go on. After Dillon Danis’ withdrawal, KSI will now fight gaming YouTuber FaZe Temperrr. [ ... ]
boxing
Australian Heavyweight “One Of The Frontrunners” To Fight Anthony...
Two-time heavyweight world champion Anthony Joshua is expected to return to the ring in April looking [ ... ]
boxing
KSI Vs FaZe Temper: Everything You Need To Know
KSI returns to the boxing ring this weekend as the latest Misfits card hits Wembley Arena. The YouTuber-turned-boxer [ ... ]
boxing
All Aboard: Get On The Jesse 'Bam' Rodriguez Hype Train Before...
You can count on one hand the boxers who had a better 2022 than Jesse ‘Bam’ Rodriguez. The [ ... ]
boxing
Women's Boxing Picks Up Where It Left Off In 2022 With A Huge...
If you thought women’s boxing was leaving its big, history-making nights in 2022 then think again. [ ... ]
boxing
Triple Threat: Eddie Hearn's Three-Fight Plan To Revive Anthony...
Matchroom Sport chairman Eddie Hearn has mapped out Anthony Joshua’s road to heavyweight redemption. [ ... ]
boxing
Manny Pacquiao Signs For Rizin, But Are Exhibitions Damaging...
Manny Pacquiao has announced he will return to the ring for Japanese MMA company Rizin Fighting Federation [ ... ]
boxing
Look Out Spence And Crawford: Could 2023 Be The Year Of Jaron...
Jaron Ennis returns to the ring on Saturday 7th January, ready to kick off what could be the defining [ ... ]
boxing
The Panel: Should Boxing Have One World Champion Per Division?
Welcome to The Panel, where we speak to a group of star names from across the fight game about the big [ ... ]
boxing
Auld Lang Syne Of The Times: Boxing's 2023 New Year's Resolutions
With Christmas out of the way, as we emerge from our turkey-comas and blink into the light of 2023, [ ... ]
boxing
Why Natasha Jonas Is The Sportsman's Women's Boxer Of The Year
2022 was truly the year of women’s boxing. Katie Taylor and Amanda Serrano headlined Madison Square [ ... ]