Boxing
News
To celebrate Floyd's 44th birthday, we take a look at five of his best performances in the ring
Kieran Spratt
23:30, 24 Feb 2021

Undefeated in 50 professional fights, the winner of 15 major titles in five different weight-classes and one of the greatest boxers to ever grace the ring, Floyd Mayweather Jr is bona fide boxing royalty.

From turning pro in 1996 to his retirement (of sorts) in 2017, there’s never really been a dull moment in the career of the self-proclaimed ‘Best Ever’ and to mark the master pugilist's 44th birthday, we’ve had a look at five of his five best performances… 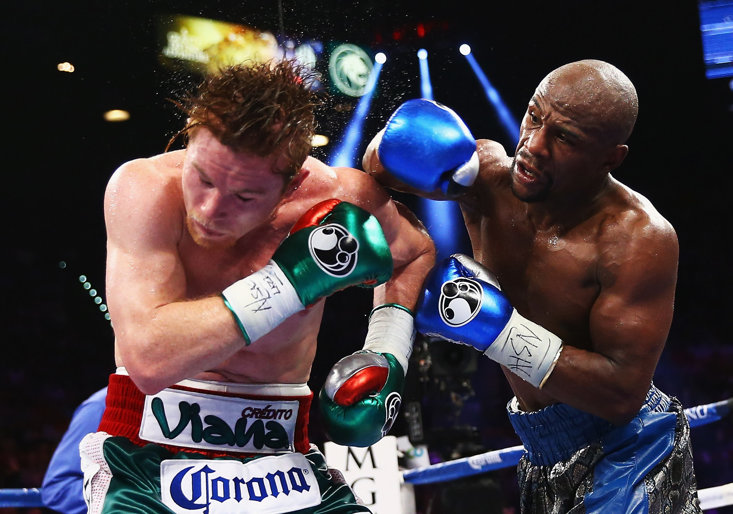 Younger, stronger and himself unbeaten, Canelo was dubbed as the person to finally beat Mayweather in the run up to this one but those predictions would ultimately prove foolhardy as the older man completely outclassed the man who would become a superstar in his own right.

Floyd took a 12-round majority decision victory on the judge’s cards but the fight will perhaps be best remembered for CJ Ross’ infamous and utterly bonkers score of 114-114. Mayweather also made a tidy $41.5million for this fight.

Another fighter who saw his unbeaten record crumble at the mystic hands of Mayweather, this time it was British favourite Ricky Hatton who felt his wrath. With an army of boozy fans cheering him on from the stands, Hatton fought bravely, and may even have had more success had referee Joe Cortez not been so quick to split things up when the two fighter’s got close. But it wasn’t to be and Cortez halted the fight in the tenth after Hatton was dropped twice by the American.

The Mancunian joked in the aftermath that the win was “a fluke” but in reality it was another showcase for Mayweather’s excellence. 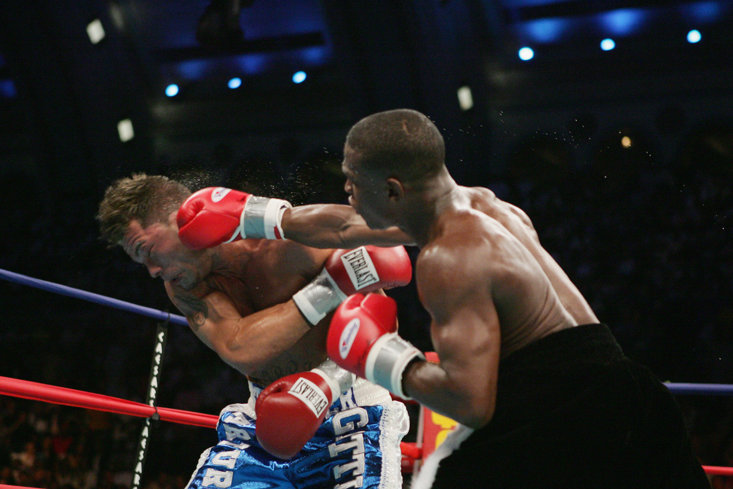 Arturo Gatti is undoubtedly one of the toughest men to step foot in the ring but when he clashed with Mayweather in 2005 he was given a savage beating. ‘Thunder,’ a man whose brawling style was capable of giving any fighter a nightmare, elected to try and box Mayweather, a decision he would pay dearly for. After six rounds of being bullied by Mayweather, and with serious swelling around both eyes, the Canadian’s trainer Buddy McGirt was forced to throw in the towel

A defensive wizard, there were very few fighters that ever really gave Mayweather any real trouble in the latter stretch of his career. ‘Sugar’ Shane Mosely, a boxing legend in his own right, came the closest to ever knocking out the elusive master of defence in the second round of their 2010 bout, when a vicious right gave Floyd a serious case of wobbly legs. Nonetheless Mayweather survived to run out a clear winner on the cards. 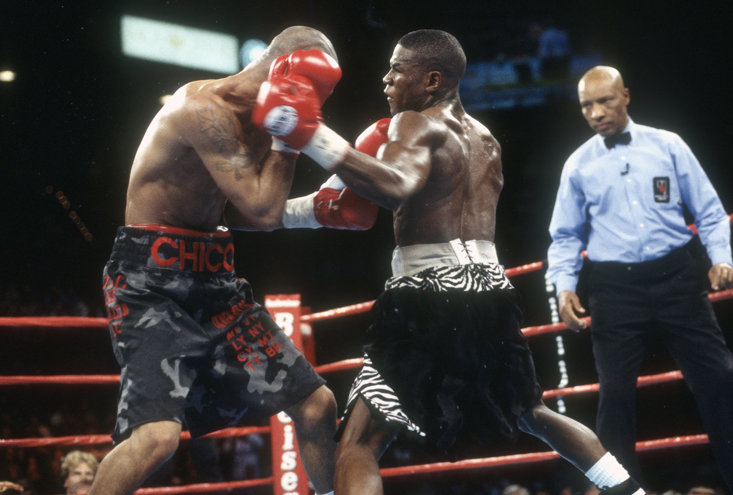 Not yet the PPV star we would all eventually know him for, the 2001 bout with Diego Corrales was something of an introduction to the world for Mayweather. Corrales, a man who had a penchant for a knockout, was unbeaten and the slight betting favourite going into this one but was completely routed by “Pretty Boy” Floyd.

By the time of Corrales' stoppage in the tenth, he’d only won one round, had been dropped five times, three times in the seventh, and at no point looked like troubling his opponent. This was vintage Mayweather.

x
Suggested Searches:
Tyson Fury
Manchester United
Marcus Rashford
Lewis Hamilton
F1
Air Jordan
More
boxing
De La Hoya In ''Talks'' With Eddie Alvarez, Five Boxing Stories...
Oscar De La Hoya has found his “big name” UFC opponent, Anthony Joshua and Tyson Fury’s [ ... ]
boxing
Claressa Shields Finds Opponent And Venue For MMA Debut In June
Two-time Olympic gold medallist Claressa Shields has found an opponent and venue as she makes the swap [ ... ]
boxing
Chris Eubank Jr Wants ''End Game'' Gennady Golovkin And Targets...
Chris Eubank Jr may have been out of the ring for the entirety of 2020 but he returns on May 1 in Manchester [ ... ]
boxing
Paintball, Pogba and Me: Marcus Morrison Talks Football And...
Marcus Morrison will soon take aim at Chris Eubank Jr, but it won’t be the first time he has had [ ... ]
boxing
Evander Holyfield, 58, Set To Take On Former Mike Tyson Foe...
Heavyweight legend Evander Holyfield looks to have found an opponent for his long speculated return [ ... ]
boxing
Conor Benn Destroys Samuel Vargas In Just 80 Seconds And Calls...
Conor Benn was in explosive form on Saturday night, blitzing Samuel Vargas with a swathe of shots which [ ... ]
boxing
“Mature” Conor Benn Confident He’ll Rise To The Challenge Against...
Conor Benn takes another step up in his promising career on Saturday night when he takes on grizzled [ ... ]
boxing
Whyte Willing To Go To Alabama For Wilder Fight, Five Boxing...
Dillian Whyte is willing to go to Alabama to set up a clash with Deontay Wilder, Claressa Shields is [ ... ]
boxing
Eddie Hearn Would Love To See A Two-Fight Series Between Ngannou...
Last week, newly-crowned UFC heavyweight champion Francis Ngannou announced his long held desire to [ ... ]
boxing
Amir Khan Warns Conor Benn Of 'Dangerous' Samuel Vargas Threat
Amir Khan has warned Conor Benn to be wary of Samuel Vargas’ "dangerous" power [ ... ]
boxing
Carl Frampton Calls Time On Stunning Career After Losing Record...
Carl Frampton has called time on his brilliant boxing career after his bid to become a three-weight [ ... ]
boxing
Conor Benn Targets Khan Or Brook, Five Boxing Stories You Might...
Conor Benn is targeting a big domestic bust-up, Devin Haney has found a test at lightweight and one [ ... ]
boxing
Everything You Need To Know About The Most Advanced Boxing Game...
Fight fans, rejoice. There’s finally a new boxing video game en route and boy, does it look [ ... ]
boxing
Dillian Whyte Ready To Fight Deontay Wilder Or Andy Ruiz Jr,...
Dillian Whyte is ready to take on Deontay Wilder or Andy Ruiz Jr after defeating Alexander Povetkin, [ ... ]
boxing
Forget The Year Of The Ox, Frampton’s Ready To Make It The Year...
It’s been one hell of a ride for Carl Frampton. He was already a two-weight world champion, the [ ... ]
boxing
Josh Warrington Seeking To Put Things Right Against Lara, Insists...
Josh Warrington will get back in the ring with Mauricio Lara to "put right" the shock [ ... ]
boxing
Dillian Whyte Blitzes Alexander Povetkin In Four Rounds To Gain...
Dillian Whyte gained revenge over Alexander Povetkin in Gibraltar on Saturday night, stopping the Russian [ ... ]
boxing
Campbell Hatton Makes Dad Ricky Proud With Professional Debut...
Campbell Hatton kicked off his professional career with a win by beating Jesus Ruiz (0-11) via [ ... ]
boxing
De La Hoya, 48, Signs Multi-Fight Comeback Deal, Targets ‘Big...
Eleven-time world titlist and six-weight world champion Oscar De La Hoya has confirmed that on July [ ... ]
boxing
Repeat Or Revenge? Heavyweight Rematches Dillian Whyte Can Take...
On Saturday night, Dillian Whyte heads to Gibraltar in search of revenge against Alexander Povetkin [ ... ]
boxing
Dillian Whyte In Great Shape And Blocking Out Background Noise...
Dillian Whyte insists he “doesn’t care” about outside opinions on his rematch with [ ... ]
boxing
AJ Vs Fury Could Happen At Wembley - Five Boxing Stories You...
The son of British boxing royalty makes his professional debut this weekend, Vasyl Lomachenko has finally [ ... ]
boxing
Whyte Out To Bounce Back And Prove The Doubters Wrong Against...
Dillian Whyte has vowed to prove wrong anybody who has written him off in the past and insisted he will [ ... ]
boxing
''I Want It All'' - Okolie Targets Mairis Briedis And Cruiserweight...
Lawrence Okolie looked sensational when he stopped Krzysztof Glowacki inside six rounds at the SSE Arena [ ... ]
boxing
Povetkin Dismisses Dillian Whyte's Coronavirus ''Excuse'' Claims...
Alexander Povetkin has insisted that he had a positive Covid-19 test which forced the rescheduling of [ ... ]
boxing
How Muhammad Ali Vs Chuck Wepner Helped Inspire Stallone To...
The story of Rocky Balboa has drawn influences from a number of real-life boxers but until recently the [ ... ]
boxing
From Gibraltar To The Playboy Mansion: Boxing's Most Unusual...
This weekend Dillian Whyte goes to Gibraltar in search of revenge over Alexander Povetkin after suffering [ ... ]
boxing
Lawrence Okolie Stops Glowacki In Six To Capture WBO Cruiserweight...
A British, European, Commonwealth and now world champion - it’s fair to say that Lawrence Okolie [ ... ]
boxing
Mike Tyson Targets Return In May - Five Boxing Stories You Might...
The Baddest Man on the Planet is set to return to the ring once again, Floyd Mayweather is eyeing up [ ... ]
boxing
Okolie Expects To Be Spoken To With ''Respect'' If He Wins World...
Lawrence Okolie expects to be spoken to with “an element of respect” if he beats Krzysztof [ ... ]