Sports
News
Following on from Nice vs Marseille's abandonment at the weekend, we look at the other sporting events that took a turn for the worst
Conor Keane
18:02, 23 Aug 2021

Last night we saw the match between OCG Nice and Marseille abandoned as a result of disgraceful behaviour from the home fans.

The Nice fans threw a bottle at opposition player Dimitri Payet, and it caught him in the face. In retaliation, the French international threw the bottle back and the crowd then surged forward to get to the Marseille players and the unsavoury scenes caused the match to be postponed.

Following a long delay, the home players returned to the pitch to finish the game but the Marseille players refused to complete the match, causing the game to be abandoned. Today, after shameful events, Ligue de Football Professionel, French football’s governing body, said that both clubs had been summoned to its disciplinary commission on Wednesday.

With everyone being glad to have football stadiums filled with fans again, it was disappointing to see the events that unfolded in this Ligue 1 clash last night as it shows a side of the game that should have been stomped out long ago – and this is not just exclusive to football.

There have been many incidents across history where sport has been soured by confrontations between players and crowds. Here are a few of some of the worst. 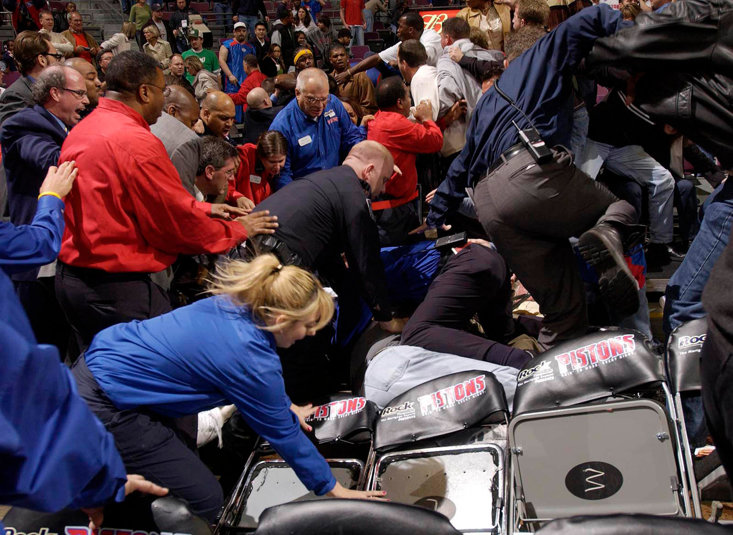 Malice at the Palace

In 2004, an NBA clash between the Indiana Pacers and the Detroit Pistons was etched into the sport’s long and storied history, but for all the wrong reasons. In the dying stages of the game, The Palace of Auburn Hills fell into darkness after Pistons center Ben Wallace reacted badly to a challenge by Ron Artest of the Pacers.

The incident escalated when a drunken Detroit supporter threw a beer cup at Artest and initiated a huge brawl inside the venue. When all was said and done, the NBA suspended nine players for a total of 146 games, leading to the players losing $11 million in salary. Five players were charged with assault, and eventually sentenced to a year of probation and community service, whilst five fans also faced assault charges and were banned from attending Pistons home games for life.

Widely considered one of, if not the lowest moment in boxing, the scenes that followed as Marvin Hagler defeated Alan Minter were shocking. The American did not have the time to celebrate his victory over the Brit at Wembley Arena as the English crowd, who were unhappy at seeing Minter get battered, along with Carlos Berrocal stopping the fight, plunged the venue into chaos.

The ring was engulfed in beer bottles and cans and Hagler was covered by his corner to protect the new champion. With the help of police, Hagler and his team were taken to safety, his night ruined by the crowd. He vowed that he would never fight in England again after what unfolded. 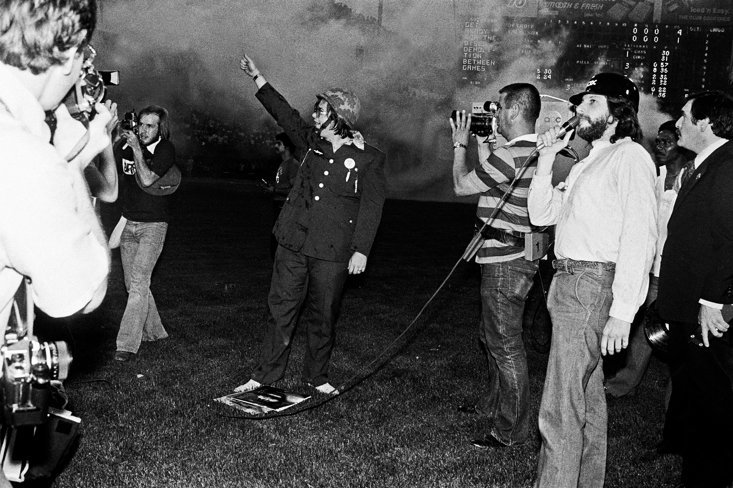 This infamous baseball game ended with riot police battering their way through crowds, followed by an explosion that caused serious damage to the field and stands at Comiskey Park. The bizarre cause of this incredible riot: disco.

Disco peaked in the 70s and the explosion, which was the climax of the events that unfolded on this summer day in 1979, was made up of disco records. The riot was incited by rock music listeners who despised disco and they were influenced by anti-disco Chicago DJ Steve Dahl. After the detonation of the vinyl records, thousands of fans stormed the field and had to be dispersed by the riot police.

This one of the worst days in MLB history and it resulted in the second game between the two sides getting forfeited by the White Sox on the orders of American League President Lee MacPhail.

On the day of the Copa del Rey final in 1984, Barcelona squared up against Athletic Bilbao (now Athletic Club) at a time where there was a lot of hatred between the two sides and it escalated at Santiago Bernabeu, the home of Real Madrid, a club despised by both groups of supporters.

Athletic won the game 1-0 and Diego Maradona, whose ankle was broken by Andoni ‘the Butcher of Bilbao’ Goikoetxea a year prior, was unable to get his revenge - on the pitch, at least. At the full-time whistle, the legendary Argentine saw red, figuratively and literally, when he promptly began to attack the opposition players.

His first target was a player who did not even come off the bench, Miguel Angel Sola. Maradona knocked him to the floor and then kneed him in the face, knocking him unconscious. At this point a huge melee had begun across the pitch. Maradona led his Barcelona teammates by kung-fu kicking anyone wearing red and white – forcing Athletic players to pause their celebrations and retaliate.

Riot police were called in to escort the Barcelona players off the pitch, using their shields to block missiles thrown by the Athletic supporters. Maradona, with his shirt ripped, remained in the centre until security came and urged him away.

x
Suggested Searches:
Manchester United
Liverpool
Manchester City
Marcus Rashford
Premier League
More
sports
From Anthony Joshua to Cristiano Ronaldo, The Sportsman’s 2187/1...
The weekend is fast approaching which can only mean one thing, The Sportsman’s weekly accumulator [ ... ]
sports
Prince, Tyson Fury, Jose Mourinho - Sport's Greatest Ever Press...
Nobody does press conferences like the world of sport. Whether it’s Premier League managers directing [ ... ]
sports
How Elite Athletes Like Ronaldo And LeBron Have Adapted Their...
Cristiano Ronaldo’s goal for Manchester United in their 2-1 loss to Young Boys last night showed [ ... ]
sports
Teenage Kicks: Raducanu Joins Elite Group Of Top British Sporting...
Emma Raducanu stunned the world with her incredible US Open final win in straight sets over Leylah Fernandez. [ ... ]
sports
Enter The Dragon: Bryan Danielson Shakes Off ‘Daniel Bryan’
Daniel Bryan is dead. Long live ‘American Dragon’ Bryan Danielson. Whatever you know him [ ... ]
sports
The Shape Of Punk To Come: AEW Return To Chicago For All Out
AEW returns to pay-per-view with All Out on Sunday night, broadcasting live from the Now Arena in Chicago, [ ... ]
sports
Rebuilding Ric Flair: How Vince McMahon And Triple H Saved 'The...
‘Nature Boy’ Ric Flair returned home on Sunday night, when he made his return to the National [ ... ]
sports
The Superhuman Superstars Inspiring A New Generation At The...
The Paralympics are well underway and some of the most inspirational humans the world has to offer are [ ... ]
sports
From Undisputed To A Little Bit Of The Bubbly, Chris Jericho's...
Wrestling legend Chris Jericho will put his career on the line when he faces MJF at AEW All Out on 5th [ ... ]
sports
Many Happy Returns - Becky Lynch And Brock Lesnar Shake SummerSlam
‘Comeback’ was the key word at WWE Summerslam on Saturday night as over 50,000 fans at Allegiant [ ... ]
sports
Sports vs Videogames: When Tyson, Zlatan and LeBron Raged Against...
After a drawn-out legal dispute, Manchester United will be renamed ‘Manchester UFC’ on the [ ... ]
sports
From Ruthless Aggression To Out-Rapping The Rock, John Cena’s...
John Cena takes to the ring on Saturday in his first pay-per-view main event for over three years, when [ ... ]
sports
CM Punk Prepares To Return - Will He Drop Another ‘Pipe Bomb’?
While nothing is 100% sure in the world of pro wrestling, all credible indicators point to the fact [ ... ]
sports
WWE SummerSlam Brings Cena, Edge And More To Nevada
SummerSlam has traditionally been WWE’s second-biggest event of the year, below only WrestleMania [ ... ]
sports
Farewell Tokyo, Hello Paris! How Will Team GB Look At The 2024...
So the curtain has come down on Tokyo 2020 and although this was the ‘extended version’ [ ... ]
sports
Kenny's Keirin, Brown's Bronze & The Sportsman's Highlights...
The Tokyo 2020 Olympic Games might be over but they have left The Sportsman’s team with plenty [ ... ]
sports
Another Astonishing Olympics For Team GB - But Is This The Peak?
We didn’t know if it would even take place, but the sun has set on a Tokyo Olympics that has thrilled [ ... ]
sports
Day 14 Olympics Round-Up: Kenny Becomes First Female Brit To...
We are in the final straight of the spectacle that is Tokyo 2020 and while this great Olympics is drawing [ ... ]
sports
Day Eleven Olympics Round-Up: Thompson-Herah Wins Double-Double...
An astonishing day of Olympic action unfolded in the Japanese capital as there were more golds for Team [ ... ]
sports
Mixed Events Are Here To Stay After Team GB's Tokyo Olympics...
Tokyo 2020 has seen the introduction of some new encapsulating mixed events that could be the future [ ... ]
sports
Italy Continue To Defy The Odds As Perfect Summer Continues...
There could be no such thing as the perfect summer of sport, but if there is, Italy are experiencing [ ... ]
sports
Day Ten Olympics Round-Up: GB Win Eventing Gold As Simone Biles...
Day 10 of Tokyo 2020 had plenty to offer as Team GB claimed another gold to add to their impressive [ ... ]
sports
Day Eight Olympics Round-Up: Relay Gold For Team GB Despite...
Team GB enjoyed more success on day eight of Tokyo 2020 as further history has been made in these historic [ ... ]
sports
From Dina To Daley, Here's What's In Store For Week Two At Tokyo...
The first week of Tokyo 2020 has been full of excitement and has produced some great entertainment. [ ... ]
sports
Day Five Olympics Round-Up: Mallory Franklin Takes Silver In...
Day six of Tokyo 2020 brought more excitement and Great Britain managed to pick up a few more medals [ ... ]
sports
From Raging Bull To Rudy, Ten Of The Greatest Sports Biopics...
This week saw the trailer drop for King Richard, a brand new biopic of Richard Williams, father [ ... ]
sports
Day Five Olympics Round-Up: GB Relay Team Storm To Gold & Dujardin...
Tokyo 2020 continues to thrill, with Great Britain collecting more medals on Wednesday and some high-profile [ ... ]
sports
Simone Biles Should Be Applauded For Her Withdrawal, Says Mental...
Simone Biles’ decision to withdraw from the all-around gymnastics final has been applauded by [ ... ]
sports
Day Four Olympics Round-Up: More Medals For Team GB In Best...
Great Britain has never had such a successful start to an Olympic Games. As day four comes to a close, [ ... ]
sports
Tokyo Olympics Day Three Round-Up: Team GB Enjoy A Magic Monday
It was a thrilling Monday for Team GB as the squad brought home five medals, including three golds, [ ... ]