Football
News
Ahead of tonight's Championship action, we look back at five of the greatest playoffs matches ever
Kieran Spratt
13:30, 17 May 2021

The play-offs kick off this week, beginning with Bournemouth vs Brentford and Barnsley vs Swansea City in the Championship’s first-leg ties on Monday night. The season-ending deciders have fascinated football fans since their introduction in 1987 and they often provide some of the best entertainment across the entire season.

Some play-off games, however, go above and beyond in the excitement stakes and a few will even go down as some of the best games in English football over the last 30 or so years. From last-gasp winners to goal-scoring bonanzas, we take a look at five of the greatest play-off ties ever.

Eight goals, two red cards and three penalties made the second-leg meeting between Sam Allardyce’s Bolton Wanderers and George Burley’s Ipswich Town one of the most scintillating matches in play-off history.

After a Marcus Stewart brace rescued a draw for the Tractor Boys at the Reebok Stadium, the tie was finely poised at 2-2 going into the decider at Portman Road. Ipswich, who had lost out in the play-offs for two seasons running, fell behind three times in the return leg only for Jim Magilton to equalise each time. His third was a spectacular volley in the final minute of normal time to level the scores at 3-3. 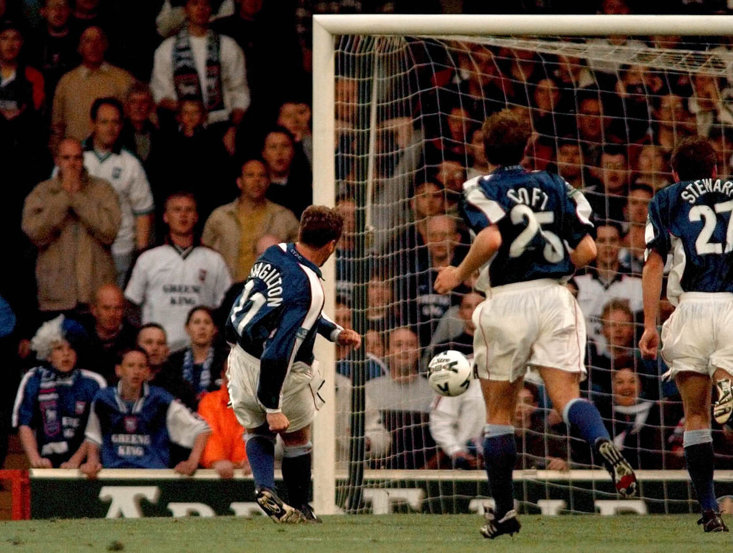 Late dismissals for Bolton’s Mike Whitlow and Robbie Elliott left Allardyce’s men with work to do in extra-time, and Ipswich made the two-man advantage count, wrapping up the game with goals from Jamie Clapham and Martijn Reuser. Ipswich would meet Barnsley in the final, another play-off thriller, beating the Tykes 4-2 to return to the Premier League.

If you could hop in a time machine to May 30, 1999, head to Wembley and tell the thousands of Man City fans watching their beloved club take on Gillingham in the Division Two play-off final that in 20 years’ time they’d be considered one of the finest teams in the world, they would probably have laughed in your face.

Their side were considered huge favourites for the title that season but were forced to make do with a run in the play-offs instead after a disappointing first season in the third tier, their lowest ebb as a club. After edging past Wigan Athletic in the semis, Joe Royle’s side found themselves 2-0 down early on against Gillingham in the final. Kevin Horlock and Paul Dickov came to the rescue to save City with goals in the 90th and 95th minute respectively, taking the game to extra-time and eventually penalties. In the shoot-out, goalkeeper Nicky Weaver’s crucial save and subsequent celebration became the stuff of Cityzens folklore.

The club’s rise has been meteoric since but where would they be now if it wasn’t for Messrs Dickov, Horlock and Weaver?

What is there to say about this one that hasn’t already been said? It’s an incredible play-off that was capped off by simply one of the most bonkers endings to a football match ever.

With the tie between the Foxes and the Hornets level at 2-2 on aggregate, Leicester won a controversial penalty in the last minute of the game - score and they would go through to Wembley.

Anthony Knockaert stepped up, missed thanks to a brilliant double save by Manuel Almunia and, with seconds left to play, Watford sprung a blistering counter-attack. Fernando Forestieri had space to deliver a cross which Jonathan Hogg knocked down for Troy Deeney to rifle into the net and the rest is history.

On the brink of top-flight football for the first time in their history, player-manager Glenn Hoddle’s swash-buckling Swindon Town faced Leicester City in the play-off final. The Robins, tasting history, started like a house on fire and were 3-0 up by the 53rd minute. But 16 minutes later, they had capitulated and it was 3-3.

With less than 10 minutes to go, Swindon were awarded a penalty which was duly dispatched by Paul Bodin to earn a 4-3 win and cement legendary status for Swindon’s class of ‘93. Hoddle, who played the full 90 minutes, would join Chelsea in the summer, while Swindon’s first season in the Premiership ended in disappointment, finishing rock bottom with 100 goals conceded.

The go-to answer when discussing the greatest play-off ties of all-time. As these two sides made their way out in front of the famous old Twin Towers it was Sunderland who were well-fancied to continue their solid league form and gain promotion, but nobody could have anticipated what was about to unfold on that spring day at Wembley. 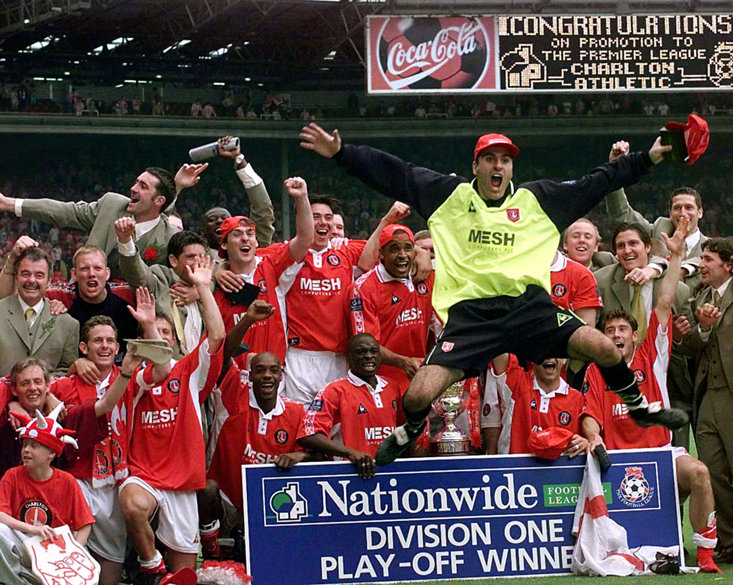 Charlton emerge victorious in arguably the greatest playoff match ever

Clive Mendonca gave the Addicks an early lead but Sunderland would go in front three times, including in extra-time thanks to a Nicky Summerbee strike.

Mendonca, however, became the first player to score a hat-trick in a play-off final, and his 103rd-minute goal incredibly made the game level again at 4-4. In the subsequent penalty shoot-out, the first 13 penalties were confidently converted until Michael Gray stepped up and had his spot-kick saved by Charlton goalkeeper Sasa Ilic, taking Alan Curbishley’s side to the Premier League.