It’s been a busy weekend in the sporting world and whilst most of the talk might have been around Chelsea’s Champions League final victory over Manchester City or Naomi Osaka’s continued battle with the tennis authorities at the French Open, there were plenty of other stories that went under the radar.

From the Indy 500 to the Giro d’Italia, here are five sports stories you might have missed this weekend...

Helio Castroneves became the fourth driver to win the Indy 500 for the fourth time with victory in Sunday's 105th instalment of the iconic race.

"I still got it, don't you think?" said Castroneves. "Tom Brady won the Super Bowl. Phil Mickelson won the PGA. The old guys still got it.

"We're still kicking the young guys' butt. We'll teach them a lesson. We've still got it."

The race was held in front of a crowd of 135,000 - the world's largest sporting event since the start of the pandemic. 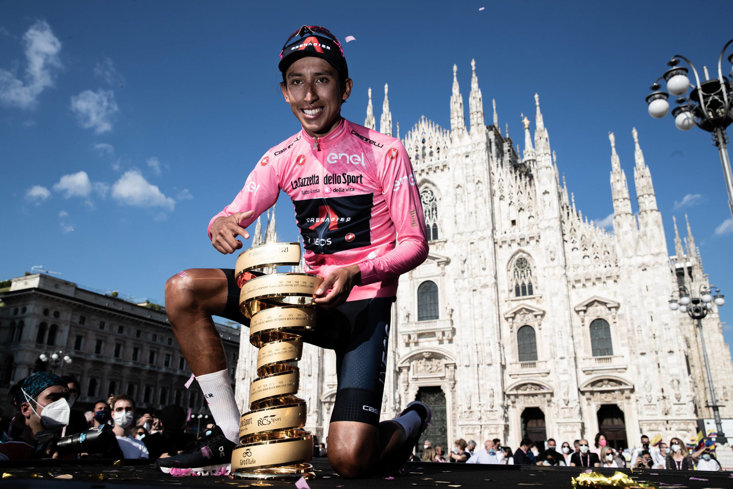 The Colombian finished with a safe ride in the final time trial, a 30.3-km effort around Milan, to beat Italy’s Damiano Caruso by one minute 29 seconds, based on provisional results.

The 24-year-old, whose 2020 season was hampered by back problems after he won the 2019 Tour de France, said, “I was just focused on my effort, thinking I can’t do a mistake, I don’t want to lose the Giro in one corner.

“I was starting to push in the parts where I could push but in the corners I don’t take any risks. I think it was the first time trial I enjoyed. I always suffer in the time trials but today was a special one.

“There were a lot of Colombian flags and all the people cheering for me when I arrived and I realised I had won it was an incredible feeling. I cannot describe what I’m feeing inside of me.”

Lancashire secured their first County Championship win over Yorkshire at Old Trafford for 21 years in an absolute thriller.

Yorkshire fought hard to secure a draw but victory was secured inside the last 30 minutes when they were bowled out for 271 in their second innings to give Lancashire victory by an innings and 79 runs.

Lancashire fast bowler Saqib Mahmood, who led the way with five wickets, told BBC Radio Lancashire, "Possibly the best feeling I've had on a cricket field. My throat's gone after the end there.

"We said at tea that we've been in that sort of position twice already this season and we had to just keep grafting hard for wickets right to the end.

"Having the crowd back in definitely helped us. I was really tired going into that last spell and then suddenly, you pick up a wicket and the crowd picks you up and you don't feel tired any more.

"It was a great team effort. Everyone stuck to their roles and contributed throughout the four days. To take five wickets in a Roses match makes it even more special." 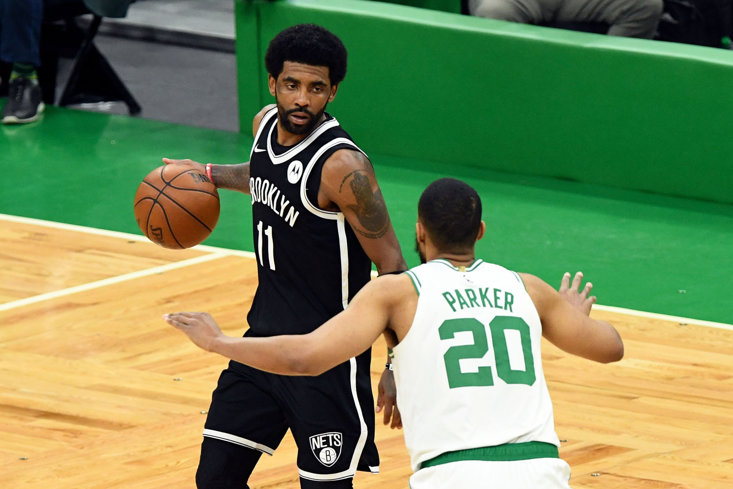 A fan was arrested during Brooklyn Nets’ 141-126 win over the Boston Celtics on Sunday after throwing a bottle at Kyrie Irving, prompting the guard to say that supporters are treating players “like they’re in a human zoo”

The bottle narrowly missed Irving as he left the court following the victory and he believes the sport is now “at a crossroads” after five spectators were given indefinite bans after separate incidents last week. Washington Wizards point guard Russell Westbrook had to be restrained by security after a fan poured popcorn over him.

"It's been that way for entertainment for a long time with underlying racism and just treating people like they are in a human zoo," Irving added.

Irving scored 39 points as the Nets took a 3-1 play-off series lead with the win over the Celtics.

Rosberg X Racing Make It Two From Two In Extreme-E

Rosberg X Racing made it two wins from two in the new Extreme E season after snatching victory in the Ocean X Prix in Senegal this weekend, surviving a clash in the final with X44, Lewis Hamilton’s team.

RXR drivers Johan Kristofferson and Molly Taylor continued to set the pace in Extreme E after claiming in the series opener in Saudi Arabia in April, but they had to dig deep to secure victory in Dakar. Taylor was in the car for the first lap of the final, and found herself wheel-to-wheel with Christina Gutierrez in the X44 car that had set the pace in qualifying. The two cars touched and ultimately sent Gutiérrez off the track into a dune, ruling the team out of the race with suspension damage.

Next up on the Extreme E calendar, the teams head to Kangerlussuaq in Greenland between August 28-29.

x
Suggested Searches:
Manchester United
Liverpool
Manchester City
Marcus Rashford
Premier League
More
sports
England’s Croquet Five Lions Conquer Scotland To Bring It Home...
It was all a world away from the frenzied hype of Euro 2020 gripping the nation. But on five beautifully [ ... ]
sports
The Hulk To ‘The Mountain’, Five Monster Moments From The World’s...
Since its debut in 1977, The World’s Strongest Man has become a beloved spectacle to hundreds [ ... ]
sports
Mickelson, Serena And The Sporting Legends Who Turned Back Time...
Sport has always been a young person’s game. For years we have been blown away by the talents [ ... ]
sports
FA Cup, Champions League And UFC 262: Your Weekend Of Unmissable...
With indoor meetings of up to six people permitted from Monday, pubs being allowed to partially open [ ... ]
sports
Five Things You Probably Didn't Know About The Tony Hawk's Pro...
For a number of millennials, few athletes encapsulate their childhood as the skateboarder [ ... ]
sports
The Year Of The Fox: How The Sporting City Of Leicester Emerged...
In 2012, the greatest thing to happen to the city of Leicester was that the remains of King Richard [ ... ]
sports
No Passion, No Point: Eddie Hearn's Podcast Returns For Third...
He’s now as popular, big, and perhaps as bombastic as the boxers he promotes. Eddie Hearn is also [ ... ]
sports
With 100 Days To Go, Team GB Are Already Set For A Historic...
With 100 days until the delayed Tokyo Olympics, Team GB look set to make history before they have even [ ... ]
sports
Ranking The Best And Worst April Fool's Day Pranks From The...
So another April Fool’s Day has come to an end and as the sun sets on what for some jokers is [ ... ]
sports
The Good, The Bad And The Downright Ugly, What Happens When...
Italian giants Inter Milan have revealed a brand new club badge ahead of the Nerazzurri’s 113th [ ... ]
sports
Ahead Of Hendry Vs White, Here Are The Sporting Rivalries We’d...
As Stephen Hendry and Jimmy White are all set to rekindle their famous old snooker rivalry having been [ ... ]
sports
From Bruno Vs Tyson To Last Chance U: Five Must-See Sports Documentaries...
Rejoice! The end of lockdown is nearly in sight. Sadly, there’s still plenty of time until things [ ... ]
sports
From Eddie Hearn To Jamie Carragher, Here Are Five Must-Reads...
It’s the first Thursday of March and that can only mean one thing: It’s World Book Day. [ ... ]
sports
Amateur Sport To Be Allowed In England From 29 March
Outdoor grassroots sports will return in England from 29 March, prime minister Boris Johnson confirmed [ ... ]
sports
Brady's Bromance, Nadal's City Of Love And The Greatest Love...
Roses are Red,  Violets are Blue, We live for sport, And we know you do, too! Valentine’s [ ... ]
sports
Messi Reaches Goal Number 650 At Barca, Five Weekend Stories...
Lionel Messi continued to boggle the mind with the 650th goal of his Barcelona career, Patrick Reed [ ... ]
sports
The Socially Distant Sports Bar Is Like Being In The Pub With...
The day will come. We’ll be back. The beloved British pub will fling its doors wide open once [ ... ]
sports
The Six-Day Plan That Can Turn You Into A Hollywood Hardman...
Is there an actor who represents the quintessential British hardman better than Jason Statham? Probably [ ... ]
sports
It’s Mahomes vs Brady At The Super Bowl, Five Sport Stories...
In a weekend which saw UFC 257 and the FA Cup grabbing a lot of attention, there was plenty of other [ ... ]
sports
Daniel Craig's Full-Body Bond Workout That Will Turn You Into...
The release of No Time To Die is a bittersweet one. On the one hand, after months of Covid-induced delay, [ ... ]
sports
The Super-Quick Routine Jason Mamoa Used To Get Ready For Aquaman
Is Jason Mamoa the coolest actor in the world? Maybe. The Guinness swigging, axe-hurling Hawaiian actor [ ... ]
sports
Max Holloway Is A UFC Record-Breaker, Five Weekend Stories You...
All the attention might have been on the anti-climax that was Liverpool vs Manchester United this weekend, [ ... ]
sports
From Fernando to Maradona, These Are Five Of The Best Sports...
Yep, back again. Nope, not out and about, meeting up with our mates or heading to the football but instead [ ... ]
sports
The Five Key Moves Cavill Uses To Get In Supernatural Shape...
Netflix’s TV series adaptation of The Witcher proved to be one of the most popular shows to land [ ... ]
sports
Work Out Like A WWE Superstar With John Cena’s Five-Day Training...
He’s widely regarded as one of the greatest professional wrestlers of all-time, has nearly 15 [ ... ]
sports
Conquer Those New Year Resolutions With These Five Fantastic...
During the first quarter of 2020 fitness apps were downloaded a staggering 593million times. Factor [ ... ]
sports
Work Out Like Hollywood’s Hardest Worker, Mark Wahlberg, With...
Mark Wahlberg hits the big 5-0 this year, and in those five decades the man from Boston, Massachusetts [ ... ]
sports
Why The History Channel’s Arctic Edition Of Alone Is Unmissable...
There have been a plethora of crazy TV series in recent years, take The World’s Toughest Race  [ ... ]
sports
Cheeky Chappie Jimmy Bullard’s Fishing Pod Is A Remarkably Down...
Fishing is one the sports that has seemingly proven immune to COVID-19 restrictions. You’re (usually) [ ... ]
sports
The Women’s Six Nations, Eubank Jr And Trump Are The Weekend's...
We may all be stuck inside but sport is continuing for now, which means some things may have slipped [ ... ]