As the covers come over to protect the battered grass of Wimbledon for another 12 months, it's a time for reflection. Over the last two weeks we have been gifted with amazing highs and heartbreaking lows, but what a fortnight of tennis it has been.

Those highs and lows can all be summed up by one man: Nick Kyrgios. He is without a doubt the face of Wimbledon 2022 and even though he lost the men's final to seven-time champion Novak Djokovic, he gave us some sensational moments along the way.

His firecracker of a match against Stefanos Tsitsipas had everything. The Greek star took the first set via a tie-break before Kyrgios roared back to win in four sets, but it was the spicy encounters between the pair that caught the attention of everybody watching on.

Tsitsipas claimed the Aussie was ‘a bully’, leathered the ball at him on several occasions and hit the ball into the crowd while Kyrgios claimed his opponent should have been disqualified and pulled off several underarm serves. It was the very best and worst of the sport over a couple of hours, and we saw every side of this volatile talent.

Kyrgios made it to the final due to Rafael Nadal’s injury withdrawal, which has to go down as the biggest disappointment across the two weeks. The Spaniard was on top form and his semi-final clash with Kyrgios would have been one of the matches of the tournament so his withdrawal, which also brought an end to his hopes of a calendar grand slam, was a crying shame.

The Aussie might have lost the final but he still delivered a classic line to the umpire that is perhaps the quote of the tournament.  “The one in the dress. The one who looks as if she has had about 700 drinks, bro. She’s drunk out of her mind. That’s acceptable in a Wimbledon final?”

But it was Novak Djokovic who lifted the famous Wimbledon trophy for the fourth successive year to further establish himself as one of the all-time greats. Having been banned from the Aussie Open and beaten by Nadal in the French, this is likely to be his only slam of the year, given he is still banned from entering the US due to his vaccination status. 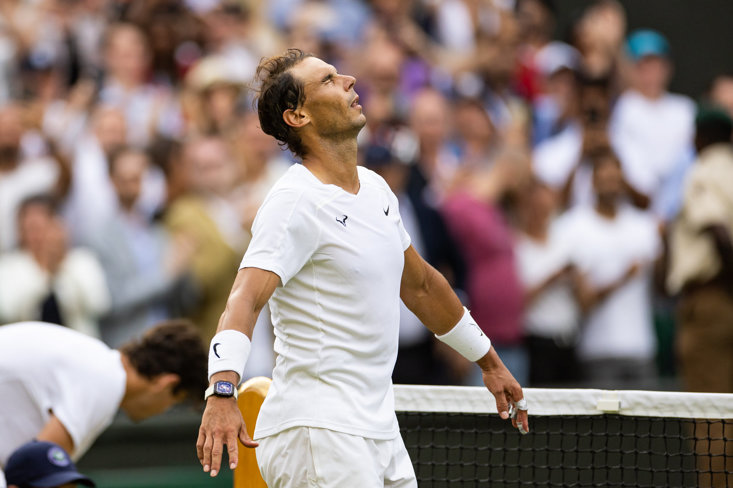 Nadal was forced to withdraw through injury

There were bright sparks for the Brits as well. Even though former champion Andy Murray and US Open winner Emma Raducanu both suffered early exits, Cameron Norrie carried the flag for the nation as he made it all the way to the semi-final, while Heather Watson, Katie Boulter and Liam Broady all put in decent showings. Alfie Hewitt was unfortunate to lose the men’s wheelchair final, but this was still a progressive tournament for British tennis, and proved there is now a depth in quality across the board.

Raducanu’s early exit was another disappointment, but the feel-good story of the women’s draw came in the form of Ons Jabeur. The Tunisian became the first Arab woman and the first African woman to make it to a grand slam final in the open era and her progression could provide inspiration to a whole new generation of tennis fans.

Germany's Tatjana Maria shone on her way to the semi-finals but eventual winner Elena Rybakina showed the character needed to get over the line. Even at one set down, she kept on battling and this title, as a 23-year-old, could spur her on to more future success. However, there was a tinge of controversy as the Russian-born athlete, who switched to playing for Kazakhstan in 2018 was allowed to play at all, while men’s number one Daniil Medvedev was banned.

The lack of ranking points meant that Djokovic dropped in the standings despite his win, yet nothing can take away from the history and prestige this competition brings. All the top players still wanted to play, new stars were discovered and the crowd loved every single minute. Some of them enjoyed it slightly too much.

Ready to do it all again in twelve months time?