Sports
News
To get you in the mood for Cena's return at SummerSlam, here are some of his greatest WWE moments
Joey Mills
19:02, 21 Aug 2021

John Cena takes to the ring on Saturday in his first pay-per-view main event for over three years, when he faces Roman Reigns for the WWE Universal Championship at SummerSlam. To get you in the mood for the return of ‘Big Match John’, here are some of his greatest WWE moments.

When Kurt Angle laid out an open challenge on the 27th June 2002 edition of SmackDown, viewers had no idea they were witnessing history. Debuting John Cena answered the call, and when the ‘Olympic Hero’ asked what the rookie brought to the table, the answer came loud and clear. “Ruthless Aggression.” One of the all-time greats, Angle led the newcomer through a thrilling match, and the star-making display was solidified when The Undertaker congratulated Cena on his performance backstage. 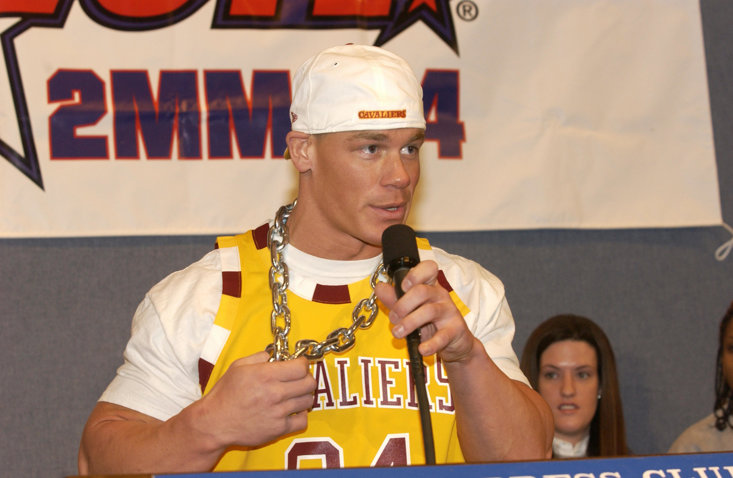 2006 saw perhaps Cena’s greatest feud, as he traded the WWE Championship with the ‘Rated R Superstar’ Edge in a series of intense matches. The finest of these was their Tables, Ladders and Chairs encounter at Unforgiven 2006. A high-octane stunt-show culminated when Cena gave Edge the Attitude Adjustment from the top of a 16-foot ladder.

No wrestler is more synonymous with WrestleMania than ‘The Heartbreak Kid’ Shawn Michaels, and Cena joined his pantheon of classic matches at the event in 2007. Closing the show for the second year running, the then-WWE Champion came into his own as a WrestleMania main eventer in front of an announced crowd of over 80,000 fans.

John Cena truly transitioned from greenhorn to seasoned performer when he adopted the ‘Doctor Of Thuganomics’ persona, an 8 Mile-inspired gimmick where he insulted his opponents with battle raps. When The Rock returned in 2011, he targeted the man many saw as his heir. Cena responded with a one-night return to his hip hop roots, with a stunning verse that insulted Rock’s movie roles such as Tooth Fairy, his catchphrases, his absence from WWE and even his choice to go by his birth name of Dwayne Johnson. When faced with one of the greatest talkers ever, Cena excelled. 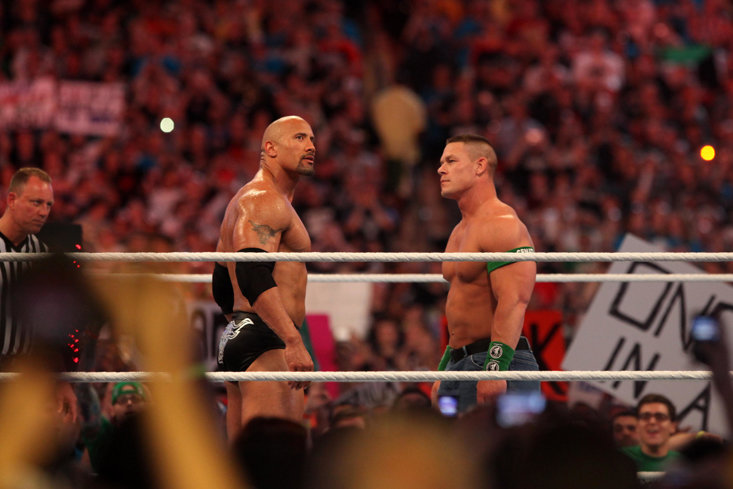 The Shape Of Punk To Come

John Cena’s Chicago clash with hometown hero CM Punk benefited from a rabid crowd, and unprecedented stakes. Punk would pin Cena to capture the WWE Championship, before leaving the company with the belt when his contract expired the next day. The extraordinary atmosphere and incredible action made for a true wrestling classic.

Brock Lesnar had walked out of WWE in 2004, attempting an NFL career before settling in UFC, where he reigned as Heavyweight Champion. He returned at Extreme Rules 2012, and what followed was one of the most violent matches of the era. Cena took a pounding from Lesnar, with fists, blood and ring steps all making their way into the menagerie of violence. Against the odds, John drilled Brock with a steel chain to score the unlikely win.

Tying With The Nature Boy

John Cena wrote his name into the record books when he defeated AJ Styles in the latest chapter of their incredible rivalry at the 2017 Royal Rumble. Joining Ric Flair on 16 recognised world title reigns, Cena seemed to put himself in the box-seat to claim the overall record. Four years later and due to reduced activity and a budding film career, the 17th title is yet to arrive. Cena will get the chance to finally overtake the ‘Nature Boy’ this weekend when he meets Reigns. 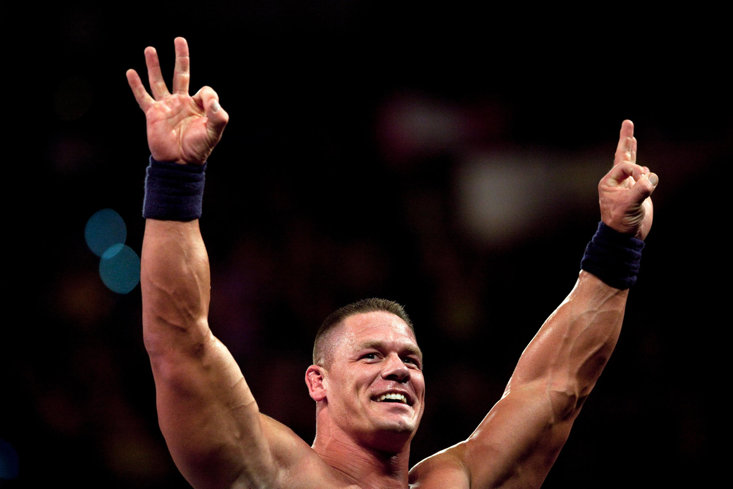 Welcome To The House Of Fun

The pandemic led to WWE making some daring creative choices at WrestleMania 36. The company pre-recorded John Cena’s clash with ‘The Fiend’ Bray Wyatt, presenting a bizarre and enthralling spectacle termed the “Firefly Fun House”. A riot of references to Cena’s past, and imagined futures, fans saw John in the colours of the NWO, in a pastiche of an ‘80s Hulk Hogan promo and interacting with a hand puppet dressed like a satanic Vince McMahon. The strangest entry on the list, but certainly one of the most memorable.

x
Suggested Searches:
Manchester United
Liverpool
Manchester City
Marcus Rashford
Premier League
More
sports
How Elite Athletes Like Ronaldo And LeBron Have Adapted Their...
Cristiano Ronaldo’s goal for Manchester United in their 2-1 loss to Young Boys last night showed [ ... ]
sports
Teenage Kicks: Raducanu Joins Elite Group Of Top British Sporting...
Emma Raducanu stunned the world with her incredible US Open final win in straight sets over Leylah Fernandez. [ ... ]
sports
Enter The Dragon: Bryan Danielson Shakes Off ‘Daniel Bryan’
Daniel Bryan is dead. Long live ‘American Dragon’ Bryan Danielson. Whatever you know him [ ... ]
sports
The Shape Of Punk To Come: AEW Return To Chicago For All Out
AEW returns to pay-per-view with All Out on Sunday night, broadcasting live from the Now Arena in Chicago, [ ... ]
sports
Rebuilding Ric Flair: How Vince McMahon And Triple H Saved 'The...
‘Nature Boy’ Ric Flair returned home on Sunday night, when he made his return to the National [ ... ]
sports
The Superhuman Superstars Inspiring A New Generation At The...
The Paralympics are well underway and some of the most inspirational humans the world has to offer are [ ... ]
sports
From Undisputed To A Little Bit Of The Bubbly, Chris Jericho's...
Wrestling legend Chris Jericho will put his career on the line when he faces MJF at AEW All Out on 5th [ ... ]
sports
From Fireworks In France To Disco Demolitions: The Ugliest Conclusions...
Last night we saw the match between OCG Nice and Marseille abandoned as a result of disgraceful behaviour [ ... ]
sports
Many Happy Returns - Becky Lynch And Brock Lesnar Shake SummerSlam
‘Comeback’ was the key word at WWE Summerslam on Saturday night as over 50,000 fans at Allegiant [ ... ]
sports
Sports vs Videogames: When Tyson, Zlatan and LeBron Raged Against...
After a drawn-out legal dispute, Manchester United will be renamed ‘Manchester UFC’ on the [ ... ]
sports
CM Punk Prepares To Return - Will He Drop Another ‘Pipe Bomb’?
While nothing is 100% sure in the world of pro wrestling, all credible indicators point to the fact [ ... ]
sports
WWE SummerSlam Brings Cena, Edge And More To Nevada
SummerSlam has traditionally been WWE’s second-biggest event of the year, below only WrestleMania [ ... ]
sports
Farewell Tokyo, Hello Paris! How Will Team GB Look At The 2024...
So the curtain has come down on Tokyo 2020 and although this was the ‘extended version’ [ ... ]
sports
Kenny's Keirin, Brown's Bronze & The Sportsman's Highlights...
The Tokyo 2020 Olympic Games might be over but they have left The Sportsman’s team with plenty [ ... ]
sports
Another Astonishing Olympics For Team GB - But Is This The Peak?
We didn’t know if it would even take place, but the sun has set on a Tokyo Olympics that has thrilled [ ... ]
sports
Day 14 Olympics Round-Up: Kenny Becomes First Female Brit To...
We are in the final straight of the spectacle that is Tokyo 2020 and while this great Olympics is drawing [ ... ]
sports
Day Eleven Olympics Round-Up: Thompson-Herah Wins Double-Double...
An astonishing day of Olympic action unfolded in the Japanese capital as there were more golds for Team [ ... ]
sports
Mixed Events Are Here To Stay After Team GB's Tokyo Olympics...
Tokyo 2020 has seen the introduction of some new encapsulating mixed events that could be the future [ ... ]
sports
Italy Continue To Defy The Odds As Perfect Summer Continues...
There could be no such thing as the perfect summer of sport, but if there is, Italy are experiencing [ ... ]
sports
Day Ten Olympics Round-Up: GB Win Eventing Gold As Simone Biles...
Day 10 of Tokyo 2020 had plenty to offer as Team GB claimed another gold to add to their impressive [ ... ]
sports
Day Eight Olympics Round-Up: Relay Gold For Team GB Despite...
Team GB enjoyed more success on day eight of Tokyo 2020 as further history has been made in these historic [ ... ]
sports
From Dina To Daley, Here's What's In Store For Week Two At Tokyo...
The first week of Tokyo 2020 has been full of excitement and has produced some great entertainment. [ ... ]
sports
Day Five Olympics Round-Up: Mallory Franklin Takes Silver In...
Day six of Tokyo 2020 brought more excitement and Great Britain managed to pick up a few more medals [ ... ]
sports
From Raging Bull To Rudy, Ten Of The Greatest Sports Biopics...
This week saw the trailer drop for King Richard, a brand new biopic of Richard Williams, father [ ... ]
sports
Day Five Olympics Round-Up: GB Relay Team Storm To Gold & Dujardin...
Tokyo 2020 continues to thrill, with Great Britain collecting more medals on Wednesday and some high-profile [ ... ]
sports
Simone Biles Should Be Applauded For Her Withdrawal, Says Mental...
Simone Biles’ decision to withdraw from the all-around gymnastics final has been applauded by [ ... ]
sports
Day Four Olympics Round-Up: More Medals For Team GB In Best...
Great Britain has never had such a successful start to an Olympic Games. As day four comes to a close, [ ... ]
sports
Tokyo Olympics Day Three Round-Up: Team GB Enjoy A Magic Monday
It was a thrilling Monday for Team GB as the squad brought home five medals, including three golds, [ ... ]
sports
From Child Prodigy To Champion, Tom Daley Succeeds In Quest...
It has taken four Olympic Games, but Tom Daley finally claimed his first gold medal alongside Matty [ ... ]
sports
Tokyo Olympics Day Two Round-Up: Team GB Get Medal Tally Up...
There was finally some medal success for the Brits, a match to forget for the USA’s men’s [ ... ]