Let’s take stock for a second. 2019 has delivered some blistering moments. Who can forget Jorge Masvidal’s demolition jobs of Darren Till and Nate Diaz, Daniel Cormier bowing out of the Octagon with Stipe Miocic collecting the Heavyweight belt, and Amanda Nunes showing everyone she’s the baddest woman on the planet.

But 2019 isn’t done yet, no sireee. In the early hours of Sunday morning the last main event of this year’s Ultimate Fighting Championship commences.

UFC 245 kicks off at 1am on BT Sport, with the stacked main card starting at 3am. And here’s what you can expect...

The event itself is headlined by one of the most intense rivalries the sport has seen in years, between Kamaru “Nigerian Nightmare” Usman, the current Welterweight champion, and Colby “Chaos” Covington, an NCAA Wrestling graduate.

Both fighters have wrestling-based games, both have held the belt, and both have identical records in the cage, fighting 16 times, winning 15 and losing only once.

But that’s where the similarities end. They come from very different backgrounds.

At just eight years old, Usman emigrated to the USA from Nigeria. He started wrestling in high school based in Texas where he compiled a 53-3 record. He stays away from the political sphere, unlike his opponent.

“Chaos” is a massive supporter of President Trump, showcasing his love for the POTUS on his Instagram and inviting Eric and Donald Trump Jr to his win over Robbie Lawler. He thrives off the so-called ‘haters’ and continues to excel in the cage. He’s the kind of bloke that walks out of a midnight screening of Star Wars: The Rise of Skywalker and tweets his 105,000 followers telling them who dies in the film. There’s always one.

Who wins? Very tough call this, both fighters are excellent wrestlers and it could simply be won in the clinch. It could go either way but Usman is the current champion for a reason and it seems like he might have the extra ability to pull out a fourth or fifth-round submission to get Covington to tap.

Holloway v Volkanovski - The Unstoppable Force vs the Immovable Object

The second main event of the night is Featherweight champion Max “Blessed” Holloway, facing Alexander “The Great” Volkanovski. The Australian Volkanovski might be a recent star but he’s beaten some pretty tough fighters to get to this title shot, including former champion Jose Aldo by unanimous decision and Chad Mendes via TKO. He also used to be a rugby player, something that’s definitely helped him as he switched to mixed martial arts.

Max Holloway on the other hand seems quite focussed on his future in the UFC, after losing the interim Lightweight title fight to Dustin Poirier earlier in the year.

We predict Volkanovski wins by decision. Max Holloway will last well in the stand-up but will get dominated on the ground by a more offensive opponent, who’s going to open him up with his powerful overhand right.

The third part of the intense trilogy is Brazilian Bantamweight & Featherweight champion Amanda 'The Lioness' Nunes facing up against Germaine 'The Iron Lady' de Randamie.

Nunes, coming off the back of nine consecutive victories against the likes of Ronda Rousey, Cris Cyborg and Holly Holm, will be looking to cement her fifth defence of the Bantamweight championship. 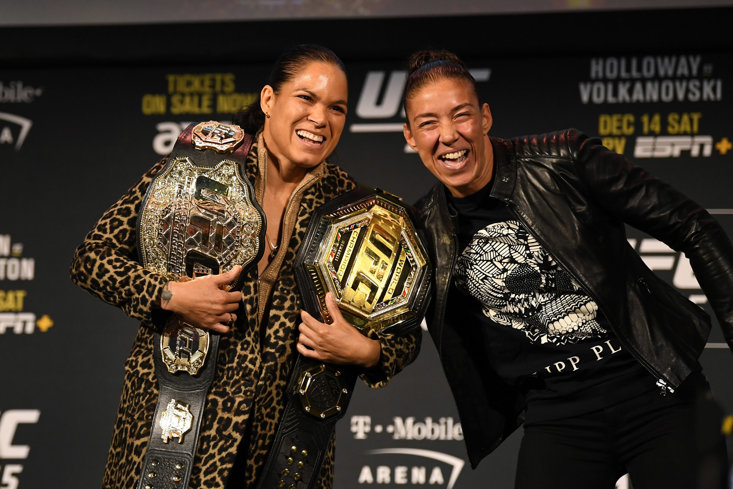 Speaking on the UFC’s official website, the president of the Ultimate Fighting Championship, Dana White said: “She’s the greatest female fighter of all time and she’s one of the greatest mixed martial artists to ever live.”

In the other corner, former psychiatric nurse and police officer in the Netherlands, Germaine de Randamie, has only lost three fights previously, one of them being a TKO by the current champion and her next opponent.

That’s no discredit to the 35-year-old though, she shares the record for the fastest knockout in the UFC Women’s Bantamweight division from when she TKO’d Aspen Ladd in just 16 seconds.

For this one, it’s tough to see Amanda Nunes losing a fight after the dominant performances she’s been churning out recently. De Randamie is an excellent fighter but the Brazilian will have the skills on the ground and on her feet to take the Dutchwoman out in one way or another. Round 1 TKO by Nunes.

x
Suggested Searches:
Tyson Fury
Manchester United
Marcus Rashford
Lewis Hamilton
F1
Air Jordan
More
mma
Gilbert Burns Is Back And Looking To End Kamaru Usman's Unbeaten...
The UFC’s efforts to ensure events remain watchable throughout the Covid-19 pandemic are set to [ ... ]
mma
The Diet Plan McGregor Is Using To Ensure He’s Fighting Fit...
Conor McGregor returns to the Octagon this weekend when he takes on Dustin Poirier for the second time [ ... ]
mma
At £330,000, Ronda Rousey Is The Highest Earning MMA Fighter...
It’s been a long time coming and the only person more prepared than the fans is the man himself [ ... ]
mma
Talented, Tough And Charitable, Who Is Conor’s UFC 257 Opponent...
All eyes will be on Conor McGregor this weekend as he makes his return to the Octagon after another [ ... ]
mma
Michael Bisping’s Believe You Me Is The Perfect Pod To Satisfy...
With nearly 300 episodes to currently demolish, this is the podcast to satisfy your MMA munchies.  [ ... ]
mma
The UFC Needs Paige VanZant's Instagram Followers More Than...
It was over almost before it began. Eighteen months of waiting culminated in a dominant Amanda Ribas [ ... ]
mma
Sanitised Violence: When Cage Warriors Went Behind Closed Doors
Just before UK lockdown began, top European MMA promotion Cage Warriors took place in a hauntingly deserted [ ... ]
mma
''Best Shape I've Ever Seen Him'' - Conor McGregor Bringing...
The wait is almost over as Conor McGregor makes the final preparations for his return to the Octagon [ ... ]
mma
Hungry And Focused, It's The New Improved Conor McGregor
Conor McGregor’s striking coach, Owen Roddy, insists his fighter “has that hunger again” [ ... ]
mma
''Focused'' Conor McGregor Announces His Octagon Return In 2020
Conor McGregor has come out of MMA retirement and announced his return to UFC at the start of next year. [ ... ]
mma
From Flanker To Fighter: James Haskell Talks To TheSportsman...
Former England rugby star James Haskell announced last week that he'll be swapping his scrum cap [ ... ]
mma
His Three Most Notorious Moments Inside The Octagon As Conor...
The former UFC featherweight and lightweight champion Conor McGregor has announced his retirement [ ... ]
mma
Tenshin Nasukawa Unleashes Amazing Capoeira Kick To Bounce Back...
The defeat to Floyd Mayweather in a farcical exhibition big-money boxing match on the last New [ ... ]
mma
#Bellator216: Michael Page Outpoints Paul Daley In Disappointing...
Michael ‘Venom’ Page outpointed long standing rival Paul Daley at the Mohegan Sun Arena [ ... ]
mma
#Bellator216: MVP And Daley Set For All-British Brawl In Connecticut
The biggest domestic UK MMA fight of all time goes down this Saturday evening… in Connecticut, [ ... ]
mma
Aaron Chalmers Suffers Shock Defeat In Hometown Bellator Newcastle
Bellator kicked off their European Series in Newcastle with a bang, with an incredible twelve finishes [ ... ]
mma
Aaron Chalmers Aims To Please As Bellator Heads To Newcastle
Aaron Chalmers bids to move to a perfect 5-0 record as a mixed martial artist in his hometown, as he [ ... ]
mma
Conor McGregor 'Clone' - German MMA Fighter Emulates His Hero...
If you are going to model yourself on UFC Legend Conor McGregor then you better be able to deliver the [ ... ]
mma
Conor Mcgregor And Khabib Nurmagomedov Slapped With Hefty Bans...
Conor Mcgregor And Khabib Nurmagomedov have both been banned for their parts in the mass brawl that [ ... ]
mma
Tenshin Nasukawa Responds To Conor McGregor Calling Him Out
The Japanese martial artist Tenshin Nasukawa has seemingly not allowed his confidence to be knocked [ ... ]
mma
Celtic Gladiator 22: Brendan Loughnane And Kane Mousah Headline...
European mixed martial arts show Celtic Gladiator return to Manchester on Friday night for the second [ ... ]
mma
Horrendous Scenes As MMA Fighter Dislocates His Knee Whilst...
Not what you want to see on a Sunday morning but here we go anyway. As we know, MMA is probably the [ ... ]
mma
Yair Rodriguez Stuns Chan Sung Jung With Last Second Knockout...
Yair Rodriguez produced a sickening elbow to the face of Chan Sung Jung in the last second of their [ ... ]
mma
Conor McGregor Inspires Dallas Cowboys To Victory And Claims...
Conor McGregor bounced back from his defeat to Khabib Nurmagomedov by watching the Dallas Cowboys beat [ ... ]
mma
Conor McGregor's Top 5 Knockouts
The return of Conor McGregor to the octagon after an extended… sabbatical will redraw the collective [ ... ]
mma
Korean Taekwondo Team Dazzle Audience With Action Packed Display
It’s over ladies and gentleman. If you’re thinking about taking up Taekwondo, or looking [ ... ]
mma
Ultimate Fighter 27 Finale Is Perfect Prelude To UFC 226!
The Ultimate Fighter Season 27 draws to a close as the perfect warm-up act for the hotly anticipated [ ... ]
mma
Aaron Chalmers' First Bellator Bout Sees The Ex-Geordie Shore...
On Friday night, MMA fighter Aaron Chalmers sensationally won his bout with Ash Griffiths by technical [ ... ]
mma
UFC Atlantic City: Kevin Lee Misses Weight, Main Event Still...
The octagon returns to Atlantic City, New Jersey for the first time in nearly four years with the promotion [ ... ]
mma
Jacare Meets Brunson In Main Event At UFC Charlotte
The octagon returns to Charlotte, North Carolina after almost an eight-year hiatus with a twelve-bout [ ... ]