Boxing
News
The Gypsy King has hired the best ahead of his rematch with WBC champion Deontay Wilder
Elliott Bretland
13:00, 18 Feb 2020

When it comes to Saturday night’s big fight, it will just be Tyson Fury in the ring. The pressure, the adrenalin, the expectation; it will all be on him when he takes on Deontay Wilder in Las Vegas. However, in the build-up, the ‘Gypsy King’ has had a team of experts to depend on as he gears up for the bout billed as ‘Unfinished Business’.

Here, The Sportsman profiles Team Fury, those closest to him for the MGM Grand match-up...

Fury has employed the legendary Jacob ‘Stitch’ Duran to prevent any mid-fight struggles after he suffered a cut eye last time out. The American is the expert cut-man in the industry and, as 31-year-old Fury looks for any advantage to get the better of Wilder, he has gone all out to recruit the best.

Last September, the British heavyweight overcame a nasty gash to beat Otto Wallin of Sweden. There was real concern for Fury against Wallin, with some stating Fury was given a hefty dose of fortune to hear the final bell, let alone emerge victoriously.

“I think any other country in the world, they would have stopped the fight."

Duran’s appointment should allay any fears for a repeat. Explaining his role to Sky Sports in 2017, he explained: "A doctor stops a fight when a fighter is at a disadvantage. My job, first and foremost, is to eliminate any disadvantage. My job is to give them one more round.

"I focus on the cut and look into a fighter's eyes - if I notice he is not capable, then I make recommendations [to stop] to the coach. You have to make split-second decisions.

"My job is not to give instructions but usually, when I say something, guys know there's a lot of truth to it."

Working with some bonafide boxing greats, including Andre Ward and the Klitschko brothers, Duran has even appeared in three Rocky Balboa films. Fans of YouTube might recognise his work in Logan Paul's corner during his rematch with fellow social media star KSI in November 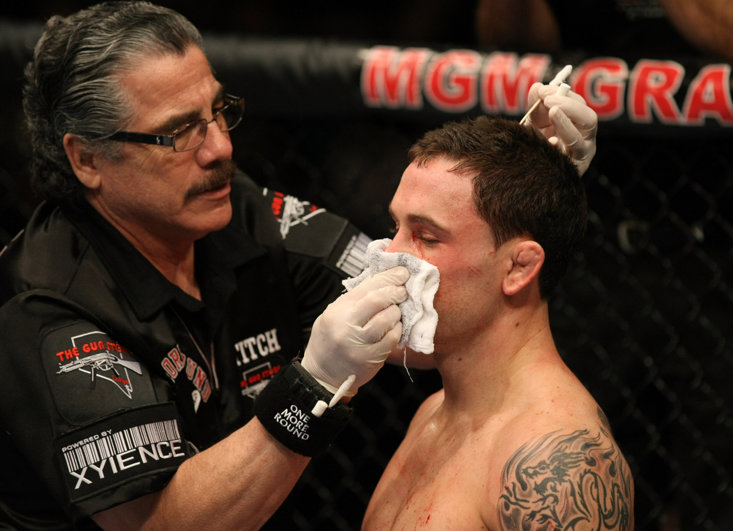 Jacob 'Stitch' Duran gets to work at a UFC event

Curry, red meat, salmon. Six meals a day. That’s been Fury’s culinary itinerary for this fight. George Lockhart is his personal nutritionist and chef and recently told Sky Sports News: “I cook a lot of curries for him.

“He usually has something with turmeric. He has one curry per day. I introduce red meat every other day.

“Red meat is nutritionally dense but takes a long time to break down.

“Every day he has at least one salmon for the Omega-3s. I want everything to be anti-inflammatory.'

Fury is looking trim and has vowed to weigh in at 270 pounds for the bout and Lockhart has been tasked with ensuring his intake is spot on.

“Each day I try to give Tyson a diverse group of food,” he continued. “He has a different type of meat with every meal. From what I've heard in other camps he ate chicken and rice. Now we make crazy meals.

Fury’s decision to part with trainer Ben Davison raised eyebrows but the fighter is keen to take things up a level for the rematch. Working with SugarHill Steward, the new man in the ring is known as a knockout specialist and his knowledge will be vital when coming up against the dangerous Wilder.

“I did good in the first fight with Wilder and believe I won it despite the two knock-downs. People said if it's not broke don't fix it but I don't want this second one to end up with the judges.” Fury told the Daily Mail.

“SugarHill's not been asked to change anything, only to add other elements. To get the knock-out, and I have had recurring dreams of doing that in the second round, it's not more power I need as some are saying but better balance.

Fury is bigger and more ready than before, and employing the nephew of renowned trainer Emmanuel Steward could prove decisive.

The Sportsman
@TheSportsman
"We call it the Kronk style get a knockout, go for the knockout"
@Tyson_Fury's new trainer, Sugar Hill Steward, spoke about his new tactics.
📹 @BTSportBoxing
#WilderFury2

Of course, Fury’s boxing ability is the determining factor in whether he beats Wilder on Saturday but, as well, it’s all about confidence. After well-publicised mental health struggles, the Manchester-born is fighter is in a good place and is really looking the part inside and out of the ring.

For such a colossal man, standing at 6’9”, kitting Fury out is a big job.

“Right now he’s the most trimmed and lightest he’s been in regards to our measurements and fittings but obviously it was challenging.”

“I look at our garments and see them to provide him with two to five per cent more confidence.

“There may have been a time when he didn’t feel confident within himself because of the nature of his mental health battles. Now, he’s the best he’s ever looked and the garments give him more confidence going into the fight."

“We’re very bold with our colours, our prints, playful in our designs. As his journey developed in terms of crossing over to the States, the Showbiz element, making a statement, he very much wanted to up the ante, that was his direction with regards to stepping up the designs and looking to steal the show with every element, in and out of the ring.

“That's what I love about working with Tyson, he makes it fun but at the same time, we’re very serious about our designs and craft and he’s very serious about what he does in the ring so we combine the quality. That’s where it works as a partnership.”