Fulham were cruelly denied an historic victory and a massive three points as Arsenal scored an equaliser in the 97th minute to claim a dramatic 1-1 draw on Sunday.

The Cottagers will be heartbroken having led since Josh Maja’s penalty on the hour mark but were denied late on as substitute striker Eddie Nketiah scored deep into injury-time and are six points from safety with only five games of their season remaining.

The odds were already firmly stacked against the west London club even when they were ahead as they chased Burnley, Newcastle and Brighton. Any of the three will do but Fulham’s Emirates blow will be a massive setback.

The Gunners actually found the net in the first half but the Cottagers were saved by a toe after Dani Ceballos scored but Bukayo Saka was declared offside by VAR. It was so tight, and was adjudged by little more than an inch of the boot but these are the calls being made this season and the fine, fine margins settling matches. 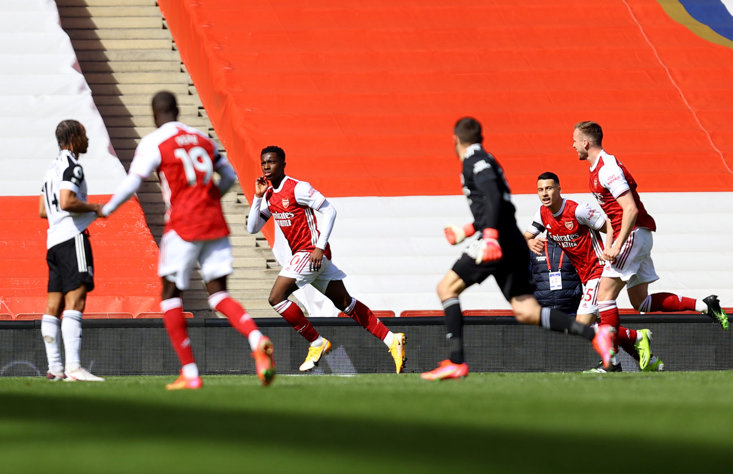 Heading into the break, the game remained goalless as both sides struggled to find a spark and the first 45 minutes were largely forgettable but for that first half call. The match came to life in the second half though as Fulham took the lead on the hour mark with their first effort of the encounter.

Arsenal defender Gabriel appeared to catch midfielder Mario Lemina in the area and the visitors were handed a spot-kick. As Josh Maja stepped up, manager Scott Parker was crouched down, knowing how big this kick was. The striker lashed the penalty high into the roof of the net and Fulham led.

The Gunners have stuttered plenty of times this campaign but they kept going. They kept the ball and probed, looking for a way back in. Though they had belief, the goal didn’t look like it wasn’t coming.

With twenty minutes to go, Arsenal then turned up the pressure but still couldn’t get a proper grip on proceedings. Gabriel Martinelli did excellently to nip in past Alphonse Areola and turned to send in a cross to the back post for substitute Nicolas Pepe but the Frenchman’s effort was somehow turned away off the line by the Fulham goalkeeper and booted clear.

While the Premier League campaign has been a struggle, Arsenal have reached the semi-finals of the Europa League and winning the tournament would see them play in the Champions League next season. However, that challenge would be more difficult without Alexandre Lacazette who was forced off, having seemingly hurt his hamstring.

While it is a worry, it was his replacement who rescued Arsenal here. With only seconds of seven added minutes remaining, the Gunners forced a corner. Mat Ryan sauntered up for it, looking to make any impact at all. And he did. The Australian keeper got his head on the inswinging set-piece which landed at the feet of Ceballos who rifled the ball goalwards. The ball made it’s way through a number of bodies before Areola got down to palm it away but it only went as far as the unmarked Nketiah who tapped in at the back post.

Parker’s face said it all and it was a crushing end to a game in which Fulham had battled hard to keep hold of their slender advantage. Then it was gone and the game was over. The Cottagers are six points behind Burnley, who face Manchester United at Old Trafford, and it will now take a major swing for them to survive.