It’s heavyweight heaven this weekend in Las Vegas as not only will fight fans be treated to Tyson Fury and Deontay Wilder’s third blockbuster showdown, the main event’s undercard will also include several mouthwatering match-ups from boxing’s marquee division.

Highlighting the Fury-Wilder III undercard is a trio of heavyweight bouts. Robert Helenius and Adam Kownacki take part in an intriguing rematch, Frank Sanchez puts his undefeated record on the line against Efe Ajagba, while the highly-touted Jared Anderson takes on Vladimir Tereshkin over eight rounds. Here’s everything you need to know about a hard-hitting night of action.

A little over a year and a half since they first did battle in New York, ‘The Nordic Nightmare’ and ‘Babyface’ are set to go at it once again. Finland’s Robert Helenius, 30-3-0, won that first encounter by a fourth round TKO but Polish-born Brooklyn native Adam Kownacki, 20-1-0,  had looked well ahead in the bout before the devastating stoppage, setting up an intriguing encounter in Sin City this weekend.

“I got a little reckless and I got caught cold,” Kownacki explained to PBC. “When you walk in and you get timed with a good shot, it stings. The 1-2 buzzed me on the knockdown and messed up my equilibrium. But you know I’m from Brooklyn and I have to get mine in the rematch. It was a lesson learned and I’ll be back.” 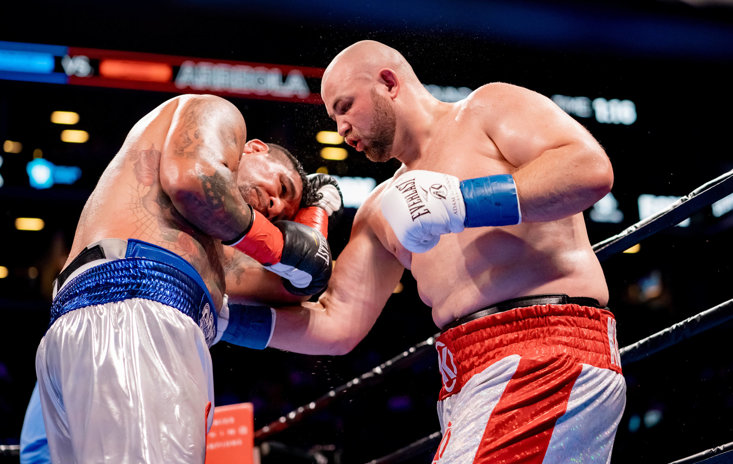 Someone’s ‘0’ will have to go in Vegas this weekend when undefeated heavyweights Frank Sanchez and Efe Ajagba come to blows in Nevada. ‘ The Cuban Flash’ Sanchez, who trains alongside Mexican pound-for-pound superstar Canelo, is looking for a career-best win against Ajagba but the Texas-based Nigerian is no pushover, winning 12 of his 15 professional scraps so far by way of knockout.

“Everybody knows he’s got that really good straight right,” Sanchez told Boxing Scene. “That’s his best weapon. He’s managed to land that right hand on a lot of fighters, but none of those fighters have the kind of experience that I have. And I have all the other tools to win.”

Ohio’s Jared Anderson is widely considered the future of heavyweight boxing Stateside and with his speed, athleticism and the fact he’s won all nine of his fights so far inside the distance, you can see why fight fans across the pond are getting quite giddy about Big Baby’s prospects.

This weekend the 21-year-old, who has sparred with Tyson Fury, faces his sternest test yet when he takes on Vladimir Tereshkin, a bona fide veteran of the sport who’s been in the game for more than 14 years now. The undefeated Russian hasn’t fought in nearly two years though, so Anderson and his handlers will be feeling pretty confident in making it ten wins from ten on Saturday night.

x
Suggested Searches:
Manchester United
Liverpool
Manchester City
Marcus Rashford
Premier League
More
boxing
Weekend's Boxing Provides A Fight Of The Year And Upset Of The...
An Upset of the Year contender, a Fight of the Year contender and a big night in Newcastle for British [ ... ]
boxing
On This Day In 1987: Tyson Brings The 15-Round Era To A Brutal...
On this day in 1987, boxing changed forever, as the last ever 15-round world heavyweight title fight [ ... ]
boxing
Brawl On The Tyne: Fury, Marshall And Chris Eubank Jr Descend...
Unbeaten Savannah Marshall makes the second defence of her WBO middleweight championship this Saturday [ ... ]
boxing
Mixed Week For The Eubanks: Five Boxing Stories You Might Have...
Boxing never sleeps, and with Fury-Wilder III in the rearview, attention has turned to exciting fights [ ... ]
boxing
Haye At 41: The World Title Wins That Defined ‘The Hayemaker’
Former two-weight world champion David Haye turns 41 today. ‘The Hayemaker’ is unfairly [ ... ]
boxing
''You Big, Stiff Idiot!'': The Wit And Wisdom Of Tyson Fury
Not content with being the most able heavyweight fighter on the planet, Tyson Fury is also a supreme [ ... ]
boxing
The King’s Gambit: Who Should Tyson Fury Fight Next?
‘The Gypsy King’ has the world at his feet after solidifying his claim to the throne with [ ... ]
boxing
Retirement Or Fight His Way Back: What Happens Now To Deontay...
Deontay Wilder’s stock amongst the boxing community managed to both rise and fall on a damaging [ ... ]
boxing
Tyson Fury Retains Heavyweight Titles In Incredible Trilogy...
The first fight was a resurrection. The second was a demolition. Tonight, Tyson Fury’s 11th-round [ ... ]
boxing
LIVE Tyson Fury v Deontay Wilder 3
Morning all! What are you doing up at this time? It's Tyson Fury v Deontay Wilder. Again! The WBC [ ... ]
boxing
Merseyside Derby: Experienced Smith Awaits For Hungry Fowler
Liam Smith takes on Anthony Fowler this Saturday in a battle for Liverpool supremacy. The former world [ ... ]
boxing
Whyte Lined Up For Fury/Wilder Winner, Five Boxing Stories You...
Ahead of a blockbuster weekend in boxing in the ring, it’s been a pretty busy week out of it. [ ... ]
boxing
The Man Who Beat The Man: Tyson Fury On The Lineal Championship
When Tyson Fury walks to the ring to face Deontay Wilder on Saturday night, he will have two belts in [ ... ]
boxing
“I Look At Deontay Wilder Like He’s Stupid” - The Tyson Fury...
“Boxing is not rocket science. It’s me going in there, punching a man's face in. That's [ ... ]
boxing
Happy Birthday, Micky Ward: Remembering The Gatti War That Launched...
The word warrior is thrown around so readily in boxing, it has lost some of its impact. While every [ ... ]
boxing
Liam Smith vs Anthony Fowler: Everything You Need To Know
There’s a monster match-up on Merseyside this weekend when Liam Smith and Anthony Fowler go head-to-head [ ... ]
boxing
On This Day In 1998: Floyd Mayweather Wins First Ever World...
“We believe in our heart of hearts that Floyd Mayweather is the successor in a line that starts [ ... ]
boxing
Undercard? When? How To Watch? Everything You Need To Know About...
Tyson Fury and Deontay Wilder go head-to head for a third time next weekend, with The Gypsy King’s [ ... ]
boxing
UK First Choice For AJ Vs Usyk Rematch, Five Boxing Stories...
There’s news on where Anthony Joshua’s rematch with Oleksandr Usyk could land, a modern [ ... ]
boxing
Rebuild And Reclaim: Why Anthony Joshua Needs A New Trainer
Anthony Joshua looked bereft of ideas as Oleksandr Usyk boxed, moved and pounded his way to a unanimous [ ... ]
boxing
My Name Is Prince: 26 Years Since Naseem Hamed Won His First...
26 years ago today, a Prince was crowned king. ‘Prince’ Naseem Hamed stopped Wales’ [ ... ]
boxing
Eubank Statement: Junior Can Be The Face Of Sky Sports Boxing
Chris Eubank Jr takes to the ring this weekend as the new crown jewel of Sky Sports’ boxing coverage. [ ... ]
boxing
Keep Moving Forward: How ‘AJ’ Can Learn From Lennox The Avenger
Anthony Joshua, the dethroned three-belt king of the heavyweight division, sat stoically in the post-fight [ ... ]
boxing
Oleksandr Usyk Puts In Boxing Clinic Against AJ To Take Heavyweight...
You’d be forgiven if you’re starting to grow a little weary of hearing ‘Sweet Caroline’ [ ... ]
boxing
Okolie Cruises To Victory In First World Title Defence On AJ...
The first defence of Lawrence Okolie’s WBO cruiserweight crown ended swiftly on the undercard [ ... ]
boxing
The Rebuild Begins For Callum Smith As He Steps Up To Light...
Callum Smith was the best super middleweight in the world. The Liverpool fighter was the latest outstanding [ ... ]
boxing
Anthony Joshua Weighs In 19lbs Heavier Than Usyk Ahead Of Heavyweight...
Anthony Joshua has weighed in at 240lbs ahead of his heavyweight showdown with Oleksandr Usyk this weekend, [ ... ]
boxing
Okolie Is The Latest In A Proud Line Of British Cruiserweight...
Anthony Joshua will not be the only British world champion stepping into the ring at the Tottenham Hotspur [ ... ]
boxing
Anthony Joshua vs Oleksandr Usyk Is Fight Of The Year, Says...
Ahead of Oleksandr Usyk’s heavyweight showdown with Anthony Joshua at the Tottenham Hotspur Stadium, [ ... ]
boxing
From Mike Tyson To Mr. Dream, How Punch-Out!! Defined Boxing...
Only 55 men truly know what it is like to face ‘Iron’ Mike Tyson. But a generation of gamers [ ... ]