Ask any boxing fan which heavyweight fight they would cherish above all others and you’d get the same answer. Tyson Fury vs Oleksandr Usyk for the undisputed heavyweight champion. The two clear best in the world, both undefeated, to crown the first ever four-belt undisputed heavyweight king in history. It’s a bout that works on every level. So of course it’s not happening.

But both men do have other intriguing options in a deep division. For Usyk, a fight with Deontay Wilder would be fascinating. Fury against Anthony Joshua would break box office records in the UK. Either man against the likes of Joe Joyce or Andy Ruiz Jr would be exciting. So, once again, none of these fights are happening.

Instead we are on a dull path that feels very 2022. This year has seen drugs scandals, judging controversies and negotiations subject to more stalls than a Christmas Market. There has been a shining light in the form of massive strides made in women’s boxing, but the men’s game has stagnated. Now the heavyweight division looks set to carry that rot into 2023 with a series of uninspiring fights on the docket.

Fury’s needless trilogy fight with Derek Chisora has been covered in depth on these pages. The short version is that ‘The Gypsy King’ has already beaten ‘War’ comfortably on two occasions, while Chisora has a 1-3 record in his last four fights. Even by the often basement-low standards of heavyweight boxing, it’s an odious piece of matchmaking.

What could follow is equally uninspiring. One of the few genuinely good heavyweight fights on the schedule is Wilder vs Ruiz Jr. Two former heavyweight champions squaring off while they both still have much to offer is a nice change from the often one-sided bouts that populate many cards. However, the fight has been awarded status as a WBC title eliminator to determine Fury’s next challenger. This presents problems. 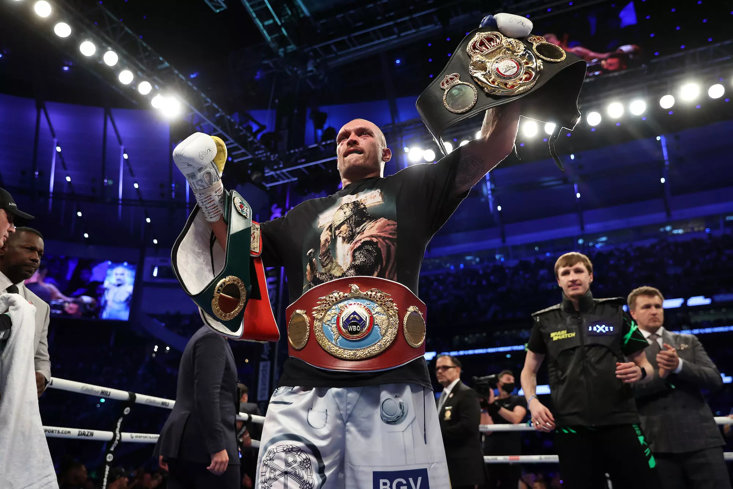 Wilder will head into the match as a betting favourite. If he does what he’s expected to do, this sets us on the path to Fury/Wilder 4. While nobody can deny the first three were absorbing clashes, we have seen enough of this series. For a start, Wilder didn’t win any of their three meetings. Secondly, Fury has knocked out Wilder twice in consecutive fights. A win over Ruiz for ‘The Bronze Bomber’ could see Fury taking on yet another rematch that benefits no one where the result is a foregone conclusion.

Solace cannot be found on the other side of the heavyweight fence. WBA/WBO/IBF/The Ring champion Usyk has been ordered to face Filip Hrgovic. The Croatian has been named the IBF’s mandatory challenger after winning an eliminator with Zhang Zhilei. His lethargic display in that fight means nobody is relishing seeing Hrgovic take his shot. Particularly given the wealth of other options available to Usyk. At the age of 35, he doesn’t have an abundance of fights left. Every single one counts and Hrgovic feels like a waste of his supernatural talents.

The only solution to this mess is to pour the alphabet soup down the drain. “Undisputed” is a fine marketing tag, but everyone knows who the two legitimate heavyweight champions are anyway. Fury and Usyk would be best served ditching their WBC and IBF belts if that’s what it takes and fighting each other regardless. It is perhaps the most attractive fight that can be made in boxing today. The winner can even go on a mission to hoover up the fractured pieces of the crown. But there is nobody outside of the offices of a sanctioning body that genuinely thinks Fury vs Wilder 4 and Usyk vs Hrgovic are better than Fury vs Usyk. If the WBC and IBF won’t budge then simply discard them for the good of boxing.

x
Suggested Searches:
The Sportsman
Manchester United
Liverpool
Manchester City
Premier League
More
boxing
Oleksandr Usyk Enters Ring After Tyson Fury Batters Derek Chisora
Tyson Fury retained his WBC heavyweight title with a controlled and dominating display over fellow [ ... ]
boxing
Fit For A Gypsy King: The Greatest Performances Of Tyson Fury
Look alive you big dossers, 'The Gypsy King' is back. Tyson Fury defends his WBC championship [ ... ]
boxing
Del Boy's Half-Dozen: The Greatest Victories Of Derek Chisora
Despite being perhaps the most entertaining British heavyweight of this generation, Derek Chisora’s [ ... ]
boxing
Oleksandr Usyk Promoter Targeting Undisputed Clash With Tyson...
An undisputed heavyweight title fight between Tyson Fury and Oleksandr Usyk could happen in early [ ... ]
boxing
Tyson Fury On Retirement: I’m Not Built For A Normal Life
Tyson Fury returns to the ring this weekend when he puts his WBC heavyweight world title on the line [ ... ]
boxing
Mike Tyson, Floyd Patterson And Boxing's Youngest Heavyweight...
On this day in 1956, Floyd Patterson stopped the great Archie Moore in five rounds to become the heavyweight [ ... ]
boxing
Everything You Need To Know About Estrada Vs 'Chocolatito' III
Not all trilogies are created equal. But a rivalry poised at one win apiece, with each previous meeting [ ... ]
boxing
On This Day In 2015: Tyson Fury Ends The Wladimir Klitschko...
Tyson Fury walks into Tottenham Hotspur Stadium this Saturday as a proven commodity. As he makes his [ ... ]
boxing
What Does Dillian Whyte Have Left? Controversial Win Leaves...
Whatever you thought of the decision, something wasn’t quite right about Dillian Whyte’s [ ... ]
boxing
Tyson Fury vs Derek Chisora III: Everything You Need To Know...
Tyson Fury puts his WBC heavyweight title on the line this weekend when he meets Derek Chisora in the [ ... ]
boxing
Gorman Vs Wardley Is A Throwback Fight Worthy Of The British...
On Saturday night, Fabio Wardley and Nathan Gorman will honour one of the great British boxing traditions. [ ... ]
boxing
Five Blows From The Body Snatcher: Dillian Whyte's Greatest...
Dillian Whyte will be looking to bounce back to winning ways this weekend when he takes on undefeated [ ... ]
boxing
Carl Froch Vs George Groves And Boxing's Great British Grudge...
Nine years ago today, Carl Froch and George Groves collided at the Manchester Arena, waging the first [ ... ]
boxing
Dalton Smith: 'Get A Couple Of Million And I'll Smack A YouTuber!'
Dalton Smith is a star on the rise. The Sheffield super lightweight has just made the first defence [ ... ]
boxing
Zach Parker Vs John Ryder: Everything You Need To Know
The WBO interim super-middleweight title is on the line at the O2 Arena this weekend in a fascinating [ ... ]
boxing
Dillian Whyte Vs Jermaine Franklin: Everything You Need To Know...
Heavyweight contender Dillian Whyte will be looking to bounce back to winning ways this weekend when [ ... ]
boxing
Gervonta 'Tank' Davis And Ryan Garcia Agree To Mouthwatering...
WBA ‘regular’ lightweight champion Gervonta Davis has agreed a fight with unbeaten contender [ ... ]
boxing
The Weekend Boxing Preview: European Titles, Unbeaten Superstars...
After a star-studded weekend where old stagers Ricky Hatton and Floyd Mayweather took part in exhibitions, [ ... ]
boxing
Martin Scorsese At 80: Celebrating Raging Bull, The Iconic 'Anti-Rocky'
“And though I'm no Olivier, if he fought Sugar Ray he would say that the thing ain't the [ ... ]
boxing
Why Dmitry Bivol Should Make 'Canelo' Come Back To 175 Pounds...
Saul ‘Canelo’ Alvarez has targeted a May return to the ring, after having surgery on his [ ... ]
boxing
The Panel: Should Women's Boxing Move To Three-Minute Rounds?
Welcome to The Panel, where we speak to a group of star names from across the fight game about the big [ ... ]
boxing
A Tale Of Two Exhibitions: Ricky Hatton And Floyd Mayweather...
On 8th December 2007, Floyd Mayweather defeated Ricky Hatton in Las Vegas, with the WBC and The Ring [ ... ]
boxing
Tommy Fury vs Paul Bamba Cancelled: Is Fury Unprofessional,...
Tommy Fury’s stock has never been lower. This weekend, when due to fight Paul Bamba, he weighed [ ... ]
boxing
Redemption Day: Natasha Jonas Clinches The Treble Against Marie-Eve...
A year ago, Natasha Jonas’ two most recent fights were a pair of failed attempts to win world [ ... ]
boxing
Chasing Gold: Conner Tudsbury Determined To Become A Mancunian...
There was something of a media circus the day Moss Side Fire Station Boxing Club opened its doors in [ ... ]
boxing
Haney-Lomachenko, Stevenson-Cruz And More Ordered At WBC Convention
The World Boxing Council hosted their 60th annual convention, in which they laid out plans and policy [ ... ]
boxing
'You Want Homer To Fight Tatum?!': 26 Years Of 'The Homer They...
It was a heavyweight title fight like no other. Watched by 9.7 million viewers on its initial airing [ ... ]
boxing
Back From The Brink: Natasha Jonas Has Gone From Nearly Girl...
A year ago, Natasha Jonas had failed to win her last two bouts. The decorated amateur had seemed nailed [ ... ]
boxing
This Is Hitman Heritage: The Very Best Of Ricky 'The Hitman'...
Ricky Hatton returns to the ring this Saturday in an exhibition bout against legendary three-weight [ ... ]
boxing
Ricky Hatton vs Marco Antonio Barrera: Everything You Need To...
British boxing legend Ricky Hatton returns to the ring this weekend for the first time in nearly a decade [ ... ]