Football
News
Gabriel Batistuta Would Have Been A Premier League Success, Even At Ipswich Town
Adam Hurrey
14:35, 07 Jun 2017

Such has been the Premier League’s titanic self-regard as the unquantifiable Best League in the World™, it has always taken mild offence at any world-class player who - for whatever reason - opted to remain the relative comfort and familiarity of Spain or Italy.

But, even as its brand has hit the stratosphere, there remains a sense of awe when an elite player finally gives English football a try. Of all the players repeatedly linked with a Premier League move, Gabriel Batistuta represents one of the most compelling what-if scenarios.

Before his move to Serie A in 1991 finally unlocked Batistuta’s goalscoring power, he’d had an unsettled start in Argentina. 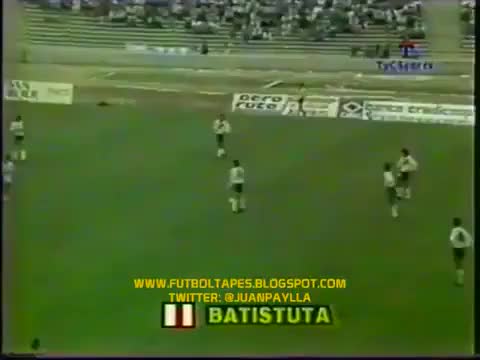 A season each at Newell’s Old Boys, River Plate and Boca Juniors yielded increasing returns, despite some difficult relationships with his managers, but he’d done enough to catch the eye for his country and earn the crucial gateway move to Europe.

Fiorentina may, at that point, have settled for being a highly profitable stepping-stone for Batistuta’s ambitions - they surely can’t have anticipated that he would stay for nine seasons and more than 200 goals. 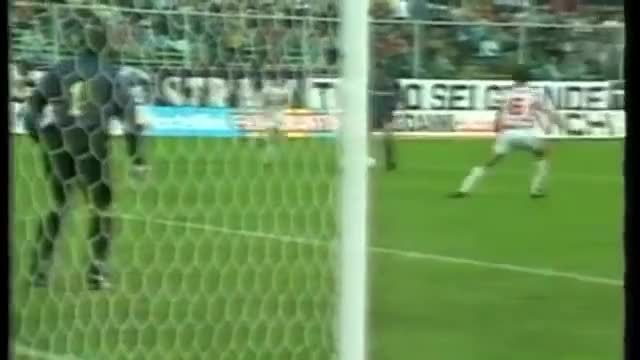 His promising first two seasons in Italy - where he established himself as a second-tier goalscorer behind the likes of Marco van Basten and Roberto Baggio - ended with the blow of relegation in 1993. Rather than seek a move that kept his career momentum going, Batistuta helped the Viola back up at the first time of asking. By the end of Argentina’s tumultuous USA ‘94 campaign, he’d plundered 24 goals in 37 games at international level and, more importantly, earned himself worldwide attention.

Where you choose to place Batistuta on the Premier League timeline depends on which stage of his relentlessly consistent career he might have chosen to try his luck. The further back you go, the less obvious the destinations become: in September 1994, the Independent (with a healthy dollop of scepticism) reported the rumour that Batistuta’s situation at Fiorentina was being monitored by Ipswich Town manager John Lyall. Take a moment, if you will, to admire this collection of words:

The link wasn’t quite as incongruous as it now looks two decades later. Lyall was reportedly also keen on Batistuta’s international teammate, 32-year-old defender Oscar Ruggeri, and Ipswich did secure the young full-back Mauricio Taricco that summer. So let’s safely imagine that the Tractor Boys completed their sensational triple swoop. 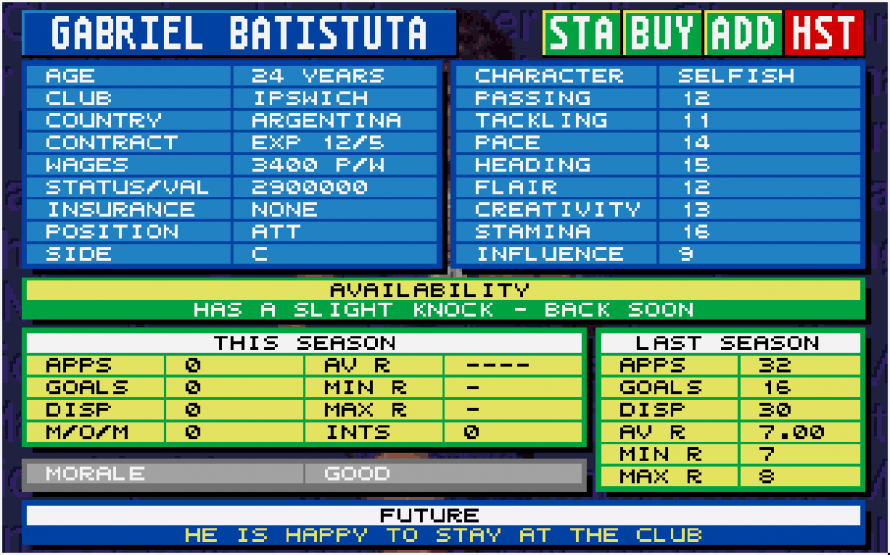 It would be one thing to pull of such a transfer coup, but quite another to keep Batistuta happy at Portman Road. It would take just one season - in which even 20-odd goals from their star man wouldn’t be enough to stave off relegation - to persuade the Premier League big boys to make a move. In 1995, when about £10m would have been the going rate, there was only one candidate with the financial clout for that.

Batistuta was a long-term target for Sir Alex Ferguson, even before he came to Old Trafford and nearly blew a hole in the torso of Mark Bosnich from 30 yards. 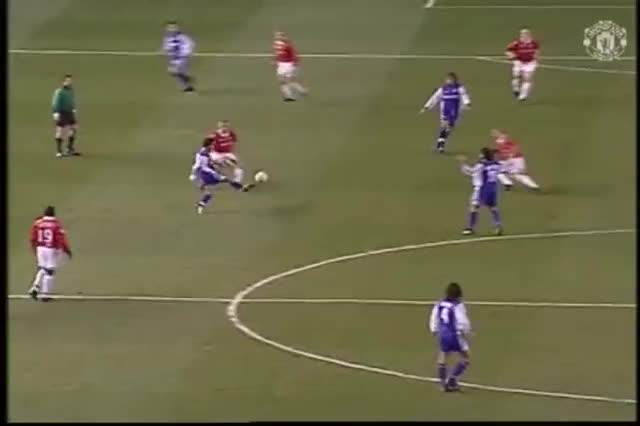 United first emerged as a possibility in 1998, when Batistuta’s loyalty to Fiorentina was given a thorough examination. "I would like to go to England but I don't know," he said before the World Cup in France. "There are various teams that interest me, but the most important thing for me would be that they would allow me to fight for the championship. Manchester United, Liverpool or Arsenal, no problem, they are all very good. In two or three years, it is a possibility.” 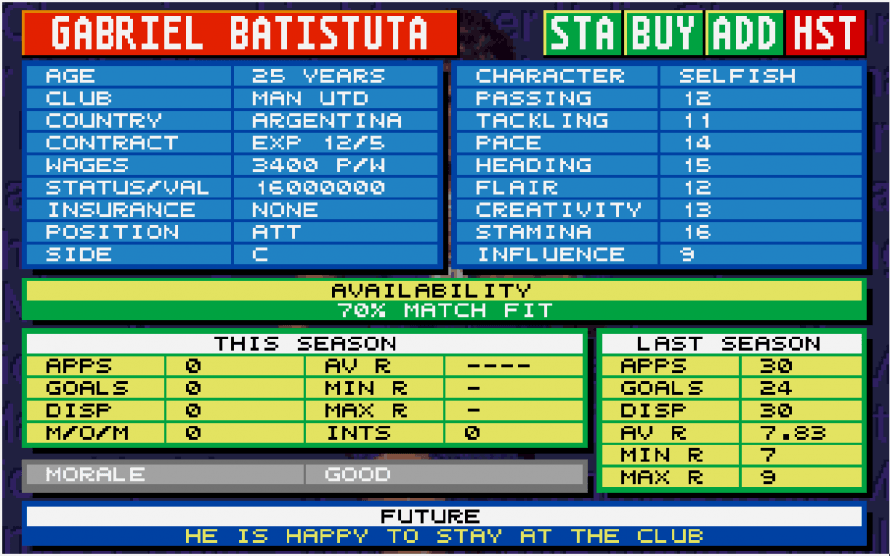 The prospect of moving to Old Trafford was raised again in early 2000, before he decided to stay in Serie A and join Roma, where he would finally win the Scudetto he craved. “If I ever leave Fiorentina I would very much like to go to Manchester United,” he told the Observed, “because out of the three best teams in Europe - United, Lazio and Barcelona - Manchester, in my opinion, is the best.”

The biggest obstacle to the move - apart from Fiorentina’s stubborn refusal to sell while Batistuta was at his peak - was United chairman Martin Edwards, who revealed in 2013 that “[Ferguson] was very keen on Gabriel Batistuta at one stage but his personal terms didn’t fit in with our wages structure at that time.”

Putting aside the issue of luring Batistuta to England in the first place, there can surely have been no world-class striker better suited to the Premier League. His bombastic, shoot-on-sight style wouldn’t have taken long to adapt, which would have been bad news for aspiring Goal of the Month winners. 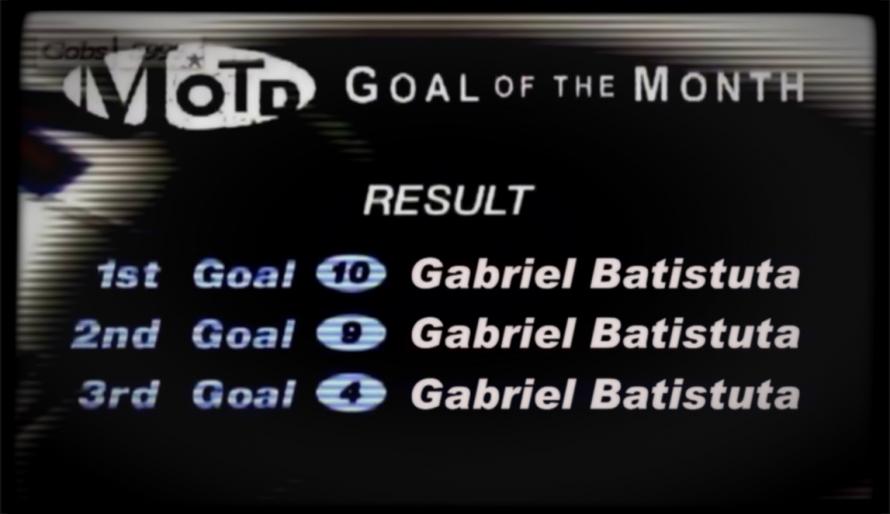 English defences certainly didn’t cause him too much concern. Before he reduced Old Trafford to awe-struck gasps in 2000, Batistuta had made Nigel Winterburn look rather inadequate at Wembley as he cruised past him to hammer a trademark finish beyond David Seaman. 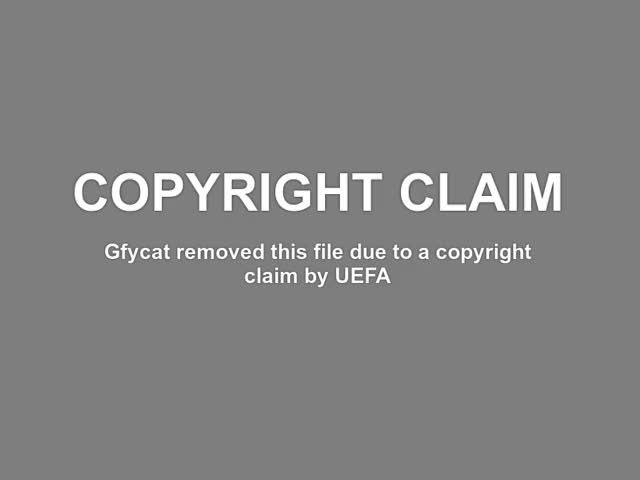 In an era dominated by all-round centre-forwards, willing and able to score any type of goal, Batistuta would have comfortably enjoyed the same goalscoring success as Alan Shearer or Les Ferdinand in the Premier League. His gloriously indelicate approach to scoring goals would have flourished even in the most unglamourous of surroundings; after all, hitting the ball as hard as you can is a tactic that works just as well at Selhurst Park as it does at the San Siro.

The body of evidence from Batistuta’s career, all the way from his formative years in Buenos Aires to his twilight months in Qatar, suggests he would have settled into the Premier League groove without much melodrama. Even if goalscoring records didn’t tumble - Shearer would have surely clung on to those - there’s something about Batistuta’s warrior-like persona that would have ensured club-legend status: at Ipswich, Manchester United or anywhere.