Garbine Muguruza is the first Spanish woman to win the WTA Finals end-of-season tournament after a straight sets victory over Estonia’s Anett Kontaveit in Guadalajara – and the win was hailed by an enthusiastic Mexican crowd as if it had been one of their own.

The 28-year-old Muguruza, born in Venezuela before moving to Europe, had been a huge hit with the Latin American fans the whole week and the 6-3, 7-5 win over Kontaveit – a second time in the event after also beating her in the group stage – was sufficient to see her lifting the Billie Jean King trophy and pocket the handsome £1.1million first-prize cheque.

King herself was there for the 50th staging of the Finals in its various guises and different names, along with first winner Chris Evert and Martina Navratilova. And although she has won both Wimbledon and the French Open in her career, the moment was clearly a very sweet one for the new world No3 as Muguruza attempts to reclaim the No1 status she formerly enjoyed.

With coach Conchita Martinez guiding her, it has been a fine year for Muguruza, winning in Dubai and Chicago and getting back into the top 10 as well as reaching the WTA Finals for a fourth time.

World No1 Ash Barty, the Finals winner in 2019 with last year’s event cancelled due to the Coronavirus pandemic, was certainly a big miss for this tournament, having taken time off after a gruelling eight-month stint away from home. But after losing a tight group match on a tie-break in the third set to Karolina Pliskova, Muguruza then swept all before her.

Serving was always going to be a major factor in the final against the big-hitting Kontaveit and the Spaniard’s stood up better, with double faults and an inability to get the first ball into play at crucial times hurting the new world No7, a highest ever ranking.

But Kontaveit, 25, the first Estonian to qualify for the Finals as a beneficiary of Barty’s absence, can be very proud not only of what she has done in Mexico, but a huge breakthrough season that saw her win 29 of the previous 32 matches before the final in an incredible hot streak of form. There have also been titles won in Cleveland, Ostrava, the Kremlin Cup and Transylvania in a campaign that saw a grand total of 48 tour victories. 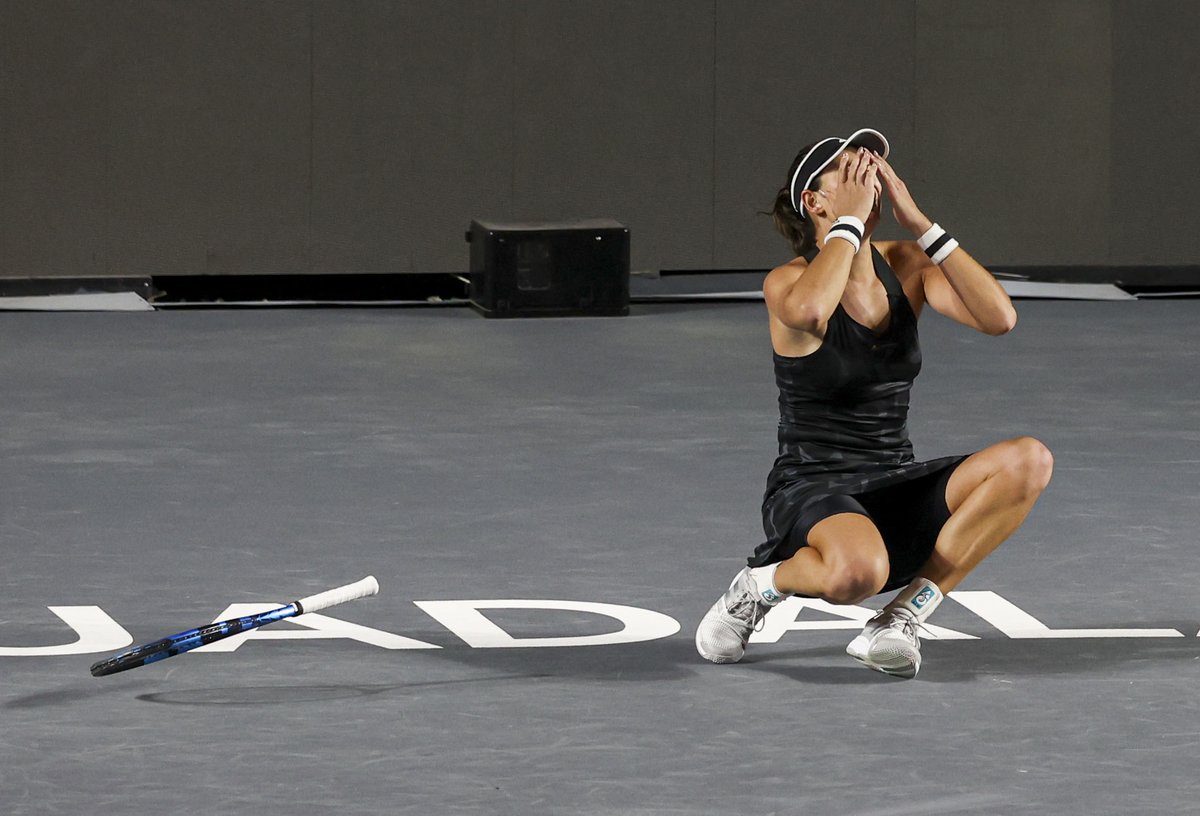 Muguruza had very clearly enjoyed her time in Mexico, pictured dancing in the streets of nearby town Tequila earlier in the week and walking out for the final in a Mexico football shirt – a none too subtle appeal for crowd support that worked like a dream.

She said: "I remember when [WTA CEO] Steve Simon told me that Guadalajara was an option for the Masters I was like ‘Oh my god, I have to make it’. I really appreciate the effort of bringing this tournament here. The public has given me everything here, thank you very much.

“It has been a dream come true, so thanks to the public because they have made this so special. I have never played with such an audience. I don't know what Mexico has that makes me excited .

“I would like to congratulate Anett for her incredible year, and for her amazing run in the most recent tournaments – it has been amazing. And sorry that we had to play twice here in Mexico.”

The objective for Muguruza now next season must be to start making more inroads into the draws at the Grand Slams having not got past the fourth round in any of them in 2021. The successes at Wimbledon in 2017 and Paris the year before already seem a long time ago for an excellent athlete with such a strong all-court game.

Including the group win Muguruza came into the final with a slight 3-2 advantage in the career head-to-head against Kontaveit, who had though emphatically beaten her 6-1, 6-1 at the Kremlin Cup. By reaching the final the Spaniard matched the achievement of Aranxta Sanchez Vicario 28 years ago, who lost in four sets to Steffi Graf.

Having elected to serve at the start of the match Kontaveit got away with double faults in the opening game, but was not so lucky in her second service game as Muguruza took advantage and got the early break. However that advantage was temporary as the Estonian hit back immediately before consolidating by holding to lead 3-2.

That, though, was as good as it got for Kontaveit in the first set as Muguruza swept her aside winning the next four games, profiting from a higher unforced error count from her opponent. But she reserved her best shot of the set for the most important point, closing it out 6-3 with an exquisite lob – a shot that was supposed to be even harder to pull off and keep from drifting long at the 5,000 foot altitude.

The second set was closer, the first six games going with serve until Kontaveit got what looked like it might be a decisive break in game seven, then adding her own serve to lead 5-3. However, that only served to provoke Muguruza into another powerful surge, and she won the last four games for a famous success.

x
Suggested Searches:
Manchester United
Liverpool
Manchester City
Marcus Rashford
Premier League
More
tennis
Zverev Wins ATP Finals Title To Cap Incredible 2021
Alex Zverev stormed to a second ATP Finals title in grand manner, beating world No2 and defending champion [ ... ]
tennis
Norrie Ready For First Clash With Djokovic Despite Opening Defeat...
After receiving a late call-up as an alternate for his debut appearance at the glamorous ATP Finals, [ ... ]
tennis
WTA Finals SF Preview: Debutants Seize Their Moment In Mexico
The WTA Finals debutants have certainly grabbed their opportunity this year. From the semi-final line-up [ ... ]
tennis
Is It Time For Roger Federer To Consider His Retirement From...
Roger Federer is not only one of the greatest tennis players of all time, but one of the greatest athletes [ ... ]
tennis
ATP Finals Preview: Novak Djokovic Bidding To Match Roger Federer...
No London, no Roger Federer, and no Rafael Nadal – but the Nitto ATP Finals in its new home of [ ... ]
tennis
Raducanu’s Promising Partnership With Beltz Will Add Stability...
She promised that she would have a coach in place by the end of the year and now it is confirmed, with [ ... ]
tennis
Djokovic Eclipses Sampras, But Why Isn't He Loved Like Nadal...
Novak Djokovic just can’t stop breaking records as he looks to eclipse the fellow greats of this [ ... ]
tennis
Australian Open Up In The Air As Host Nation Remains Divided...
The Australian Open is just under three months away and there is still doubt over what is going to happen [ ... ]
tennis
Emma Raducanu Needs Patience And Breathing Space To Reach Full...
Despite having already won a Grand Slam title, rising tennis star Emma Raducanu has stressed that [ ... ]
tennis
Another Brilliant Brit: Cameron Norrie Achieves Career High...
This is truly a unique moment in modern British tennis. Just five weeks on from Emma Raducanu’s [ ... ]
tennis
Raducanu Needs To Tread Carefully In These Early Days As Tennis'...
After falling at the first hurdle in Indian Wells last week, tennis’ golden girl Emma Raducanu [ ... ]
tennis
Cameron Norrie Sets Novak Djokovic Target After Breakthrough...
Cameron Norrie is flying this season. Now into his first ATP 1000 Masters quarter-final, in which he [ ... ]
tennis
Zverev Provides Andy Murray With A Litmus Test As Part Of His...
Sir Andy Murray has been one of Britain’s greatest athletes of this generation and while his achievements [ ... ]
tennis
How The Rest Of 2021 Is Shaping Up For US Open Champion Emma...
Everybody wants to watch Emma Raducanu. In the space of just a few months she has gone from relative [ ... ]
tennis
Media And Ex-Pros Need To Follow Andy Murray's Lead Over Emma...
The UK is still basking in the triumph of 18-year-old Emma Raducanu at the US Open over a week ago, [ ... ]
tennis
Medvedev Destroys Djokovic's Calendar Slam Dream With Magnificent...
Daniil Medvedev shattered Novak Djokovic’s dream of becoming only the third man ever to achieve [ ... ]
tennis
Novak Djokovic Chases Grand Slam Immortality In US Open Final...
27 matches down, one to go. Novak Djokovic doesn’t want to talk about it but he is just one game [ ... ]
tennis
Relentless Raducanu Makes Sporting History With Sensational...
When Emma Raducanu’s US Open odyssey began against Bibiane Schoofs on 25 August, the only spectators [ ... ]
tennis
Raducanu Vs Fernandez Promises To Serve Up A Historic US Open...
It has been a long time coming but Great Britain has once again got a female finalist in the US Open [ ... ]
tennis
Teenage Sensation Emma Raducanu Rewrites History As She Makes...
The look on Emma Raducanu’s face once she had won match point in her semi-final with Maria Sakkari [ ... ]
tennis
Leylah Fernandez Following The Pep Guardiola Model On Her Run...
Canadian tennis player Leylah Fernandez has been a breath of fresh air at the US Open in New York and [ ... ]
tennis
Emma Raducanu's US Open Performance Proves Incredible Resilience...
England’s brightest young teenage talent was vilified by certain sections of the English media. [ ... ]
tennis
Diamonds Aren’t Forever: We’ll Miss Roger Federer When He’s...
“We can’t fool ourselves: we have not got 10 years remaining of Federer. He is one of the [ ... ]
tennis
Novak Djokovic Is Right, It's Time To Get Serious About Player...
The judgement on player welfare has often been clouded by the amount of money these sporting superstars [ ... ]
tennis
20 Times A Champion - But Why Is Novak Djokovic Not Loved Like...
Novak Djokovic’s 20th Grand Slam title at Wimbledon on Sunday saw him go level with tennis’ [ ... ]
tennis
Djokovic Makes History With 20th Grand Slam Men's Singles Title...
Novak Djokovic has won his 20th Grand Slam singles title – equalling the men’s record held [ ... ]
tennis
Ashleigh Barty Emulates Evonne Goolagong 50 Years On With First...
World number one Ashleigh Barty has emulated Australian legend Evonne Goolagong and won Wimbledon for [ ... ]
tennis
Italy Eye Up Super Sunday As Berrettini Faces Djokovic In Wimbledon...
It could be a very special Sunday for Italy as their men face England in the Euro 2020 final and now [ ... ]
tennis
Wimbledon Men's Semi-Finals: Can Anyone Stop Novak Djokovic...
The men’s Wimbledon semi-finalists were confirmed on Wednesday after some intense quarter-final [ ... ]
tennis
Ashleigh Barty To Take On Karolina Pliskova In Women's Wimbledon...
World number one Ashleigh Barty will play Czech eighth seed Karolina Pliskova in Saturday's Wimbledon [ ... ]