The last time Gareth Bale started a third game in succession there were more than 20,000 people in attendance and not a single person on the planet had contracted Covid-19. He marked that occasion with a pair of equalisers in a 2-2 draw away to Villarreal, where the temperature was in the thirties, Bale was back in the good books of his Real Madrid boss Zinedine Zidane and everything was looking up for the Welshman.

He would be sent off in injury time that night at El Madrigal after arriving a fraction late for a 50/50 challenge and seeing a second yellow card as a result. Calf, thigh and ankle problems would plague his 2019-20 season thereafter, and by the time Covid was taking hold across the world, Bale was lucky to be getting a spot on the Madrid bench, much less the field, as Zidane ran out of patience with him yet again.

On Sunday night he finally made a third straight start again, this time in a different white shirt, in a different country, and in a very different climate in more ways than one. No fans were at a chilly White Hart Lane to see Tottenham Hotspur beat Crystal Palace 4-1 but there were some similarities to Villarreal in September 2019 as Bale once again netted twice and will have left the pitch feeling as though there is light at the end of the tunnel.

Having struggled to convince Tottenham boss Jose Mourinho of his readiness to play at various times this season and caused confusion recently due to his insistence he was not fit to play in the FA Cup loss to Everton, Bale finally seems to have hit the stride that Spurs fans have been wishing they’d see for most of the season. And on the evidence of Sunday night, he is really beginning to hit it off with Harry Kane. 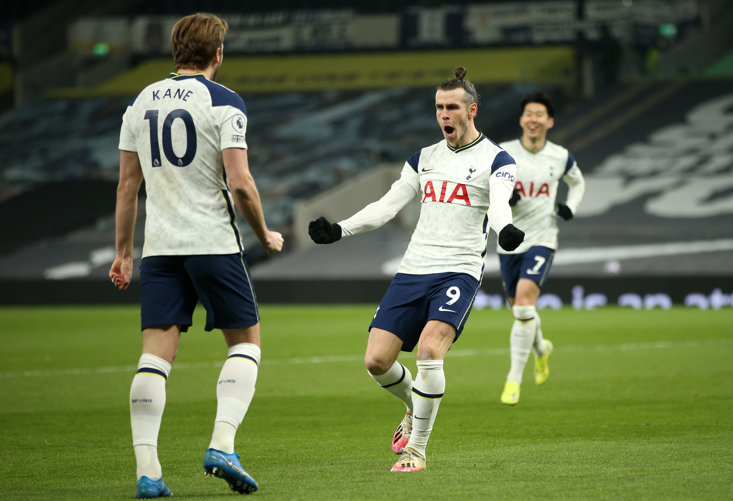 BALE AND KANE GRABBED TWO EACH ON SUNDAY

The England front man set up his first goal, making the most of space in behind to head for the bye-line and square for Bale to tap home. He followed that up by teeing the Welshman up again, heading the ball back across goal for Bale to head past Vicente Guaita and put Spurs back in front after Christian Benteke’s equaliser on the stroke of half-time. Soon after Kane would score a stunning third, sweeping an unstoppable shot across Guaita into the far top corner from outside the area after a neat move down the right, and rounded out the scoring by nodding into an empty net from Son Heung-Min’s centre 14 minutes from time.

After a double at home to Burnley last weekend, Bale’s latest brace is further evidence of his return to form. Sure, he will probably never again be the player who Real Madrid parted with €100 million for in 2013 but nobody would expect that of him at the age of 31. What he can be, though, is a key component in Spurs’ end-of-season push for Champions League football.

"I feel good. It takes a bit of time sometimes but I'm experienced enough to be patient," Bale told Sky Sports after the match. "Football's a strange thing, you can go through bad form and good form, so it's just about being patient and when you get your chance trying to take it.

"I'm not 21 anymore, it is what it is, and I'm just going to keep working hard. Your body changes over time, you haven't got that youthfulness anymore, you can't be sprinting for 90 minutes. You learn about your body and that's what I'm trying to do."

Bale’s three straight starts have borne three straight wins and Tottenham are now just two points shy of Chelsea in fourth. Mourinho would do well to do whatever he can to get Bale out on the field as often as possible between now and May, with Spurs’ multitude of attacking weapons making them a real threat on the top four.

What happens for Bale, for Spurs, and for Mourinho, beyond this season is open to question. But right now, the man who was once the most valuable footballer in the world is becoming the not-so-secret weapon in Tottenham’s late stake for Champions League consideration.