Jamie Carragher has urged football fans to come together to stop the proposed Super League which has rocked the game while Gary Neville described Manchester United’s Glazer owners as 'scavengers'.

The two Sky Sports pundits spoke passionately ahead of Leeds’ clash with Liverpool, one of the twelve clubs who on Sunday announced they would be taking part in the new European competition, and were forthright in their views, strongly against any such breakaway league.

While Chelsea, Arsenal, Manchester City, United and Arsenal are the other five clubs set to play in the Super League with Barcelona, Real Madrid, Atletico, Inter, AC Milan and Juventus, former Reds defender Carragher believes supporters and the media have the power to halt any such plans.

“I think these clubs think this is a done deal, it’s done,” he said on Monday Night Football. “I don’t think it is, I think supporters up and down this country can stop this - I really do believe this and I think at the forefront of that will be Liverpool because I’ve seen it before.

“We have tribalism in this country, we have rivalry, that’s what makes the game we love. Football fans get together, all of us, in TV, pundits, players, managers, get together and stop this because it can be stopped. I’m convinced of it. Going forward, I think that’s what we need, marches on stadiums, supporters getting together, this cannot be allowed to happen.”

Neville, who spent 19 years at Old Trafford and won eight titles with United, was scathing in his assessment of the ‘big six’ owners. He admitted he was worried when he saw the co-chairman Joel Glazer’s name on the official Super League statement and said, “Off the backlash, the media reaction - the immediate fan reaction was awful towards it - I was hoping they would re-think it. When I woke up, I saw the statement and it had Joel Glazer’s name on it, I thought: ‘This is a problem, big problem’. He doesn’t put his name on anything, that man.

“He’s intelligent, he knows what he wants and he’s parked his weasels and he’s come out. This is serious, he’s not backing down, he’s going to try and push this through. Once he puts his name on it, he’s going to try and force this through. They’ve been through hell at Manchester United in the early years. They don’t care, and when I saw his name on it, I was really worried.” 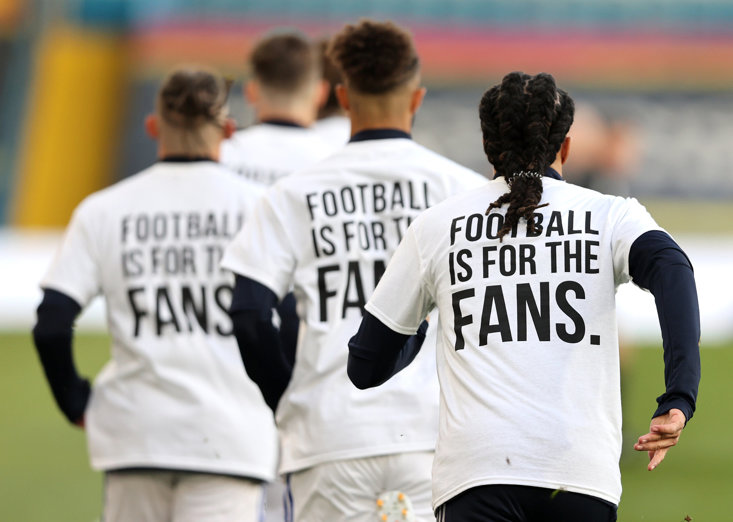 LEEDS UNITED WERE CLEAR IN THEIR STANCE

Prime Minister Boris Johnson and Prince William, president of the FA, both aired their concens about the breakaway league on Monday while many fans on social media were totally against it and Neville has been buoyed by such strong comments but believes the football community faces a massive challenge and added, “I’m enthused by the reaction of the Government, by royalty, by the whole of football, by the fans, but if they get this through, if they push this through and these owners have pushed difficult things through for their clubs in the past. (Tottenham chairman Daniel) Levy is steel-like, the Glazers are steel-like, (Chelsea owner Roman) Abramovich is hard as nails, he won’t care about criticism.

“It will change football in this country forever, forever, and we have to now mobilise, organise, it’s difficult not to get emotional and feel sick but you have to write to your MPs, you’ve got to write to your local football clubs, everybody’s got to come behind this. Pundits for BBC, ITV, BT Sport, forget allegiances, forget who you support, we’ve got to come together to stop this proposal.

“This is an attack on everything that’s been important in this country, football has helped in the last ten months in the midst of pandemic, more than ever, to keep people going, and they’re trying to take it away from us.

“I’ve stayed quiet over the Glazer family on the basis that it’s still Manchester United, I can still watch them play, I can still be happy and sad. If they take dividends out, I can live with that slightly. I can’t live with them attacking every football fan in this country.

"They’ve overstepped the mark. They are scavengers, they need booting out of this football club and out of this country."

Ahead of Monday’s match, Liverpool manager Jurgen Klopp spoke about the proposal and it seemed he only learned of it at the same time on Sunday evening along with every fan.

“Obviously I heard first-hand about it yesterday and when you’re trying to prepare a game, a very difficult game against Leeds United,” he said. “Then we got some information, not a lot to be honest, most of the things you more or less can read in newspapers or wherever.

“It’s a tough one. People are not happy with it, I can understand that, but there’s not a lot more I can say about it to be honest, because we were not involved in any processes.

“Not the players, not me. We didn’t know about it. That’s the fact, the facts are out there, and we will have to wait and see how it develops.”

Leeds players, meanwhile, made a strong statement in the warm-up, wearing T-Shirts over their training gear which featured the slogan ‘Football is for the fans’ on the back and ‘Earn it’ on the front below the Champions League badge.