Former Wales and British Lions star Gavin Henson has admitted the rigours of Rugby League training have been ‘savage’ and a shock to the system with him now making 20 more tackles than he did during his union days.

Henson, who turned 39 on February 1, signed for the West Wales Raiders in September having last played rugby union for Dragons exactly two years ago. Released at the end of the 2018-19 campaign, he did not announce his retirement and is now eager to try Rugby League though he revealed practice has been gruelling.

Speaking exclusively ahead of the Betfred Challenge Cup draw which will take place on Thursday, Henson told Betfred’s Lewis Smith, “I’m very much looking forward to it and seeing who we get in the cup. I had my first session last Tuesday, that's three sessions in now and it’s pretty tough. To be fair I haven’t trained for two years, haven’t been in the gym for two years and so I don’t know if it’s a bit of that or Rugby League training is savage!

“I’m a bit behind but I’ve got about six weeks until the game if I get picked so I’m just working hard to get back in shape.”

Henson made 33 appearances for Wales and played a test for the Lions in New Zealand back in 2005 and was one of the stars of rugby union in the 2000s. However, now making the switch at the twilight of his career, he has been surprised by the ferocious nature of training.

“It’s so different to rugby union,” he explained. “I can’t get over the contact side of it, it’s flat out, it’s 100 per cent. Last night, I probably made about 30 tackles, it’s just crazy. In rugby union I’d probably make seven or eight in a game day so I don’t know what’s going to happen on game day in rugby league.”

Having had time away from the sport and turning 40 next year, it can’t be easy so why has Henson made a comeback? Quite simply, he’s not ready to call it a day yet and still has plenty to give.

“I’m quite competitive and missing something,” he says. “Obviously messing around playing football, that’s given me something but I’ve missed the contact side. It’s nice to get a ball in my hand and I thought I’d give it a go.

“I’ve always watched rugby league and thought that would be quite cool to have a go at and now playing at this level where the commitment is only a Tuesday and Thursday night and play on a Saturday or Sunday it suits me. I am getting a bit older but hopefully I can get a season or two in,” he smiled.

Henson, who has been told he will play as a six or seven, revealed one Rugby League Hall of Famer has bigged up the sport in previous conversations.

“It is special,” the Welshman said of the Betfred Challenge Cup. “I also spent time with Martin Offiah on a certain TV programme, Hunted. He’s forever telling me about his statue at Wembley and to be fair I can remember watching some of his greatest moments at Wembley on TV. He told me all about it and that made me even more interested. It will be great to play in this cup game.” 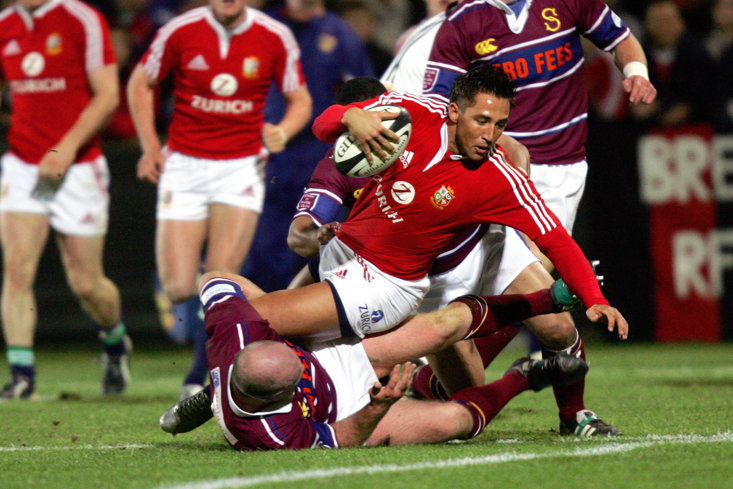 Henson’s switch of rugby codes has been a long-time coming. Making a name for himself in union, his career could have been very different had he listened to offers from rugby league.

“I did have a few opportunities,” he revealed. “When I was 19 or 20 we had a coach, Clive Griffiths for Swansea, and they were going through a mess at the time - administration and everything. I was kind of like the next big thing but not really yet and I was saying to Clive that a few clubs were interested but he said you only want to go there if maybe St Helens or Wigan. It was Widnes at the time but I did contemplate it a little bit. It’s definitely something I wish I’d done but it’s nice now to have a go at this level and see where it takes me.”

A star of rugby union, a man of Henson’s standing and stature will be keen to excel in league, no matter how hard the tackles come.

x
Suggested Searches:
Tyson Fury
Manchester United
Marcus Rashford
Lewis Hamilton
F1
Air Jordan
More
rugby-league
Wigan v Saints And Hull FC v Hull KR Headline Betfred Super...
Local bragging rights will once again be on the line in the Betfred Super League when the Rivals Round [ ... ]
rugby-league
Castleford Tigers Vs Salford Red Devils Begins Long-Awaited...
After a year out due to the Covid pandemic, Magic Weekend is back and it has now been confirmed that [ ... ]
rugby-league
Price To Leave Warrington In 2021, But The Wolves Are Well Placed...
Steve Price will leave his position as Warrington Wolves head coach at the end of the 2021 Betfred Super [ ... ]
rugby-league
Gavin Henson's West Wales Raiders Draw Widnes Vikings In Betfred...
West Wales Raiders, who have caused a stir during the off-season with the big-name signings of Gavin [ ... ]
rugby-league
Betfred’s Passion For Rugby League Continues With Challenge...
Betfred have stepped up their continued support for rugby league and announced they have become title [ ... ]
rugby-league
Why Rugby League Is Desperate For Government Help Amid Coronavirus...
On Sunday, rugby league had a rare moment in the spotlight. With no football on, Sky Sports invited [ ... ]