Boxing
News
The deal begins with his fight with Sergiy Derevyanchenko in October
Kieran Spratt
16:24, 22 Aug 2019

Former-middleweight champion Gennady Golovkin announced that his company GGG Promotions have agreed a deal with Eddie Hearn and Matchroom Boxing USA to work together to promote the Kazakh boxer’s future events.

The deal is set begin with Golovkin’s showdown with Sergiy Derevyanchenko for the vacant IBF World Middleweight title on October 5 at Madison Square Garden in New York, which will be broadcast live on DAZN.

The 37-year-old returned to winning ways in July against Canada’s Steve Rolls, after suffering his first career defeat at the hands of Saul ‘Canelo’ Alvarez in their second thrilling encounter at the tail-end of 2018.

I’m always happy to work with the best in business, and I’m looking forward to what this collaboration will bring to the boxing fans. 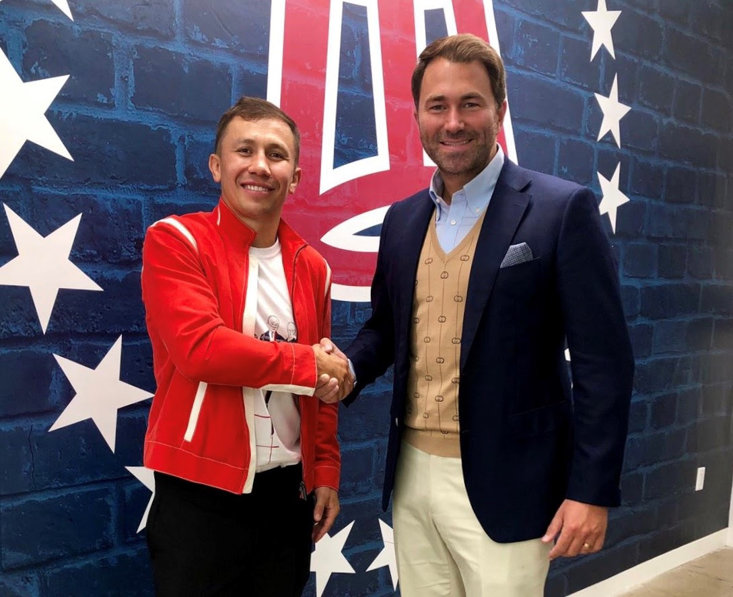 Hearn was similarly enthusiastic about working with his new acquisition, unsurprising given how Golovkin is undoubtedly one of the most popular active fighters in the world right now.

He added: “I’ve long admired Gennady as a fan and how he conducts his business and we team up at a very exciting moment. Gennady is one of the most recognizable and entertaining fighters on the planet and I can’t wait to get started to work together on the upcoming World title challenge against Derevyanchenko.”

The question on every fight fan’s lips is whether we’ll finally see Golovkin fight his nemesis, ‘Canelo’, for a third and final time, and while Hearn acknowledges it’s the fight that everyone wants, he was also adamant there’s plenty of other big fights out there for the 2004 Olympic silver medallist:

“We know the world wants to see the Canelo trilogy but there are so many opportunities out there for Gennady all over the world and we look forward to working together on them. First things first is for Gennady to win the title on October 5.”

Last week, former-WBO middleweight champion Billy Joe Saunders also joined forces with Hearn and Matchroom meaning a tantalising match-up between himself and GGG is now closer than ever to fruition.