George Williams scored the crucial try against his former Wigan Warriors teammates as Warrington Wolves confirmed a top-three finish in the Betfred Super League with a 10-6 win in an almighty battle at Magic Weekend.

The England half-back was up against his old club having returned to Super League in July following the controversial early termination of his contract with NRL club Canberra Raiders. And it was perhaps inevitable that the big-money addition should have the crucial say, with his ‘cupped ear’ celebrations in front of his former Wigan fans being the latest twist in the Williams saga.

After Josh Thewlis had taken advantage of a Sam Halsall error in the first minute from a Gareth Widdop bomb to give Warrington the lead, Williams burst through to score a second Wire try midway through the first half. Ethan Havard put Wigan on the board with a touchdown shortly before half-time, but the lack of points in the second half served to make Williams’ try the key contribution in the game.

Wigan general manager Kris Radlinski this week revealed that Wigan had offered Williams a contract which amounted to “the biggest ever contract [offered by the Warriors] in 149 years” when he became a free agent after he left Canberra to return to the UK during the pregnancy of his partner. 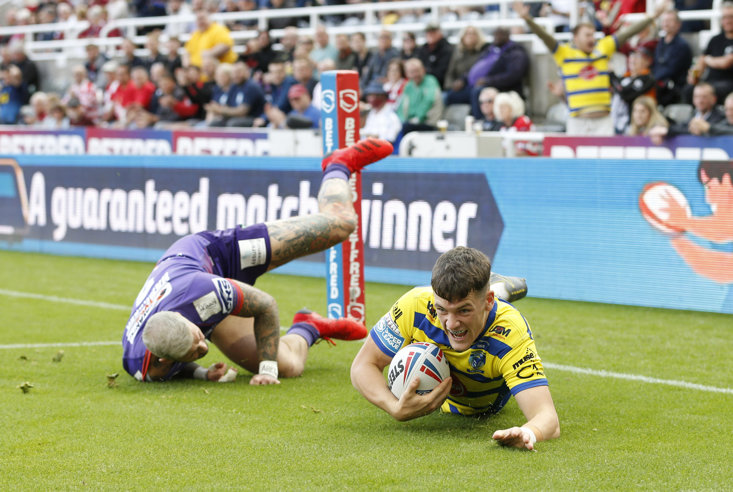 JOSH THEWLIS GOES OVER FOR THE OPENING TRY

But he chose to sign on with the ambitious Wolves, and his match-winning try at St James’ Park in Newcastle will be seen as proof that he made the right decision in moving to the Halliwell Jones Stadium.

The Wolves will now be hoping they can make a late challenge for second spot after St Helens’ dramatic collapse to a 31-30 loss against League Leaders’ Shield winners Catalans Dragons on Saturday, along with the free pass to the semi-finals a top-two finish brings. Meanwhile, Wigan’s main objective over the closing couple of rounds will be staving off the likes of Leeds Rhinos and Castleford Tigers to clinch a home tie in the elimination play-offs.

Earlier in the day, Willie Poching’s phenomenal run as interim coach of Wakefield Trinity continued with a 32-18 win over Huddersfield Giants in the first game of day two in Newcastle.

After Will Pryce’s opening try for the Giants, Wakefield bounced back through Tom Johnstone and never trailed again. Ryan Hampshire, Kelepi Tanganoa, Reece Lyne and Chris Green also crossed for Trinity, taking them to four wins from five since the sacking of Chris Chester, who was in the crowd cheering his old troops on just a few weeks on from the end of his five-year stint at the Mobile Rocket Stadium.