The build-up was elegant in its simplicity. A searching cross met with a looped header into the six-yard box. The finish was typical, poked into an almost-empty net by a perfectly-placed centre forward. The scorer was inevitable; Gerd Muller. ‘Der Bomber’. The seminal penalty-box finisher of his era. West Germany had eliminated England, the world champions no less, from the 1970 World Cup.

Bayern Munich and Germany icon Gerd Muller tragically passed away on Sunday, aged 75. His winning goal to eliminate England at the quarter-final stage in Mexico was far from his only legendary strike. It was not even his only immortal contribution to a World Cup. Muller would score the winner in the 1974 final, a 2-1 win over the Total Football of Johan Cruyff’s Netherlands. But the goal in Mexico is perhaps Muller’s most keenly-felt contribution by English fans. It arrived during a tournament illuminated by the prolific forward.

Gerd Muller would score 10 goals in Mexico, claiming the Golden Boot in the process. This places the German third in the all-time list of single-tournament World Cup scorers, and no player since has surpassed his total. Remarkably, Muller reached this tally in only six games as, despite netting a brace, he saw his team eliminated in the semi-final by Italy. His vindication would come four years later on home soil in that dazzling victory over the Dutch. 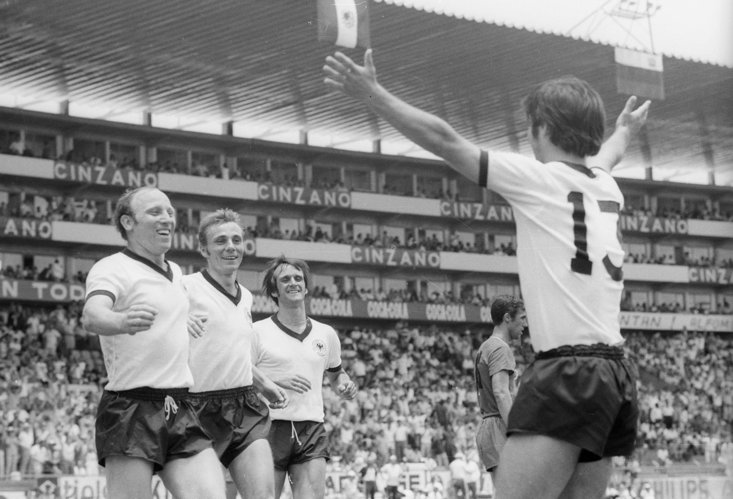 MULLER CELEBRATES ONE OF HIS 10 GOALS AT MEXICO '70

England have since become hardened to tournament eliminations, with any ‘Three Lions’ revisions requiring a lyrical change to “55 years of hurt” and counting. But in 1970, Sir Alf Ramsey’s side were riding high from lifting the Jules Rimet trophy four years previously, and fully expected to sweep West Germany aside on the way to a second consecutive final. Confidence was dented when totemic goalkeeper Gordon Banks pulled out shortly before the game with an upset stomach. His gloves would be occupied by Chelsea’s Peter Bonetti, who looked out-of-practice having not played a full game since the end of the previous season.

Tame substitutions, including replacing Bobby Charlton with Colin Bell in order to rest the Manchester United man for a semi-final that never came, coupled with an uncertain Bonetti performance, saw the game poised at 2-2 entering extra time. Geoff Hurst’s luck ran out, as this time a heroic potential winner would be disallowed. Then the inevitable arrived in the form of ‘Der Bomber’. The Bayern man, hungrily stalking the six-yard box for chances, would push Johannes Lohr’s header past the hapless Bonetti. England were out of the World Cup.

The match seemed to conclude an era, and start another that would define the modern England malaise. England would never again lift a World Cup, nor reach a final. Bobby Charlton would never play for England again, his substitution serving as an undignified end to perhaps the greatest Three Lions career. England would not qualify for another World Cup until 1982. They would also never again enter extra time against Germany with the confidence they displayed in 1966.

Gerd Muller scored 68 goals in 62 caps for West Germany. Perhaps none had a greater impact on the fortunes of a rival footballing nation than the one he scored against England in Mexico in the summer of 1970.