Over 1,000 fan groups from football clubs across Germany have signed up to an official campaign to protect German football’s so-called “50 plus one” ownership rule.

The rule stipulates that a football club and its membership must control 50% of the shares in its professional football team – plus one share – thus preventing outside investors from acquiring a majority stake and ensuring that the fans theoretically remain in control.

Critics believe the 50+1 rule discourages investment in Bundesliga clubs and therefore limits the ability of German sides to compete either with Bayern Munich domestically or in the Champions League internationally.

Advocates, on the other hand, argue that 50+1 safeguards German football clubs from the whims of dubious investors while simultaneously ensuring that German football remains community-orientated and supporter-friendly.

The German Football League (DFL) recently called for a “fundamental debate” on the future of the ruling but supporter groups have been vocal in their opposition to any change and have now launched the “50 plus one stays!” campaign.

‘Football belongs to all of us’

“Every week, football brings hundreds of thousands of different people together,” read an official statement released by the campaign organisers on Wednesday morning. “[Football] doesn’t belong to individuals, businesses or investors. It belongs to us all and must not become a play-thing for the few.”

“The abolition or even the proposed relaxation of the 50+1 rule would fundamentally change the game,” continued the statement. “The pressure to compete would inevitably increase for all clubs and the financial power of some owners would suddenly become more important that the solid, successful work of others.”

“Ultimately, it’s all about more money which ends up in the pockets of the usual suspects. But it doesn’t make football better for us fans, nor does it strengthen its social importance. On the contrary.” 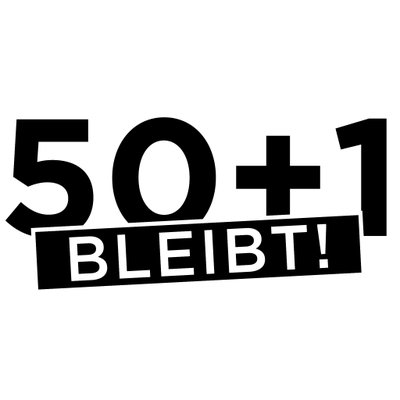 Matt Ford
@matt_4d
Over 1,000 supporters groups from clubs across Germany have signed up to the campaign “#50+1 stays” - in support of German football's #50plus1 ownership rule which prevents single investors acquiring majority stakes in football clubs. 🇩🇪
37
103

With Bayern Munich currently 20 points clear at the top of the Bundesliga and on course for a sixth consecutive league title, concerns have been raised in Germany about the competitiveness of the country’s top division.

The Bavarians are also the only remaining German team in this season’s Champions League after Borussia Dortmund and RasenBallsport Leipzig both failed to make it out of the group stage – an issue addressed in the campaign statement:

“Much has been said about the international competitiveness of the Bundesliga. But do we really want to follow the example of crazy money in Paris or the absurd market in England?”

Speaking to public radio station Deutschlandfunk at the weekend, Philipp Selldorf, a journalist with German broadsheet Süddeutsche Zeitung, also cast doubt on the idea that opening the Bundesliga up to free market investment would boost the league’s international competitiveness.

“That’s a very spurious argument,” he said. “Through its TV deals, marketing and advertising revenues, the Bundesliga has a huge budget. Only the English league earns more.”

“And if we relax 50+1, where will the money go? Will it really lead to greater sporting competitiveness? Will Eintracht Frankfurt suddenly be able to compete on a par with Atletico Madrid or Tottenham Hotspur? I seriously doubt that.”

Coincidentally, the launch of the “50 plus one stays!” campaign follows several high-profile developments in English football in recent weeks.

Disillusionment and anger over West Ham United’s botched move to the London Stadium culminated in anarchic scenes during the Hammers’ defeat to Burnley on Saturday, while Southwark Council has had to step in to save seventh-tier Dulwich Hamlet from eviction from their ground.

This week, Tottenham Hotspur attracted criticism following the publication of ticket prices in their new stadium which supporters’ groups say could price out significant parts of the local community.

For advocates of German football’s 50+1 rule, such developments are all examples of what can happen when football supporters don’t have a say in the running of their clubs.

“Rather than calling for a debate on how professional football is increasingly distancing itself from normal people, the 50+1 rule is being fundamentally questioned,” the campaign statement continued.

“But we won’t let them take it from us.”