Another Ghana v Uruguay fixture at the World Cup, another penalty nightmare for the Black Stars. And again Luis Suarez played a pivotal role in their demise. The problem for Uruguay this time was that they still couldn't do enough to avoid a group-stage exit.

Twelve years ago it was Asamoah Gyan’s miss in the dying moments of extra-time after Suarez’s infamous handball that led to La Celeste’s quarter-final penalty shoot-out win. This time around it was an appalling effort from Andre Ayew in the first half of their Group H fixture which paved the way for Ghana’s 2-0 loss in Al Wakrah. The only comfort they will take from their elimination is that they got to see Suarez and Uruguay suffer at the same time.

That penalty miss, though... Mohammed Kudus had gone through on goal on the right of the area 20 minutes into the Group H encounter, only to be clipped by goalkeeper Sergio Rochet. But Ayew’s effort from the spot was truly abysmal. With the weight of these nations’ shared history on his shoulders, he made it far too easy for Rochet to make the save low to his left.

And what happened five minutes later? Suarez, naturally, had a hand in Uruguay’s opener. It was his shot which Lawrence Ati Zigi failed to hold, with Giorgian De Arrascaeta stooping to nod into an empty net. Six minutes on the same pair were at it again, Suarez deliciously flicking Darwin Nunez’s header behind himself for De Arrascaeta to volley past Ati Zigi for a second.

What had been billed as a revenge mission for Ghana had instead turned into a terrible case of deja vu. There was almost a Uruguayan red card to match Suarez’s back in 2010, but De Arrascaeta got the benefit of the doubt over an apparent stamp on Seidu Alidu shortly before the break.

It was a moment typical of a spiky, fractious encounter, one in which every decision was debated, almost every moment injected with needle of some kind. But that was exactly what was expected given the rhetoric which has followed their 2010 meeting. 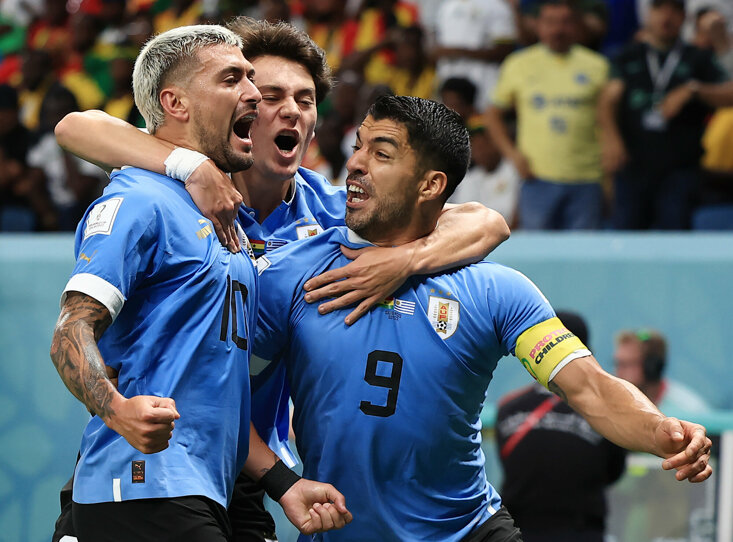 SUAREZ TWICE TEED UP DE ARRASCAETA BUT IT WASN'T ENOUGH

There have been claims that Ghana were cheated back in 2010, and the fact that the continent was denied its first ever World Cup semi-finalists will continue to smart a bit. Whenever Suarez touched the ball in his 65-minute display in Al Wakrah he was jeered by the Ghanaian section, and his second-half booking was cheered to the rafters. His role in that 2010 elimination will never be forgotten, despite the fact Gyan was given a glorious chance to win the tie from the spot.

But on this occasion there was no winner for either side. Just as at Crystal Palace in 2014 when his Liverpool side had blown a 3-0 lead to all-but lose the FA Premier League title race, Suarez was visibly distraught after news came through that South Korea had scored a winner against Portugal which sent Uruguay out. When his tear-stained face was shown on the big screen at the Al Janoub Stadium, the howls of laughter coming from the Ghanaian section were deafening. Uruguay threw everything at getting the extra goal they needed in the eight minutes of injury time but it was all for nought.

Ghana head home smarting once more from failure at the hands of La Celeste. They become the first nation ever to miss two penalties in normal play against the same opponents, and while this one might not go down in notoriety it will be no less painful for Ghanaians. Seeing Suarez's World Cup career come to an end in tears will undoubtedly take a little of the edge off, though.