Manchester City will go into Christmas atop the Premier League table, while Newcastle United may need a miracle befitting 34th Street to escape the drop come May. The Cityzens rarely strayed out of second gear at St James’ Park, but walked out comfortable 4-0 winners.

This game always looked like a tall order for Eddie Howe’s men, and so it proved from the get-go. A defensive catastrophe put the home side behind after just five minutes. An Oleksandr Zinchenko dink found Gabriel Jesus, and after a herculean effort to keep it in the ball bounced between Ciaran Clark and Martin Dubravka. Neither Newcastle player reacted, and instead Ruben Dias nodded it in from close range. It was a truly baffling dereliction of duty at the back for the Magpies.

Newcastle did have some moments of encouragement. Robbed of the penetration and speed of Allan Saint-Maximin, it fell to Miguel Almiron to provide the creative spark. He stretched and prodded the City defence, but to no avail. Joelinton also looked motivated, and one powerful run from deep could only be stopped by a cynical Rodri foul.

City had looked disjointed since scoring, but when their second goal arrived it was utterly memorable. A typically slick passing move, the hallmark of the Pep Guardiola touch, ended with the ball at Joao Cancelo’s feet. He moved centrally from his wide berth, sending Joe Willock and the Newcastle defence in his wake, before launching a peach of a strike from the edge of the box. The performance had not got out of second gear, but this goal belonged in the top drawer.

Newcastle had a penalty shout waved away late in the half. Ederson bundled Ryan Fraser over with the ball long gone, but nothing was given. It seemed to be a clear penalty, with Ederson barely looking like he was trying to win the ball, but this pivotal moment went against the hosts. 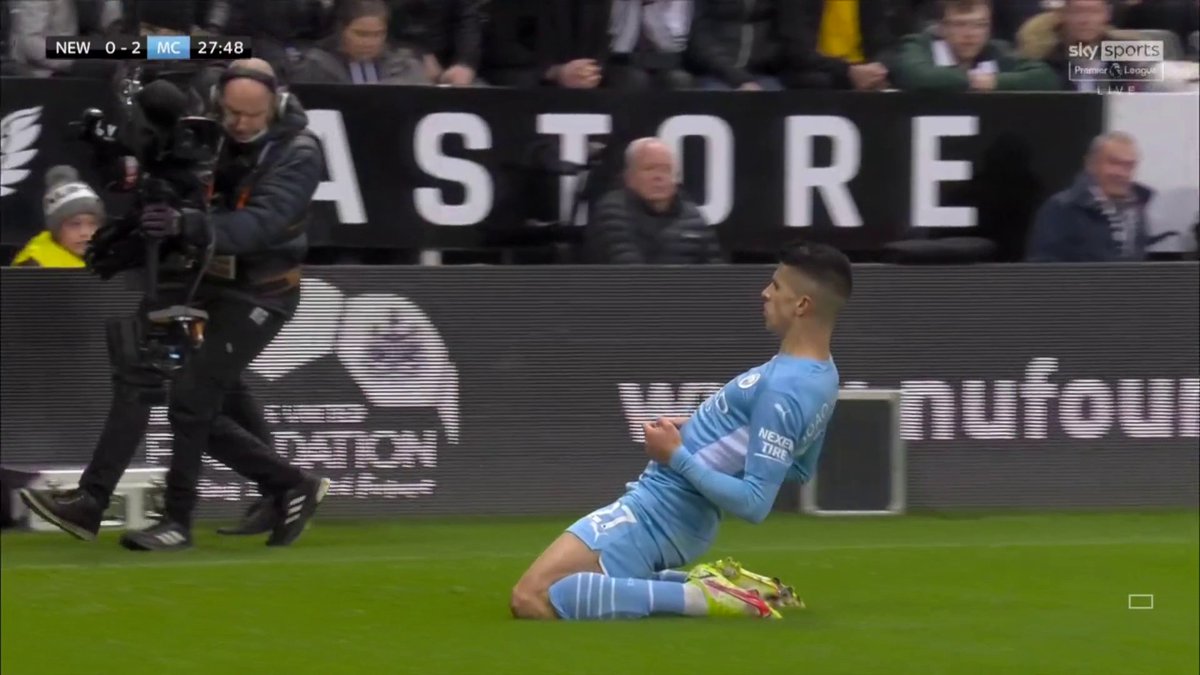 Allan Saint-Maximin was brought on at half time to try and rescue a desperate situation. The City defence got an early look at his pace as he raced down the left flank before whipping in a ball that Aymeric Laporte reached before Callum Wilson. It was one of a few scattered successes Newcastle enjoyed in the half, as the Cityzens turned the screw.

Dubravka was called into action, saving superbly from a close-range Raheem Sterling header. An intelligent Kevin de Bruyne ball found Jesus in the box, but Jamal Lascelles reacted quickly to the danger and snuffed out the shot. City finally increased their lead when Riyad Mahrez found the back of the net from a superb Zinchenko ball. He was initially flagged for offside, but the decision was rightly overturned and the goal stood.

The largely untroubled Ederson was called into action just once late on, but Newcastle could not convincingly impose themselves. Sterling sealed matters late on with his 101st Premier League goal. A tap-in at the back post after a rampaging Jesus run and cross, Sterling has scored plenty of more difficult goals but this one was a testament to his instincts.

Newcastle are still yet to take points off a team in the top ten this season, while City will now go into the festive period as the Christmas Number 1. Are any of their title rivals equipped to rage against the machine in the New Year?