The Women’s World Cup has been nothing short of a sensation this summer with millions of people tuning in and thousands of fans packing into the stadiums around France. More people in the Netherlands  (3.5m) watched their World Cup last sixteen game than watched the men’s Nations League final (3.2m) and the tournament has been taking off all over the world.

In Brazil, 35.2m people watched their last 16 defeat to hosts France, a game that made history by becoming the most watched Women’s World Cup match of all time. On home soil, the Lionesses have been breaking records themselves, first of all a record 6.1m people watched their opening day win over Scotland but that was broken as 6.9m Brits tuned in to see them fight their way past Cameroon in the last sixteen in what was a feisty encounter.

That record is predicted to tumble yet again on Thursday as England take on Norway in the last eight, as they look to make it into the semi-finals for the second successive World Cup. The heatwave in France is sure to impact the play on Thursday and the scorching weather is set to cross the channel and make for a beautiful weekend on the British Isles.

Glastonbury will be hosting hundreds of thousands of festival goers who will be enjoying the sun, party atmosphere and top class music. They will also have the opportunity to take in the Women’s World Cup on Thursday night thanks to a tweet from England player Georgia Stanway.

The Man City ace tweeted the biggest festival in the world to request that the game was shown, so that her little brother wouldn’t miss it as he is at Glastonbury. They tweeted back confirming that they would, which is a rarity for the festival.

This would be the first time a women’s game has been shown, with the last men’s football game being shown back in 2010 when England took on Slovenia in the World Cup. There is sure to be a packed out crowd watching the big screen on Thursday before the big acts begin to perform on Friday.

Come on the Lionesses!

BBC Radio 1
@BBCR1
When you're playing in a World Cup quarter-final but your brother's at #Glastonbury2019...
No problem! The @Lionesses match against Norway will be screened on the West Holts Stage #FIFAWWC 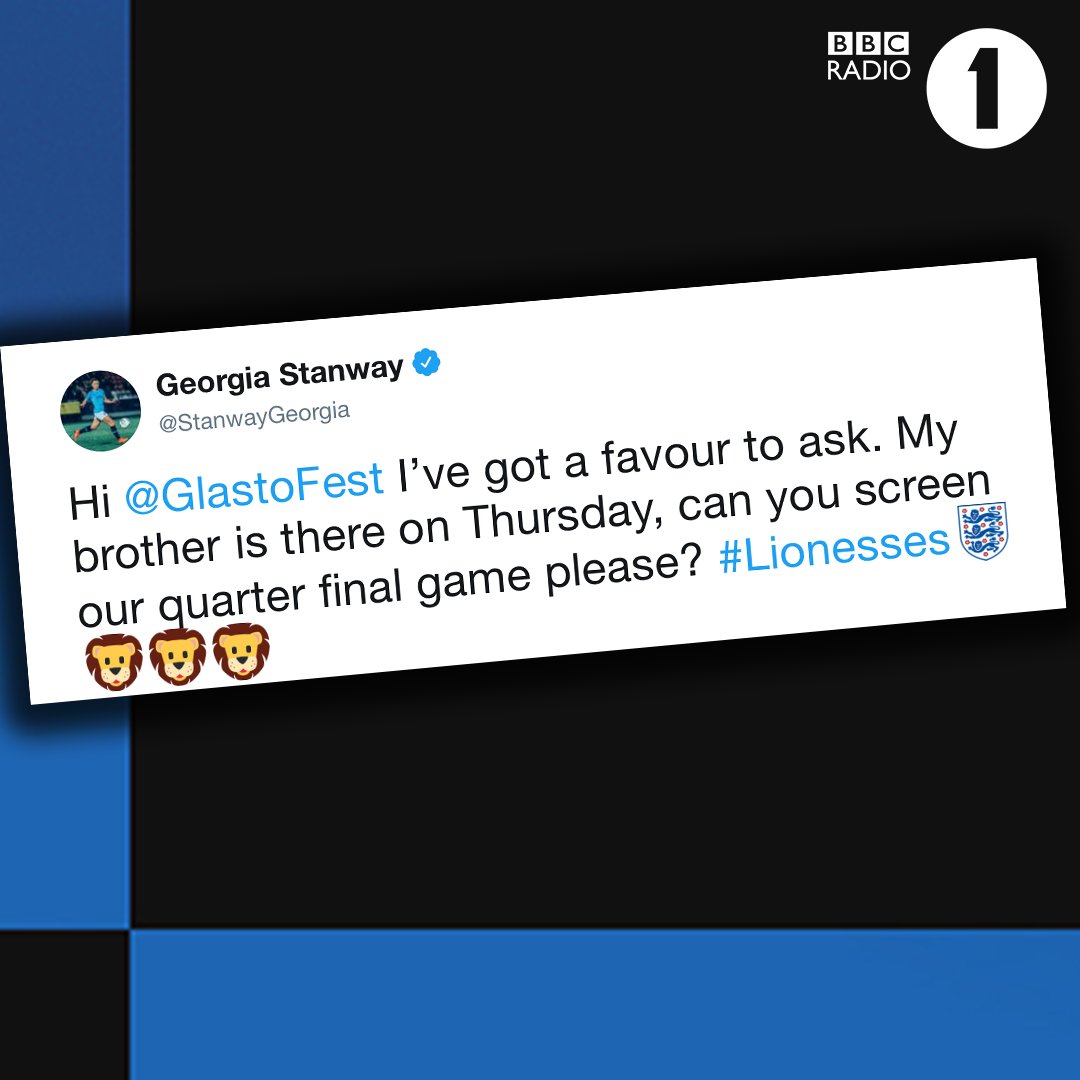 46
358
More
football
The Numbers That Prove The Women’s Super League Is The Best...
“We can say hand on heart we are the best league because we really are. All the best players want [ ... ]
football
Podcast Review - The Glenn Hoddle Footy Show
A quarter of a century since he last kicked a football professionally, and 14 years after his last coaching [ ... ]
football
Book Review - How To Run A Football Club: The Story Of Our National...
With an extended lockdown threatening the existence of a substantial portion of the United Kingdom’s [ ... ]
football
Thiago, Kalvin Phillips And The Premier League ‘Quarterbacks’...
Thanks for reaching out. You do the math. My bad. Americanisms, you gotta love ‘em. We’ve [ ... ]
football
Wayne Barton's Book On David Beckham Highlights Golden Balls'...
When historians look back at the sports scene at the turn of the millennium, there will most certainly [ ... ]
football
Rosé For Rodriguez, A Bollocking For Bilic, Five Stories You...
Managers can’t manage masks, fans are finding new ways to hail their heroes, and Jurgen Klopp [ ... ]
football
The Covid Defying Smart Helmet That Could Help Unite Football...
After the longest season in history, a mercifully short reprieve for players to catch their breath has [ ... ]
football
Get An Edge On Your Rivals This Season With The Fantasy Premier...
What are you this year? ‘Lallanas in Pyjamas’? ‘Murder on Zidane's Floor’? [ ... ]
football
Neymar's Handbags, Shy Guy Jose, And Other Football Stories...
Just like that, we’re back in the room. There’s new rules (on and off the pitch), and renewed [ ... ]
football
Celebrating The Return Of The Premier League With Its Best Ever...
After the shortest pre-season on record, even if it has felt to some of us like the longest ever, Premier [ ... ]
football
Lionel Messi Teams Up With Budweiser To Inspire Tomorrow's Footballing...
Lionel Messi, for all you do, this Bud’s for you. We’ve got to admit, it’s got a certain [ ... ]
football
From 007 to 46 Million Followers, Ten Facts You Never Knew About...
Everton finally announced the signing of James Rodriguez on Monday evening, after the Colombian superstar [ ... ]
football
The New Liverpool Book With A Groundbreaking View Of The Shankly...
September should always hold a special place in the hearts and minds of Liverpool Football Club and [ ... ]
football
The Questions We Want Answering After Watching All Or Nothing:...
“You have to be a bunch of bastards!” Annnd with that, we’re hooked. The last day [ ... ]
football
Football History Comes To Life With The Guardian’s Forgotten...
For much of 2020, the general consensus amongst the sporting community has seemingly been the desire [ ... ]
football
Book Review - Close Quarters: An Extraordinary Season On The...
He has been called the luckiest journalist in the world. When award-winning sportswriter Neil Harman [ ... ]
football
Work Out Like A Chelsea Player With The Most Advanced Football...
It claims to be the most advanced football training experience ever - imagine being trained by world-class [ ... ]
football
Blue Moon, Bubbles & Delilah - How Football Clubs Got Their...
Liverpool and Celtic fans both enjoy spine-tingling versions of ‘You’ll Never Walk Alone’ [ ... ]
football
The Lionesses Who Helped Lead The Charge In Lyon's Coupe De...
For the second time in less than a fortnight, Olympique Lyonnais and Paris Saint-Germain faced off in [ ... ]
football
Five Premier League New Boys That Are Set To Take Next Season...
A swift summer transfer window is on the cards, with just 48 days between Premier League seasons due [ ... ]
football
Bobby Robson And The Most Glittering Chapter In Ipswich Town’s...
Few in Ipswich could have predicted what was to come when Bobby Robson replaced Bill McGarry at the [ ... ]
football
How Tearing Down The Twin Towers Destroyed The Magic Of Wembley
On July 26, 1998, plans for a new Wembley were revealed to the world, promising a national stadium [ ... ]
football
Here's To The 2019/20 Premier League Season: Five Moments That...
It all began on August 9, 2019. 353 days later, a fortnight shy of a full entire year, the 28th Premier [ ... ]
football
Why Figo To Madrid Is Still Football's Most Controversial Transfer...
We’ve had Neymar, Sol Campbell and Carlos Tevez but on this day in 2000, Luis Figo completed the [ ... ]
football
Remembering Laurie Cunningham: The Football Pioneer Whose Legacy...
In 2016 the English Heritage scheme erected a blue plaque in Stroud Green, North London to celebrate [ ... ]
football
Book Review - King Eric: Portrait Of The Artist Who Changed...
Leeds. Irwin. £1million. Title. Double. Palace. Kick. Ban. Seagulls. Return. Liverpool. Double. [ ... ]
football
Replacing Rapinoe And Morgan? The Ladies Who Can Light Up The...
Write off 2020. The best thing about it is remembering how good 2019 actually was. One of the undeniable [ ... ]
football
Wembley Woe: When England Lost To Germany At Euro ‘96
In the summer of 1990 England tasted their first ever penalty shootout heartbreak when they went out [ ... ]
football
Get Ready For A Nostalgia-Fest With Italia '90 Podcast Vincerà!
Hosted by Mark Godfrey and running from June 8th to July 8th, Vincerà! is a 24-part podcast series [ ... ]
football
Harry's Heroes, Vinnie Jones And Revenge At The Battle Of San...
When Vinnie Jones started crunching San Marino players left, right and centre, it was clear the friendly [ ... ]