Rugby League
News
McGuire speaks to The Sportsman as he steers the ship at Hull KR until the end of the season
George Riley
10:35, 16 Jul 2022

“I still miss playing. The tough thing about being a coach is that you can’t physically influence a result.”

For every Franz Beckenbauer or Pep Guardiola, there’s a Roy Keane or Gary Neville. And as one of Super League’s greatest ever stand-offs dips his toe into head coaching, even he is uncertain of what lies ahead.

Danny McGuire won eight Grand Finals, two Challenge Cups and three World Club Challenge titles during a stunning career at Leeds that cemented his place as one of the most electric attacking half-backs the British game has ever produced.

His mentor at Leeds was coaching great Tony Smith. And such is life’s rich tapestry, that when Smith’s time as Hull KR boss was brought to an end last week, it threw his protégé McGuire in at the deep end.

“If I could have run on and started playing a little bit then I would have got more satisfaction out of that,” says the 39-year old, whose coaching debut ended with a thrilling loss to Hull FC in a classic derby at Magic Weekend on Sunday.

“Obviously I can’t do that anymore as I’m too old, too slow and too fat but coaching is the next best thing without a doubt to be able to influence players and watch them grow.”

McGuire is speaking to The Sportsman as he steers the ship at Rovers until the end of the season – when Smith was planning to leave and make way for incoming boss Willie Peters. But Smith’s sacking has given McGuire his unexpected chance, well ahead of schedule. 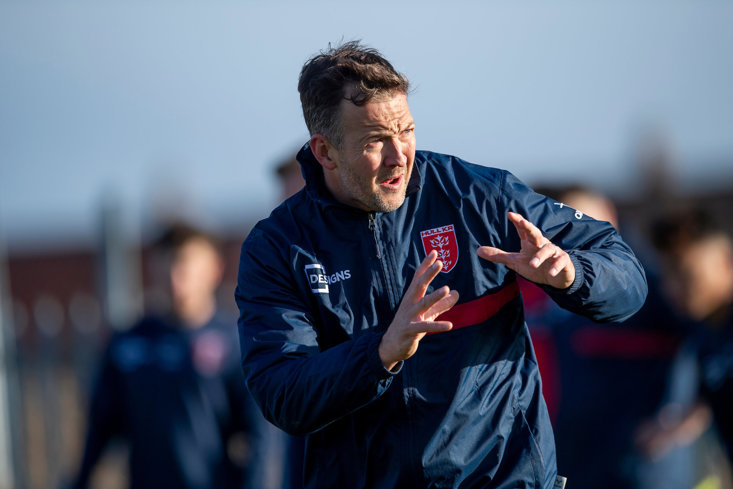 Such was the Great Britain international’s pedigree as a player, that it was almost accepted that McGuire would step into coaching and fast-track to the top. He was linked to the vacant head coach job at former club Leeds this season despite having never coached. Even he admits the link was ludicrous, and that his job was to knuckle down in Hull and continue his education under Smith. Now, he has until the end of the season to learn on the job, and lay the foundations for his own coaching career.

So can he cut it as a top-level coach, and what will Danny McGuire teams look like?

“I remember seeing the stress that the coaches went through (at Leeds) and Brian McDermott went grey within two year, he was jet black when he came,” says McGuire.

“I’m already a lot greyer. I’ve had some great coaches so I will pinch some things off all of them.

“My philosophy as a coach will be the kind of player I was. I like to chance my arm, I like to see things and take opportunities. But there has to be a balance, to earn those opportunities to throw the ball around, make offloads or kick on play three you have to earn the right to do that by laying a platform.

“I’m not sure we have got the balance right this year and have at times tried to play a bit too fancy. We have the tag of being a team who like to throw the ball around, and that’s fine and it is still the philosophy but it has to be earned and you have to be able to defend your line if things don’t come off.”

Zlatan Ibrahimovic once said he could never be a coach because “during the game I would punch at least two people, and after the game eight.”

Neville and Keane are proving to global television audiences that their passion for and understanding of football’s finer arts are second to none. But they have both proven that translating that into successful coaching is an entirely different proposition. Paul Scholes found that out too. Gazza, Maradona, football has a long list of superstar players who were not adequately equipped to excel in management.

McGuire says he was in awe of the work of McDermott, Smith and Brian McClennan - the men in charge for those eight Grand Final successes at the Rhinos. Something he says gave him a real insight and head-start into what he might be letting himself in for.

“When I saw the commitment and hard work they used to put in it kind of scared me off a bit, and really we used to have it easy as players. We would be in, do our jobs and get out of there. I appreciate that coaching is a full-time job. Last night I was sorting out a loan deal and making that call at half nine at night.

“It is not just coaching, there’s a lot of other things going on behind the scenes and I really enjoy that side of it. I love coaching, I was out on the field today and that is where I prefer to be but I do appreciate what it takes to do everything else and it is a tough job. I am just going to give it everything I have got knowing I am going to take a step back and get back to learning when Willie comes in next year.”

Of the many facets of management – coaching, counselling, logistics, planning, recruitment – it is the game-day environment in which many believe McGuire will excel.

Will his unrivalled instinct as playmaker in high-stakes, huge intensity do-or-die matches translate into a cucumber-cool coaching brain in those same high-pressure scenarios?

One thing is for sure – McGuire will trust his young players. Thrown in to sink or swim situations as a raw teenager from the Rhinos academy, McGuire had no option but to swim in those big games. And he’s ready to give that same backing to the next generation at Rovers.

“That is something I’m really keen to do,” he says.

“I loved seeing Zach Fishwick, a 17-year-old lad who was playing scholarship rugby last year, get his shirt off his dad on the Saturday and wearing it with pride on the Sunday last week.

The revered American college basketball coach John Wooden believed that the mentality of his players was the fundamental key to their performance, more so even that their natural or “god-given” talent. Assembling that right blend of character would grow a successful team. “Character is what you really are, reputation is merely what others think you are” was his mantra.

McGuire had that talent in bucketloads, enough already to carve him a reputation as an exciting young coach, and a future Rhinos coach, that he knows he neither yet deserves nor has earned. He will now practice what he preaches by putting the hard work in while hanging on to that thrilling raw love for exciting rugby league that gave him such success as a player.