Football
News
With a great record against Russia, the front man should fill his boots in Group B
Gary Maiden
08:57, 12 Jun 2021

Fresh off the back of firing Inter Milan to their first Serie A title since 2010, Romelu Lukaku will be looking to continue that form in Belgium’s Euro 2020 opener against Russia on Saturday evening.

Only Cristiano Ronaldo managed more than his 24 league goals in Italy last season, and the 28-year-old scored the only goal in Belgium’s final warm-up match against 2018 World Cup finalists Croatia.

The former Manchester United striker ticks several boxes that justify his tag as favourite to win the Golden Boot this summer.

He scored in his last outing for his nation, ended his domestic league campaign with a goal in each of his last three games, and has international tournament pedigree with four goals at the World Cup in 2018.

Harry Kane, with six strikes in Russia, was the only player to outscore Lukaku three years ago, and the England frontman is second to the Belgian in the Betfred betting to top the scoring charts.

During his time in the Premier League, Lukaku developed something of a reputation as a flat-track bully, with the majority of his strikes coming against defences that he was expected to dominate.

That criticism was perhaps harsh, but if there is any truth behind it, then he should have no problems in filling his boots in a group containing Russia, Denmark and Finland.

He will be confident of setting the pace for in the Golden Boot race against Russia on Saturday evening, with Stanislav Cherchesov’s men regressing somewhat in the three years that have passed since they hosted the World Cup. 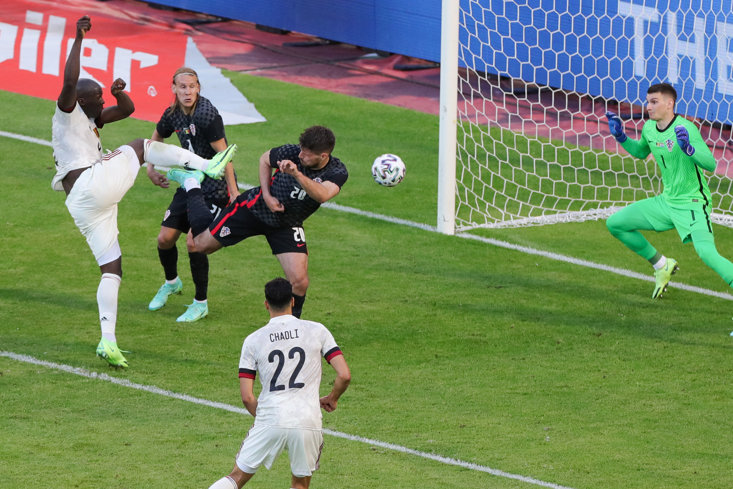 The Red Devils know they have the beating of Russia, having put seven past their Group B opponents in qualifying for this summer’s tournament.

Lukaku wrapped up the scoring in their 4-1 victory in St Petersburg back in November, and he will fancy his chances of starting his Euros with a bang at the Krestovsky Stadium on Saturday.

Continuing with the form against his group rivals, Lukaku bagged a late equaliser the last time Belgium and Finland faced off. It may have been five years ago, but the omens are certainly in place for him to hit the ground running in the group stages.

Both he and his national side have come a long way since then, with the best-ranked team in the world a far cry from the minnows of old.

As for Lukaku, his 113 Premier League goals are criminally undervalued, with his time at Old Trafford ending with a sour taste.

Since then, he has netted 44 goals in 63 league appearances at San Siro, with his strikes taking Inter to within a point of the title in the 2019-20 season, before firing Antonio Conte’s men to the title by 12 points this time out.

With 60 Belgium goals, the Anderlecht youth product is his country’s all-time top scorer, and by some distance. If Belgium’s ‘Golden Generation’ are to finally fulfil their potential and win a major tournament, they’ll be relying on the prowess of Lukaku to lead them there.

With 37 goals in his last 39 appearances under the guidance of Roberto Martinez, he is primed to do just that.

EURO 2020 TODAY: YOUR FULL GUIDE TO SATURDAY'S PROGRAMME
x
Suggested Searches:
Manchester United
Liverpool
Manchester City
Marcus Rashford
Premier League
More
football
Lauren James' Chelsea Return Will Be Major Boost For The Blues...
Lauren James has returned to Chelsea and it is certainly a signing that will excite Blues fans. Having [ ... ]
football
Tokyo 2020: All The Results From The Opening Round Of Olympic...
The first round of football fixtures for the Tokyo Olympics have been completed, with an excellent result [ ... ]
football
Why Rafa Benitez's Everton Transfer Business Makes Sense This...
Rafa Benitez has got his Everton rebuild underway with the new additions of wide-men Andros Townsend [ ... ]
football
Ellen White Brace Sees Team GB To Comfortable Win In Olympic...
Team GB’s women’s football team got their Olympic campaign off to a flying start after they [ ... ]
football
Is Managing Team GB's Football Team At The Olympics An Impossible...
The Team GB women’s football team get their Olympic campaign underway on Wednesday morning against [ ... ]
football
Salford City or Bradford? Early Pre-Season Tips For The 2021/22...
The League Two season is now just over two weeks away and clubs will be desperate to welcome back fans [ ... ]
football
Postecoglou's Celtic Reign Begins In Champions League But He...
Celtic’s 2021/22 season gets underway under the new regime of Ange Postecoglou as they host FC [ ... ]
football
Sunderland? Wednesday? Ipswich? Pre-Season Tips For The 2021/22...
The new Football League season is now only a matter of weeks away and clubs up and down the country [ ... ]
football
A Look Into The Pre Season Of Every Premier League Club
With less than a month to go until the start of the new Premier League season, the 20 best sides in [ ... ]
football
Transfers Of Every Premier League Club So Far: Confirmed, Rumoured...
Euro 2020 is over, and unless you are passionate about Olympic football, all eyes are on the start of [ ... ]
football
Can Great Britain's Women's Football Team Win Gold At The Tokyo...
As the Tokyo Olympic games are just around the corner, all eyes will be on Team GB’s women’s [ ... ]
football
Fulham or Swansea? Early Pre-Season Tips For The 2021/22 Championship...
England’s run at Euro 2020 seems to have done the trick, and there are now less than three weeks [ ... ]
football
The Football Stars Expected To Shine In Pursuit Of Olympic Gold...
Euro 2020 may have concluded with a heart-breaking end to another gripping tale under Gareth Southgate, [ ... ]
football
Messi Is Bigger Than Barcelona And Keeping Him At All Costs...
Lionel Messi’s love affair with Barcelona will continue. Briefly, last summer, it looked as if [ ... ]
football
From Aguero To Alaba, The Biggest Confirmed Football Transfers...
With the European Championships done and dusted, this summer all attention turns back to club football [ ... ]
football
Will England Be Considered For 2030 World Cup After Wembley...
England’s bid to host the 2030 World Cup along with the rest of the United Kingdom and Ireland [ ... ]
football
Stuart Pearce Offers Heartfelt Advice To Bukayo Saka After Penalty...
Penalty pain returned to haunt England in the final of Euro 2020, just as it did in 2012, 2006, 2004, [ ... ]
football
1996 v 2021 - How Did England Respond To Their Last Penalty...
It might have been a final this time around, but England have had to overcome penalty heartache in a [ ... ]
football
Wembley's Twin Towers - Bonucci And Chiellini Are The Key Pillars...
The Twin Towers were back at Wembley on Sunday night. Not the concrete pillars which made the old stadium [ ... ]
football
From The Best Game To The Best Goal, These Are Our Favourite...
As the dust settles on Euro 2020 and a marvellous summer of football, it’s time to sit back, relax [ ... ]
football
More England Penalty Heartache, But Would We Really Have It...
We’ve woken up with this same hangover so many times that we start to wonder why we still drink [ ... ]
football
How Italy Won Euro 2020
Italy are European champions after beating England on penalties at Wembley on Sunday, but how did they [ ... ]
football
A Country Scorned: How Italy Turned World Cup Disaster Into...
Italy was left on its knees when the final whistle went against Sweden at San Siro. The worst fears [ ... ]
football
Euro 2020 Daily Wrap: Italy Beat England On Penalties In Absorbing...
Euro 2020 came to a dramatic conclusion at Wembley on Sunday, with Italy getting their hands on the [ ... ]
football
England Foiled On Penalties Again As Italy Become Champions...
England’s hopes of lifting the European Championship trophy for the first time were stolen away [ ... ]
football
Nobody Has Ever Deserved International Success More Than Lionel...
It would simply have been cruel. Lionel Messi, one of the greatest players ever to step foot on a pitch, [ ... ]
football
The Backroom Staff That Have Guided England To The Euro 2020...
Gareth Southgate begins every international match the same way. Arm in arm with his fellow staff members [ ... ]
football
French Joy And Portuguese Despair: How Have Past Hosts Fared...
There has been an awful lot of discussion about the pan-European nature of Euro 2020, with Uefa president [ ... ]
football
Euro 2020 Final Betting Preview: Expect A Cagey Contest Between...
Recommendations  1pt Exactly one goal in the game @ 11/4 Advised in Outright Preview  2pts [ ... ]
football
England Euro 2020 Final Win Will Cost Me £5million, Says Betfred...
Betfred boss Fred Done believes that football coming home is “nailed on” when England take [ ... ]