Football
News
The stars that shone brightest on Europe’s greatest stage this week were the veterans
Conor Keane
13:05, 10 Mar 2022

We have been spoiled with some great Champions League football this week and the stars that shone brightest on Europe’s greatest stage were the veterans. Robert Lewandowski, Arturo Vidal, Karim Benzema and Luka Modric all showed their class and proved this generation isn't going to bow out so easily.

These players have given us some unbelievable moments over the years and they treated us once again over the last couple of days, leaving us in awe at the great longevity of their illustrious careers. Two of football’s most legendary strikers, Lewandowski (33) and Benzema (34), were both hat-trick heroes this week against RB Salzburg and Paris Saint-Germain respectively.

These two forwards have not only been part of one of the greatest generations of footballers but also one of the greatest for strikers. They will both leave an incredible legacy on football and if you weren’t already aware they have both been prolific in front of goal in the Champions League, Lewandowski and Benzema are both third and fourth respectively in the all-time goal charts for the competition with 85 and 79.

With the emergence of young talents Kylian Mbappe and Erling Haaland in recent years, it felt as though the changing of the guard was in motion, but as last night proved, Mbappe could still learn a lot from the likes of Benzema who schooled him in how to deliver a complete number nine performance at the Bernabeu.

Elsewhere, Liverpool may have progressed to the quarter-finals of the competition after beating Inter Milan 2-1 on aggregate, but they were rather fortunate to have progressed as the Nerazzurri turned in two really well-drilled performances and gave a good showing of themselves at Anfield on Tuesday night.

Their star player was 34-year-old Chilean midfielder Arturo Vidal, who has continued to excite fans at the highest level and his display against Jurgen Klopp’s side was one that was undeserving of a Champions League exit. Vidal covered so much ground, breaking up play, which became really frustrating for Liverpool. He was also instrumental in moments where his team broke forward. His best moment of the game was undoubtedly his brilliant block to deny Luis Diaz from point-blank range. 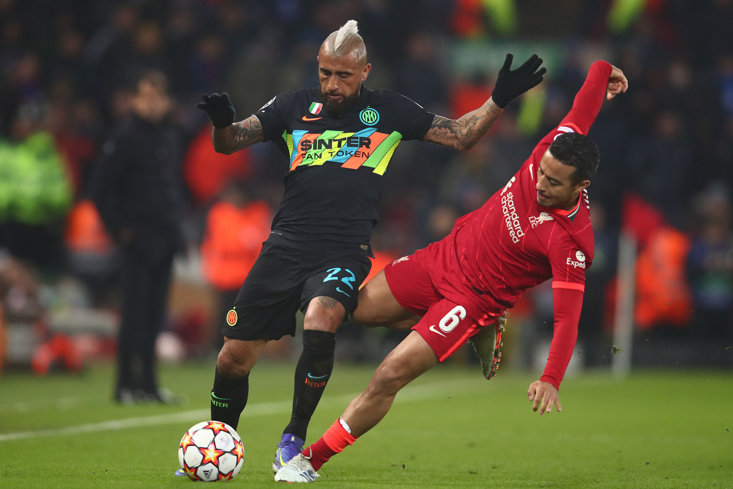 He wasn’t the only midfield maestro to roll back the years this week as Real Madrid’s Modric continued to show his class on the pitch with a commanding display in the heart of the Los Blancos side in their triumph over PSG.

His brightest moment of the game was the perfectly-weighted pass through to Vinicius Jr which eventually led to Benzema’s second goal. The Brazilian winger was in more than a capable position to score from that perfect pass between the lines and the Croatian deserved to record an assist for that sublime slip-through.

Even away from this week’s European action, there are still so many of this generation’s greats going strong at the highest level. They may be having quiet seasons compared to their usual high standards but Cristiano Ronaldo and Lionel Messi are still delivering, even if it isn’t all the time, at a huge level and that deserves nothing but admiration. Then there is Swedish star Zlatan Ibrahimovic who is still finding the back of the net at the age of 40 for AC Milan.

The longevity of this great generation we have been blessed to watch over the last 20 or so years is nothing short of incredible. Their love of the game seeps through every time you see them play and you just know how much it is going to pain them when they can’t physically give anymore and the curtain inevitably comes down.

However, the wonderful thing about these players continuing to give us moments of magic is that it suggests the curtain isn’t going to come down any time soon.