Horse Racing
News
This weekend there are huge races on both sides of the Irish Sea
Matt Hulmes
18:00, 20 May 2022

A Saturday of horse racing awaits that caters for all flat fans, with a Classic in Ireland, Group racing at a trio of Group 1 tracks and lots of competitive handicaps to solve.

A staying handicap at Haydock can stay local, courtesy of Donald McCain’s GOOBINATOR.

This is a deeper race than the one he won here in September over the same trip but he showed he was still well treated when fourth in the Cesarewitch at Newmarket and he returns here off the same mark. His three hurdles starts subsequently have been ok without striking the eye, but this is just his sixth start on the flat and he should have a big say.

Bandinelli is likely to be a warm favourite for Godolphin having just his 10th start, and having already won five including at Kempton in a race that turned into a sprint. He stays well though and a 3lb rise doesn’t look like it’s the ceiling of his ability.

A wide-open York sprint where runners take it in turns to strike.

I am going to throw an each-way dart at ZARGUN for Scott Dixon. The trainer landed the big sprint at the Dante meeting with Fine Wine but his stablemate here was a staying-on sixth. The race developed down the middle to far side with Zargun staying on strongly on the stands side having been under pressure for a fair way. That was his first run of the season so expect him to build on it, he has been dropped 2lb and has a good course record having been placed on all his three previous runs here before his seasonal debut effort.

Alligator Alley was just ahead of him and a third of the price. 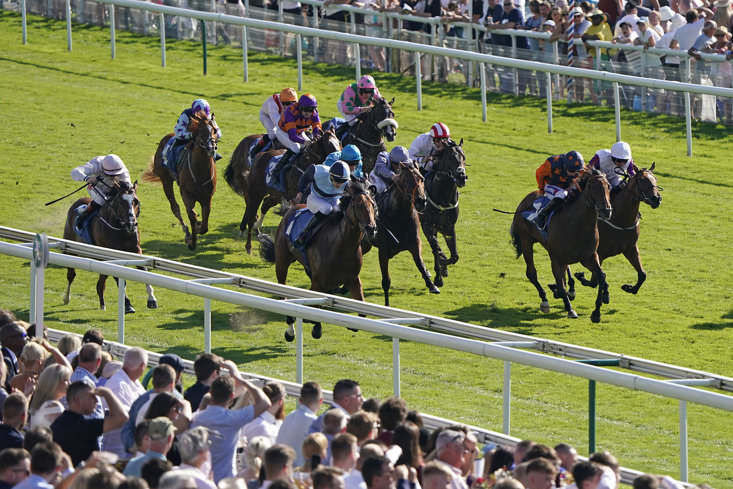 ALLIGATOR ALLEY (LIGHT/DARK BLUE) RUNS IN THE 2.55 AT YORK

All eyes will be on Native Trail after he lost his unbeaten record in the Newmarket classic. He was fantastic when winning the National Stakes here at the Curragh as a juvenile and connections will have high hopes he gets back to winning ways here. He is very short in the betting though and there is a chance that BUCKAROO could give him plenty to think about.

BUCKAROO was just caught close home by Derby hope Piz Badile in the Ballysax Stakes and then showed he has the speed for a mile when hosing up at the expense of Wexford Native over this track and trip dropped in class to listed company. The Derby was an option but connections have opted to take aim at this classic and the favourite will need to be on his mettle to repel him.

The Temple Stakes is the first big sprint of the season and is the perfect place in the calendar for a prep for Royal Ascot and the King’s Stand Stakes.

Nunthorpe heroine Winter Power makes her seasonal return, but she is short enough and holes can be picked in her form. She ended the season tamely in the Flying five and the Abbaye and the form of her Nunthorpe win is indifferent to say the least. Ok, the second Emaraaty Ana claimed group 1 success subsequently but hasn’t fired this term while those in behind continue t disappoint. She is thee from four at York, so the track clearly suits but this is a different test.

The key piece of form could be the Abernant Stakes at Newmarket three weeks ago where Khaadem scored and had a few of these in behind. That was a game success, but TWILIGHT CALLS was just over a length behind despite being the only runner who was stands side to get involved. He was racing away form the main action and I am taking him to overturn that form. He is having just his eleventh start here; I always admire Henry Candy sprinters and the yard had a timely winner at Windsor on Monday. Adam Kirby, who won this race in 2016 & 2017 also takes over tin the plate with David Probert claimed for King’s Lynn. There appears to be plenty of upside for TWILIGHT CALLS despite this being his toughest test to date.