Gary Neville described it as “a cowardly act,” to the nation on Sky Sports, riling up the whole Manchester United fan base who directed hateful abuse at the 24-year-old trying to make his name  in the Premier League. A five-game ban followed and spelt the end of Tyrone Mings’ season but he had been cast as the Premier League’s villain.

Two years on he is a Villain in every other sense of the word. A loan spell from Bournemouth to Aston Villa has reignited his career and he has inspired a promotion push that has lead Villa on an incredible run, to within touching distance of the play-off final.

This ‘bad-boy’ picture painted by the Premier League simply could not be further from the truth. He is one of the kindest men in football with one of the most inspiring stories, and someone who is now passing on his kindness to others in the game.

Mings lived in a homeless shelter growing up. His mum had been through a relationship break-up which left her, Tyrone and his three sisters helpless. During this time he was going through primary school and finding it difficult without a proper home to go home to. His family were eventually given a reprieve and put into social housing which allowed Mings to concentrate on his football, despite the setback of being let go by Southampton’s famous academy.

Mings worked his way back up the footballing ladder and got his big break when Ipswich gave him a trial after some impressive performances with Chippenham Town. Aged just 19, the defender played just as he does now, without fear. According to Mick McCarthy he ‘rollocked’ senior player Danny Higginbotham and that was enough to convince the club to sign him.

From then on Mings started to get noticed for his off-the-field gestures. In 2013, he donated two tickets to an Ipswich fan who couldn’t get to a game because he was ‘#skint’. On Christmas Day, he worked at homeless shelter aged just 20, proving himself to be a level-headed guy who hasn't forgotten his difficult childhood. 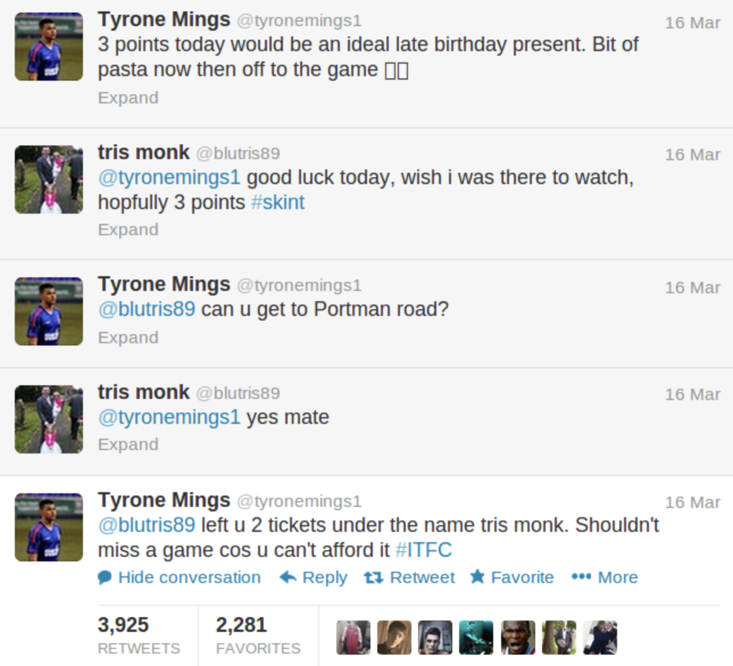 A few months later, Mings had established himself in the Championship and was given the number three shirt ahead of the new season. A handful of eager Ipswich fans had already bought the new shirt for the season his old number 15 on the back. A couple of tweets later and Mings had paid for and sent out new shirts with the ‘three’ on it for every fan who had got the wrong number. What a gent.

He told The Telegraph: “I’ve been in a lot of unfavourable situations growing up, so I know what it’s like to need help. If you are in any position of influence, then it’s almost your duty to try to help. If people don’t have the ability or opportunity to help themselves, then sometimes it’s got to come from someone who can.”

In 2015, he became Bournemouth’s record signing after their promotion to the Premier League and had made it to the big time. He was now a Premier League player and with his signing on fee, he wiped his mum’s debts clean allowing her to live her life freely. Since then he has also bought her a Range Rover to keep her and his sisters safe having had memories of a battered old car when he was a youngster. As you can see from the text below, his mum was more than grateful for this incredible gesture of goodwill. 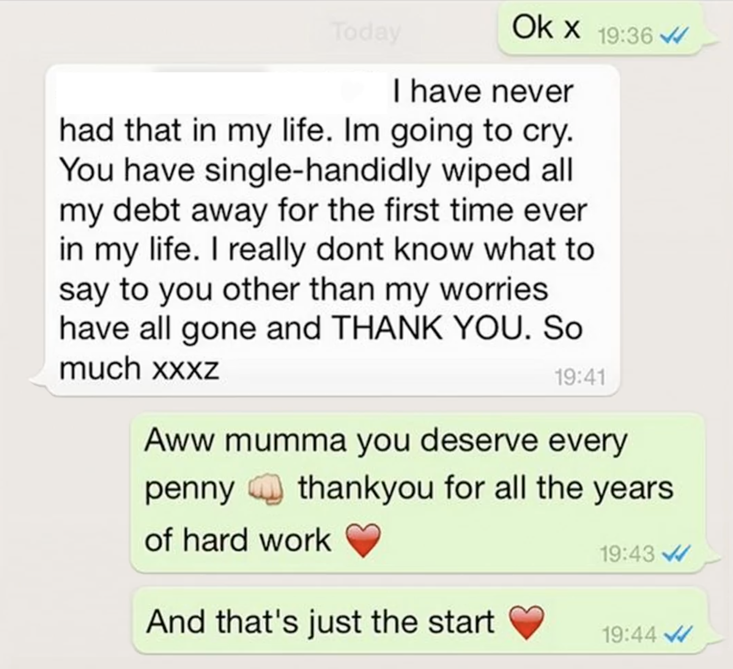 Mings has not had it easy since then. Injuries during his time at Bournemouth have tested his resilience and he has struggled with mental health issues during his low moments. A psychologist helped him out and he turned his attention to other interests, setting up an interior design business and spending more time with his family rather than stewing over football.

He has continued to help out mental health charities when he can, pushing the #KickUpChallenge on Twitter and speaking at Bournemouth University with Simon Francis about the topic. A move to Villa followed this January and he looked to be getting things back on track before another ‘stamp’ incident that once again painted him as the villain.

He accidentally collided with Nelson Oliveira against Reading, leaving him at the mercy of football’s opinionated fans once again. It wasn’t just the fans he had to deal with this time, Oliveria’s wife posted on her Instagram: “I hope someone will appeal for this guy to get a lengthy ban! There’s absolutely no excuse for his behaviour. He knew where his head was. Any injury is upsetting but something like this is just disgusting.

“I hope something will happen, he can’t get away with that! He’s got previous! Thank you all for the messages, love and support.”

Mings apologised several times on social media, adding an extra comment after that post: “No one feels worse than me.”

Now he is a father, football has been put into perspective but it seems as if he has really found his home at Villa Park. Captain Jack Grealish now hands the loanee the armband whenever he is substituted, showing just how much of an influence Mings is on that Villa side.

He will need to be rock solid once again tonight as Aston Villa take a 2-1 lead to West Brom as the chase a second successive play-off final. Mings will surely want to make his move a permanent one over the summer as he has become an instant hero amongst Villa fans but his off-the-field work with mental health and homelessness must also be praised.