This weekend is the biggest of the flat season in Ireland with six group 1s for fans to feast on.

However, next Tuesday is a big day in the diary of all horse racing fans the world over as the first runners from Gordon Elliott following a six month ban for bringing racing into disrepute, will step foot onto the track at Punchestown.

The triple Grand National winning trainer was photographed sitting on the dead 7yo Morgan in 2019, with the photo surfacing just a few weeks before the Cheltenham Festival in a “malicious” move from “someone out to get me” according to Elliott. The rumour mill went into overdrive promising another exposé that never materialised, but the damage was done, and the world crashed in at Cullentra stables.

Many employees supported their boss, remained loyal and were sorry to see stars of the yard leave, such as the unbeaten at the time Envoi Allen and future stars Sir Gerhard, Quilixios and Malone Road, part of the six strong and successful Cheveley Park Stud team. His biggest ally, Ryanair boss Michael O’Leary, for whom Elliott won two Grand Nationals with the diminutive legend Tiger Roll, stood by the former jockey in his most challenging hour. 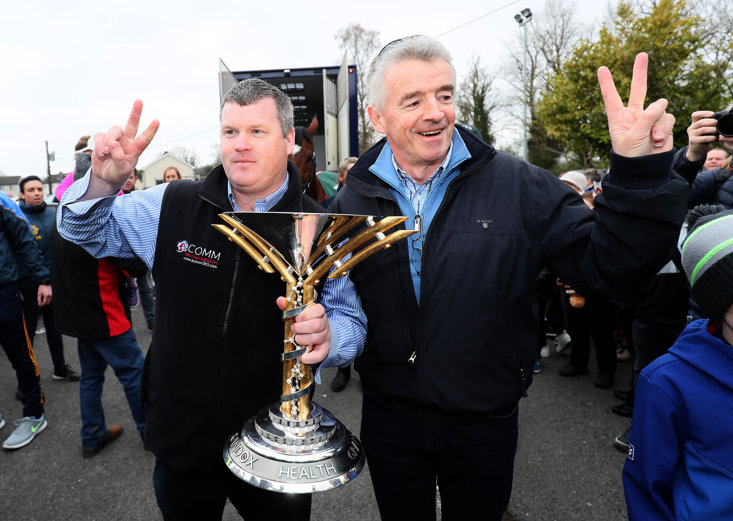 A huge interview this week in the trade paper, the Racing Post, marking his return was met with mixed reaction. I say mixed, it was more negative responses than positive for sure as he apologised for a ‘moment of madness’. Many people don’t need much of a reason to beat horse racing with a stick, and here they were given a free shot with the biggest of birches.

The 43-year-old truly did not realise the impact such an image would have as he never saw himself as someone with so much influence, yet he received messages of support from the likes of fellow trainers Willie Mullins and Henry De Bromhead while Sir Alex Ferguson got in touch to liken the episode to that of Eric Cantona’s flying kung fu kick in 1995, with the public baying for the blood of a high profile figure.

I am not here to defend Gordon Elliott on the back of a distasteful and disrespectful photograph that he admitted was taken, but I will try to put it into context.

Elliott suffered the same ban as Charles Byrnes whose runner, Viking Hoard, was found to have such a high amount of sedation in his body at Tramore in a race that involved suspicious betting patterns in which the horse was backed to lose. It was understood a third party had been the administrator of the injection, but Byrnes was found guilty of leaving his runner unattended at the racecourse.

Then there is the case of Stephen Mahon who had a four year ban for serious cruelty to horses in his care reduced by six months recently. His ban is just seven times that of Elliott despite serious welfare breaches to horses - some of which had to be euthanised. ​​​​​

While there was some outcry from within the sport, these other two cases never touched the sides in terms of the enormity of the Elliott photo and again, I am stating here that I am not defending Elliott’s actions, we are dealing with a man astride a dead horse compared to serious actual harm to horses who still have lots to give and were entrusted to these trainers.

There are other bubbling issues in Irish racing, such as the recent Panorama investigation into fit and healthy horses arriving at abattoirs and top trainer Jim Bolger alluding to major drug issues in stables across the Emerald Isle, an accusation that is yet to be addressed.

It is a major concern for those, like me, who love and work within the sport.

Elliott told the Racing Post "I know all this has set me back, but I have proved I can train horses at every level, and it's all I want to do. I made a mistake, I understand that, and I am sorry for what I did. A chance to move on is all I'm after now.”

He will get that chance from Tuesday. It will be against the wishes of many while a few will welcome his return as there is no doubt his ability to get the best from his horses and we want to see the best vs the best at every available opportunity.