Horse Racing
News
The trainer faces an IHRB probe due to a photgraph which emerged on Saturday
Matt Hulmes
14:40, 01 Mar 2021

The world of horse racing was shaken to its core on Saturday evening when an image appeared on social media apparently showing leading Irish trainer Gordon Elliott sat upon a deceased horse on his gallops.

Elliott is the trainer of dual Grand National hero Tiger Roll, owned by Ryanair founder Michael O’Leary, and has built up a successful team at his base in County Meath.

At the age of just 29, Elliott saddled Silver Birch to Grand National success in 2007 and has trained over 30 winners at the Cheltenham Festival. There are not many more trainers with a higher profile.

Speculation was rife on all platforms of the image’s authenticity, with Photoshop forensics analysing all angles and every pixel before Elliott himself took to Twitter to declare that he is co-operating with an IHRB (Irish racing’s governing body) investigation into the picture.

Later that evening, Elliott released a statement regarding the photograph. It read: "I would like to address the speculation and rumours that have been rife since an old photo of me began circulating on social media yesterday afternoon.

"Firstly, I apologise profoundly for any offence that this photo has caused and can categorically state that the welfare of each and every horse under my care is paramount and has been central to the success that we have enjoyed here at Cullentra. The photo in question was taken some time ago and occurred after a horse had died of an apparent heart attack on the gallops. I appreciate that an initial viewing of this photo suggests it is a callous and staged photo, but nothing could be further from the truth.

"At what was a sad time, which it is when any horse under my care passes away, my initial reaction was to get the body removed from where it was positioned. I was standing over the horse waiting to help with the removal of the body, in the course of which, to my memory I received a call and, without thinking, I sat down to take it. Hearing a shout from one of my team, I gestured to wait until I was finished. 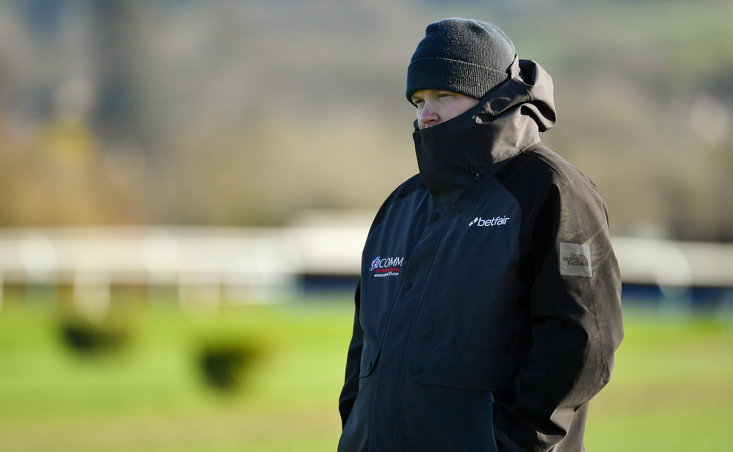 "Such background information may seem trivial at this time and will not allay the concerns of many people both within and outside the world of horse racing. However, I feel it is important to provide people with some context surrounding this photo. To the racing community, to anyone who has worked with and loves horses and to anyone offended by this image I cannot apologise enough.

"Horse welfare and the care and attention to detail involved is absolutely at the core of everything we do here and both myself and all of my team pride ourselves on those standards.

"Again, I apologise for any offence caused and ask people to consider this statement as opposed to the various falsehoods and misinformation being circulated on social media.

"At this time I would like to stress that I continue to extend my full cooperation with the ongoing IHRB investigation."

Subsequently, O’Leary has come out in support of his trainer despite being “deeply disappointed” by the photo that has emerged.

This tragic event is yet another blow to the image of horse racing, so often at the forefront of animal cruelty campaigns, especially at this time of year with the Cheltenham Festival just around the corner and the Grand National on the horizon. The timing of the photo’s release could not have been worse for the sport in that respect.

Despite the excellent care and welfare of animals across the sport, and even those in the care of Elliott at Cullentra House, events like this put the sport on the front pages for the wrong reasons. Racing has been losing column inches in mainstream media for years and when big and heart-warming stories are just days away with ‘Festival Fever’ in the Cotswolds, all the talk will be of this unsavoury incident.

It is hoped that the investigation will be swift, and punishment will no doubt follow. Whether that is sufficient for many followers in the game remains to be seen.

To receive the support of his greatest ally will be small comfort to Elliott, who immediately lost the sponsorship of major bookmaker Betfair early on Monday morning, and plenty will be spoken about him on the Cheltenham preview evening circuit which is underway.

Nowadays everybody voices their opinion on those social media platforms from where this story originated, but the only opinion that matters for the next few days is that of the IHRB as they conclude the investigation and have the unenviable task of arising at a decision on the matter.