Boxing
News
The Sportsman charts the history of the grandest belt in the domestic game
Joey Mills
13:00, 26 Nov 2022

On Saturday night, Fabio Wardley and Nathan Gorman will honour one of the great British boxing traditions. Since Jack Palmer beat Geoff Thorne by first round knockout in 1905 to win the inaugural belt, there have been 59 separate British heavyweight title reigns. Gorman and Wardley will battle to be the 60th champion at Wembley Arena this weekend.

The fight feels like a return to tradition for the regal Lord Lonsdale Challenge belt. An upturn in the world standing of British heavyweights has seen the iconic gold pushed to the side in recent years. Only two champions, Daniel Dubois and Sam Sexton, have lost the championship in the ring in the last ten years. Tyson Fury, Dillian Whyte, Anthony Joshua and Joe Joyce have all abandoned the once-prestigious belt to pursue world titles. While the British heavyweight belt used to be a destination for domestic fighters, it has now been relegated to a stepping stone.

In the past, the British belt was the pinnacle of heavyweight boxing in this country. This was partially due to the fact Britain went without a world heavyweight champion between 1899 and 1993. When Lennox Lewis vacated the gold in 1992 to pursue world honours, it kicked off an era of greater visibility for what were formerly known as the “horizontal” British heavyweights.

Subsequent champion Herbie Hide similarly bungeed off his Lonsdale status towards a world title, capturing two WBO championships. Frank Bruno avoided the traditional route altogether, eventually reigning as WBC king in 1995. A belt that once signified the best heavyweight in the country now signified “the best of the rest”. It was arguably all the better for it.

The reduced importance of the British belt was a counterintuitive sign of strength. No longer could the finest big men in the country duke it out for the gorgeously adorned strap, because they pursued a higher calling. A chance to write their names alongside Jack Johnson, Joe Louis and Muhammad Ali. Some, like Lewis, Bruno and Hyde, even managed it. 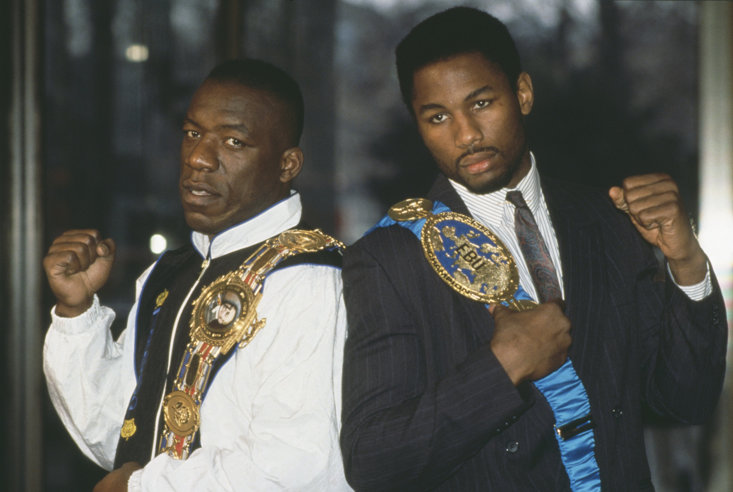 As Britain’s great big men of the 90s retired (Lewis, Bruno) or faded (Hyde, ex-WBO boss Henry Akinwande), the British belt became a vital promotional tool once again. A domestic ‘Four Kings’ formed around Danny Williams, Matt Skelton, Audley Harrison and Michael Sprott. Three of the four would attempt world title challenges. Each would fail, but with the safety net of the arena-filling power of a rejuvenated British championship to fall back on. Much of this mid-2000s peak for the great belt came with terrestrial television coverage, with the fights beamed out on Saturday nights on ITV.

As with much of sport, and life, this development was cyclical. The ITV deal wouldn’t last and former cab driver Martin Rogan would go on to run through that group of heavyweights like Steve Collins did to the Chris Eubank/Nigel Benn super middleweight axis a decade earlier. The belt left the arena circuit for a while, being defended in small halls like Crowtree Leisure Centre in Sunderland.

The title would return to the spotlight when unbeaten prospects Tyson Fury and Derek Chisora collided at Wembley Arena in 2011. ‘The Gypsy King’ won via decision, but would vacate the title soon after. This kicked off the modern era, where the belt was largely a trinket picked up on the road to bigger things. Fury would enjoy another brief reign, while Anthony Joshua, David Price, Dillian Whyte and Joe Joyce all vacated it to pursue world honours.

Wardley vs Gorman feels like a true throwback. As in the 1990s, Britain’s best heavyweights are off doing their own thing on the world scene. That’s no dig at Gorman and Wardley. They could reach world level one day. But this fight doesn’t have the feel of a stepping stone. Saturday’s combatants are evenly-matched and in search of their first major title. This is how it should be. The British title is an end in itself, rather than a means to jockey for position. Hopefully the winner will defend it proudly, rather than throw it to the side in an act of cold careerism. Such a fine and historic championship deserves far better than that.