Ronnie O’Sullivan reckons he is more grafter than genius – and that his dedication and commitment to the hard yards on the practice table is sometimes overlooked.

And the Rocket also insists that his competitive instincts would have seen him get to the top level in another sport if things had not worked out so well for him in snooker.

Six-time world champion O’Sullivan, 46, is regularly hailed as the greatest player ever to pick up a cue, and praised for his natural talent that can make a difficult sport look almost effortless. But the holder of many of the game’s records, including most Triple Crown and ranking-event wins and also 147 maximum breaks and centuries, says most of it is down to hard work.

World No3 O’Sullivan, also a regular pundit for Eurosport, said: “I do think the hard work and graft I have out in over 35 years does get overlooked sometimes. You just hear the comments about natural talent.

“But ask Anthony Hamilton about me or anyone that has practised in the same facility as me and they will tell you about my work ethic.

“Listen it’s lovely if people say ‘Ronnie is a genius’, that’s nice they speak about you in those terms. But when they say ‘It’s okay for him, he’s just got the talent’ that bothers me.

“It isn’t just me getting out of bed for 30 years and winning titles, there is so much practice for up to eight hours a day.

“And I don’t care who you are, Tiger Woods, Roger Federer, Lionel Messi at their peak -they have won what they have won by doing the hard yards in practice.

“If things hadn’t worked out in snooker for me and I hadn’t been quite good enough to make a living from it, I am sure I would have been a sportsman in some other way.

“The competitive animal in me and also the desire to put in the hours of training  and dedication would have found a home somewhere.

“Maybe if I had got into a car as a kid, then I could have been Formula One world champion! Be a Schumacher or whoever else, as I love that. And I like to think that whatever other sport I would have  chosen I would have done very well at it. 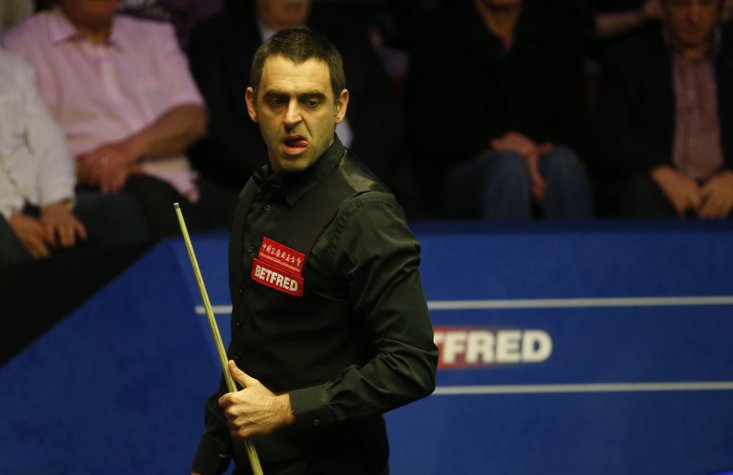 “I look at some snooker players who have done well without that much talent but they have really applied themselves. And I’d like to think I could have done that at something like golf.

“I wouldn’t have had anywhere the talent of the best players, but maybe enough to make the top ten through hard work.

“I watch a lot of sport. Many of those earning a decent living are not that good in terms of raw talent. I think most people could be a professional sportsman with some real time and effort. But part of me thinks if you can play one ball sport, you can probably play most of them with training.”

O’Sullivan has also never been afraid to dabble in the political arena, having in the past supported and spent time with Ed Miliband when he was leader of the Labour Party ahead of the 2015 general election, and backed Jeremy Corbyn in the 2017 national poll.

And with the Prime Minister Boris Johnson under pressure on various fronts, he has given his less-than-flattering opinion on the current incumbent of No10.

O’Sullivan added: “The world is a strange place at the moment. America had Donald Trump for a few years and that put them in a spin. We had Corbyn come along and tried to rebalance things here, that was good in many ways because it got people talking about some of the issues.

“And we have ended up with Boris who may be a nice guy – but he is just funny and a bit of a joke. You can’t really take him seriously. As a backbencher and someone you roll out every now and again he was funny. But seeing him in that situation as Prime Minister, you just laugh.

“And politics isn’t a laughing game. Maybe we need another Tony Blair. I watched the documentary about him and Gordon Brown recently. They came in at a different angle and knew the mood of the people. They were better times for the country and so we need a serious person at the top who also has some charisma. Those people are not easy to find.”

Back on the table O’Sullivan will be in action in Coventry at the Ricoh Arena in the World Grand Prix following on from the Scottish Open in Llandudno. The Grand Prix is reserved for the 32 best-performing players of the season to date, and that means Chinese sensation and new UK champion Zhao Xintong will be the No1 seed.