La Liga’s title race has taken yet another twist as Granada came from behind at the Nou Camp to stun Barcelona 2-1. When 1-0 up thanks to a Lionel Messi goal, Barcelona were heading to the top of the league before in the second half they unraveled and Granada rallied.

Darwin Machis found the with an equaliser in the second half before the man of the moment scored the winner. 39-year-old Jorge Molina headed home to become the oldest man to score at the Nou Camp since Alfredo di Stefano and crush Barcelona’s title hopes.

In a second half that fell apart for the hosts, manager Ronald Koeman was sent off in a match that may have cost Barca the title. With just five games to go, La Liga has a title race that is the envy of the whole of Europe. Only Ligue 1 in Europe’s top five leagues has a similarly competitive title race heading into the final stages of the season.

Atletico Madrid, despite winning just two of their last five games, are still clinging to top spot on 73 points. Next Saturday they face Barcelona away in one of the games of the season hoping to do what they did in 2014 and snatch the title away from their long-term rivals.

In second place on 71 points are Real Madrid, who look in hot form to win the league although Zinedine Zidane’s side also have the second leg of their Champions League semi-final to deal with next week. Whether their attention may be on Europe rather than the domestic league could well be their downfall, although Zidane has the experience of juggling both of these competitions.

Los Blancos are level on points with Barcelona and it is Messi’s side who boast a better goal difference, however in Spain, the head-to-head record takes precedence over goal difference. Real Madrid have beaten Barcelona home and away this year, so if it comes down to it, that will decide the title. 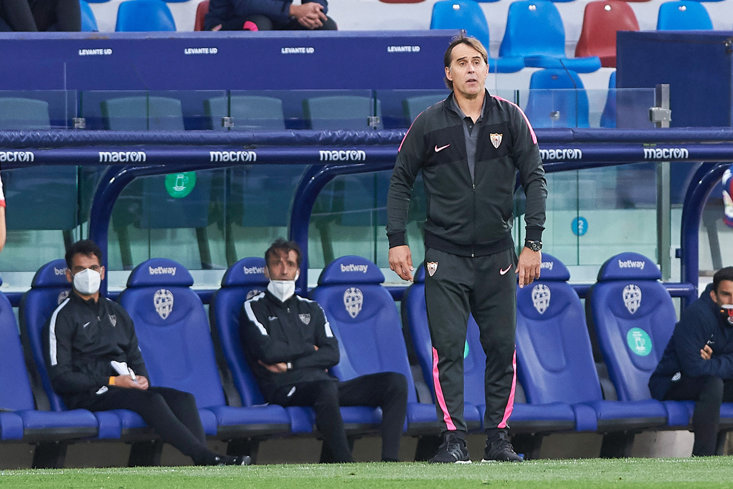 One side who have caught up ground on the stuttering trio massively in recent weeks is fourth placed Sevilla. Under former Spain and Real Madrid boss Julen Lopetegui, they have won five league games in a row, including an important home win over Atletico. Now, they lie just one point behind both Barcelona and Real Madrid, and they play the latter on the same weekend Barcelona play Atletico. What a spectacle that should be.

It would be a remarkable turn of events for Lopetegui to steal the title from under the noses of his former employer and he is doing a grand job rebuilding his reputation after the Spain farce, and Real Madrid fiasco.

This title race is almost certainly going to come down to the final day as all four giants battle it out. Next weekend should be a cracker, as Barcelona have missed their chance to go top. Granada just threw a cat amongst the pigeons.