The Grand National always delivers a story and it was some fairy tale this year as Noble Yeats became the first 7yo since 1940 to win the race and give amateur jockey Sam Waley-Cohen a SEVENTH win over the famous fences on his FINAL EVER RIDE.

The Waley-Cohen family have been trying for years to win this famous contest, with a third place the best they had previously managed, despite winning many other races over the obstacles at Aintree.

Racing TV
@RacingTV
♥️ The perfect end to a remarkable career
On his final ride, @swaleycohen wins the 2022 #RandoxGrandNational for Emmet Mullins at @AintreeRaces aboard 50/1 shot Noble Yeats
251
899

Sam announced on Thursday that this would be his final ride and he had an able partner in the 50/1 shot who was passed in the air over the last fence by well backed favourite Any Second Now but had got back in front passing the elbow.

The winning rider said “It’s a dream. It feels like a fantasy, its beyond words.

“He ran for me. He couldn’t go the early pace, so I was looking for pockets and I was going more forward than I wanted too. I thought I’d gone too early but as soon as he picked up I thought ‘I’ve got this’.

“I have to thank my dad who has supported me unwaveringly, we have only ever done this for fun. There were no expectations, no instructions, just go out and enjoy it.

“Liverpool has come out and shown its love and you feel like you travel on good will in this place. 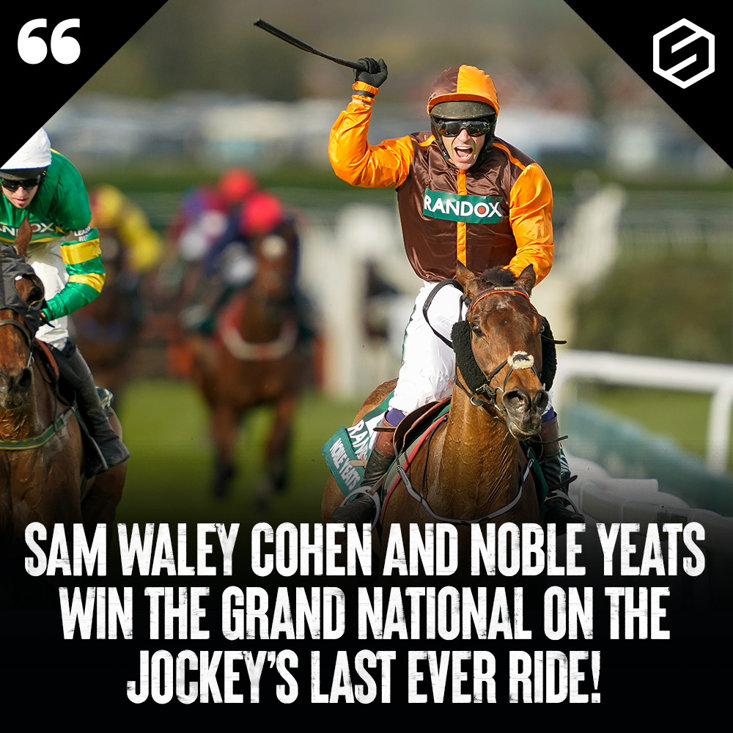 The front pair had pulled well clear of Delta Work in third with Santini plugging on for fourth to be the first British trained runner home while Fiddlerontheroof took fifth.

For the first time in three years, The Grand National was played in front of a crowd as 70,000 spectators graced Aintree while bookmakers’ shops were also open for the first time since Tiger Roll’s second success in 2019.