For two former Grand Slam winners, who both climbed as high as No3 in the world, the Andalucia Open in Marbella will carry far more significance than would usually be the case for a relatively low-key Challenger tournament on the Costa Del Sol.

Austria’s Dominic Thiem, at 28, should be in his absolute prime and building on a superb three years from 2018 to 2020 that saw him win the US Open, and reach finals at the French Open, twice, and also the Australian Open in Melbourne.

But in 2021 things started to go seriously wrong for Thiem, a player with a huge power game, devastating ground strokes with both the forehand and a single-handed backhand, and a serve of up to 145mph at times.

Poor form and a knee injury saw him take a short break to “recharge” – but there was worse to come for Thiem. He came back in Madrid, but after early exits at both Lyon and the French and pulling out of the Olympics he suffered the wrist injury in Mallorca that required surgery and has kept him out until now – an especially troubling problem for someone that relies on hitting the ball with such ferocity.

That was it for Thiem’s year and season, missing Wimbledon and the US Open, and after a couple of aborted attempts to return, he withdrew from this year’s Australian as well as Indian Wells and Miami. But the target became the European clay-court season, and it starts for the Austrian in Spain after being handed an invitational wildcard by the organisers.

In an emotional message that revealed some of the agonies of injury and struggles with his form over the past 18 months, Thiem - down to world No50 - said on his Instagram account: “I will be playing next week a tournament in Marbella, Spain. I want to start getting contact with the competition after all these months and I believe this is the right way to start.

“It's been a very, very tough period for me and to go back to competition is what I need. To step on a tennis court and compete is what I have been waiting for so long and I had a lot of setbacks. I know this will be a slow process of getting back to the top level, but I am ready to work hard and start humble. I want to thank the tournament director for his invitation.”

The locals plus any ex-pats and holiday-makers stand to get good value from tickets starting as low as £18, because in addition to Thiem, three-time Grand Slam champion Stan Wawrinka has also been granted a wildcard and takes his place in the draw. 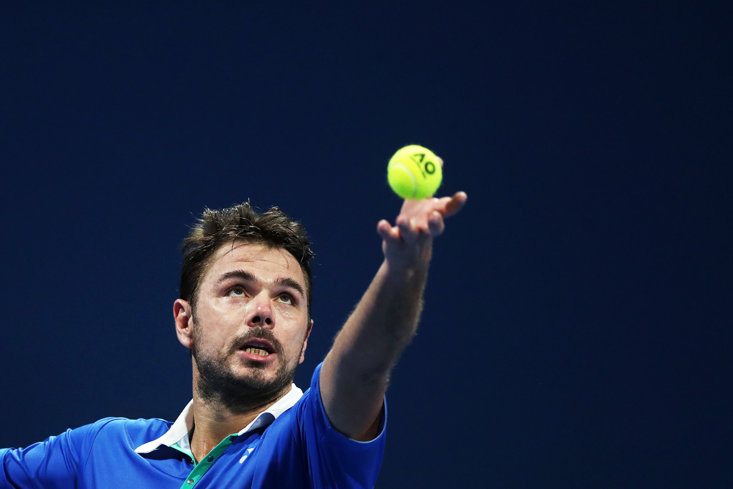 Wawrinka, now 36, may have thought his time on court was over after more than a year out with an injury to his left foot that also required surgery. Another player from an Alpine country, his mountain back to competitive action has if anything been even harder to climb.

Another player with a majestic single-handed backhand, Wawrinka managed to escape the considerable shadow cast by Swiss compatriot Roger Federer long enough to create plenty of his own history

He has won 16 singles titles including major successes at the US Open, French Open and Australian Open – not to mention Olympic gold in the doubles with Federer in the 2008 Beijing Games, and playing a key role in Switzerland’s 2014 Davis Cup success. And though Wawrinka has slipped down to No232 in the rankings due to his inactivity he clearly still feels there is something left to achieve that will be worth all the hard recovery work.

Federer is now 40, and has not been seen on a tennis court since Wimbledon last year – with no guarantees that will ever happen again after a truly magnificent and illustrious career. But Wawrinka, speaking recently to French sports newspaper L’Equipe, revealed what has driven him back to the court.

He said: “The most important thing is not knowing what level you can reach, but what flame you have inside you to do whatever it takes to push the limits again.”

Wawrinka has not been sitting around on his hands during his time away from the game, and was a co-producer in the French film comedy ‘Maison de Retraite’ starring Kev Adams and Gerard Depardieu, currently doing good numbers at the box office in francophone countries.

But he, along with Thiem, will be back in front of the cameras in Marbella.

x
Suggested Searches:
The Sportsman
Manchester United
Liverpool
Manchester City
Premier League
More
tennis
British Star Cameron Norrie Wins First ATP Title On Clay Ahead...
Cameron Norrie saw his preparations for the French Open come together perfectly by winning his [ ... ]
tennis
Wimbledon Faces Major Dilemma As WTA And ATP Withdraw Rankings...
Unless there are further seismic developments in the weeks to come, this year’s Wimbledon Championships [ ... ]
tennis
End Of An Era For British Women's Tennis As Robson Joins Konta...
As they say, nothing lasts forever, and in sport careers come and go in the blink of an eye. On Monday, [ ... ]
tennis
Everything You Need To Know About The 2022 French Open As Djokovic...
The French Open is here and the qualifiers have begun for the second Grand Slam tournament of the year. [ ... ]
tennis
Rafael Nadal's Ten Most Career-Defining Wins Ahead Of Seismic...
As Rafael Nadal continues his build-up for the French Open, where he will attempt to extend two huge [ ... ]
tennis
Can Alcaraz Follow In Compatriot Nadal's Footsteps And Dominate...
The French Open is just around the corner and after falling at the semi-final stage last year, everyone [ ... ]
tennis
Andy Murray v Novak Djokovic: The Great Battle Resumes After...
It has been five years in the making. Andy Murray and Novak Djokovic go to battle once again on Thursday [ ... ]
tennis
British Stars Enjoy Positive Start To Madrid Open
It has been a fine start for British talent in the Madrid Open this week with Emma Raducanu, Dan Evans, [ ... ]
tennis
Can Croatia’s Junior Sensation Petra Marcinko Follow World No1...
A quick glance at the roll call of honour of junior girls Grand Slam winners is enough to show it is [ ... ]
tennis
Emma Raducanu Needs The Freedom To Develop At Her Own Pace
Change is a thing of nature, it happens all the time and sport is no different. For teams, players come [ ... ]
tennis
Outspoken Novak Djokovic Is In Danger Of Following In Margaret...
‘Sometimes the wise man says nothing at all’ Novak Djokovic could learn to take this advice [ ... ]
tennis
British Tennis Is In Safe Hands As Cameron Norrie Breaks Top...
Emma Raducanu’s US Open triumph in September was a monumental piece of British sporting history [ ... ]
tennis
No Escape From Alcaraz: The Latest Teenage Sensation Taking...
Last year, the world of tennis fell in love with a teenage sensation as Britain’s very own Emma [ ... ]
tennis
Naomi Osaka Is Winning Matches, But More Importantly Smiling...
Naomi Osaka has battled her way through to the semi-finals of the Miami Open after defeating America’s [ ... ]
tennis
Linda Fruhvirtova: The 16-Year-Old Sensation Following In Sharapova's...
What were you doing at 16? Probably not making an impact on the sport of tennis in the same way that [ ... ]
tennis
Miami Open: Jack Draper A “Better Player” Ahead Of Rematch With...
On Friday, out in the Florida sun, the heat will rise on court at the Miami Open as we witness a Battle [ ... ]
tennis
Injury Setback Is Just Another Hurdle For Nadal To Clear As...
2022 has so far exceeded expectations for Rafael Nadal and some of the tennis he has showcased has been [ ... ]
tennis
Ashleigh Barty Retires: ''There Is No Right Or Wrong Way To...
World No1 and reigning Wimbledon champion Ash Barty has left the tennis world stunned by announcing [ ... ]
tennis
Iga Swiatek Up To No2 In World Rankings After Scorching Start...
Whatever Iga Swiatek’s still relatively new coach Tomasz Wiktorowski said to her after scraping [ ... ]
tennis
On This Day: Roger Federer Joins Jimmy Connors As A Centurion
Roger Federer is a tennis icon who has spearheaded an era of greatness and intense competition. His [ ... ]
tennis
World No1 Daniil Medvedev Ushering In A New Era On The Court
The tide is changing in tennis. A new era is being ushered in as an 18-year monopoly has finally come [ ... ]
tennis
One Year Since Novak Djokovic Won The Australian Open, Has He...
It’s been quite the year for Novak Djokovic, who is back in action today. On this day in 2021, [ ... ]
tennis
Why John McEnroe Epitomises The Best In Tennis And How It Can...
It’s nearing the end of the long, hot summer. The year is 1984. You’ve got your Member’s [ ... ]
tennis
Djokovic's Vow To Miss Tournaments Poses Risk For His Grand...
We may be in February and the Australian Open is already done and dusted but the Novak Djokovic Covid [ ... ]
tennis
Del Potro's Tennis Legacy Is Secure Ahead Of Argentine's Imminent...
Tennis is preparing to bid farewell to one of the star players of this era. He may not be on the level [ ... ]
tennis
Greatest Of All Time? Nadal's 21st Grand Slam Title Makes Him...
On Sunday we witnessed history, and it epitomised the great period of rich history of tennis that has [ ... ]
tennis
Rafael Nadal Pulls Off The Ultimate Comeback To Win The 2022...
Rafael Nadal produced an astonishing comeback to secure the most improbable victory of his career and [ ... ]
tennis
Ashleigh Barty Becomes First Home Singles Winner Of Australian...
For 87 minutes, there was barely a flicker of emotion from Ashleigh Barty. No histrionics, no drama [ ... ]
tennis
Historic Weekend In Melbourne As 2022 Australian Open Comes...
This year’s Australian Open has served up some excellent tennis and we are at the last stretch [ ... ]
tennis
Five Years Since Her Last Grand Slam Win, Serena Williams Remains...
Remarkably, it has now been a full five years since the greatest female tennis player of all [ ... ]