Football
News
Comparing the two is harmful if anything; they both have a role to play in the national team picture
Harry De Cosemo
13:01, 23 Feb 2020

For years, England have been crying out for creativity in midfield. It has been the one thing missing in the resurgence of the national team, and the lack of it has proven to be the stumbling block in the Three Lions’ hunt for glory. At Euro 2012, Andrea Pirlo played them off the pitch with an execution of grace and class as Italy won on penalties in the quarter finals. Six years later, this time in the World Cup semi final, Luka Modric kept them at arm’s length as he inspired Croatia to victory. Last year, in the Nations League, Frenkie De Jong was the difference as Holland punished Gareth Southgate’s men.

Nevertheless, there are signs things are changing. It is quintessential for the English press and fans to get overexcited at the progress being undertaken right now, but despite the potential for a team of superstars to come together in the future, calm and patience is required. Between 1996 and 2010, talent and quality weren’t the problem, and yet the ‘Golden Generation’ are only remembered for their near misses. It wouldn’t be going too far to suggest that the hype, pressure and scrutiny they faced were a huge contributing factor in that.

A blend of the 2017 under-17 World Cup winners, such as Callum Hudson-Odoi, Phil Foden and Jadon Sancho, and more established players like Harry Kane and Raheem Sterling, could be a recipe for success for Southgate, starting at Euro 2020 this summer. The favourites tag shows just how far the team has come, nurtured by their modern, forward-thinking manager, and the strength in depth of the squad he’ll have to pick from. Hudson-Odoi and Foden aren’t likely to be involved yet, but there are two players hoping to become the solution to the creativity problem; James Maddison of Leicester City and Aston Villa’s Jack Grealish.

While England are still looking for someone to dominate the game from deep, both Maddison and Grealish have shown how they can be the link between midfield and attack. They are the linchpins for their respective sides, and though they are currently operating at different ends of the Premier League table, with Maddison pushing for the Champions League and Grealish looking to inspire Villa to survival, there has been very little to choose between the two of them. Still, though, there is an insistence that they must be compared.

It does nobody much good to do that, except perhaps Manchester United, who have been linked with signing either in the summer. The notion has even been mocked by Maddison himself who, when on holiday with his perceived rival, posted a picture of the pair on Instagram with a caption exposing the futility of such arguments. The fact is, players such as these, who are destined to go onto better things in future, have been difficult to find for England. Comparing them is harmful if anything; they both have a role to play in the national team picture, and that is the only arena where they are ever likely to compete for a starting place. 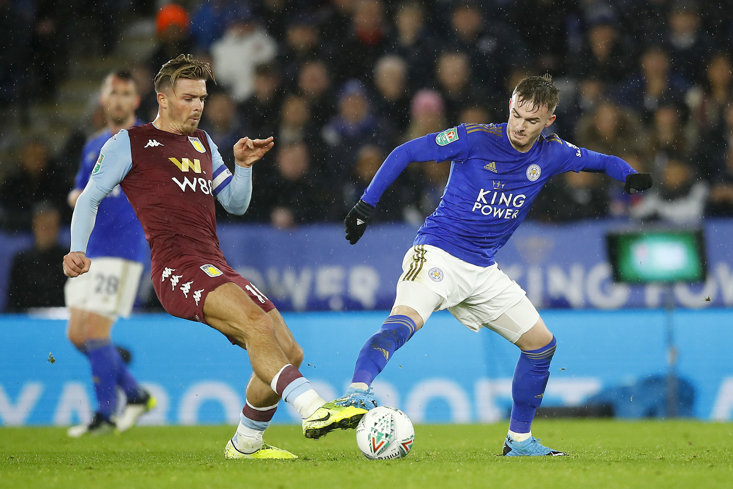 Maddison or Grealish? Grealish or Maddison? Let's enjoy both

Grealish took a lot of stick for his decision to swap Irish loyalties for English, but the long game appears to have paid off in the end. It seems inconceivable that he won’t be in Southgate’s squad for the fixtures against Italy and Denmark next month, staking a claim for his place in the summer plans. Only injury and some suspect behaviour have stunted Maddison’s international career so far, but again, he simply must be selected if fit.

If Leicester do make it into the Champions League, it is unlikely that they’ll sell Maddison despite growing interest. If they do, it’ll be on their terms, as was the case with Harry Maguire last summer. The same can’t be said for Grealish, a man with a Villa heart, regardless of what league they are in next season; it feels like he has been outgrowing his surroundings ever since a move to Tottenham Hotspur fell through in 2018.

But they are both likely to be thinking about their country by then, ready to help achieve history. Injuries to Kane, Sterling and Marcus Rashford will mean anxious waits for Southgate and supporters ahead of the tournament, but whatever happens, the future is bright because of the players coming through. Creativity and flair have been hard to come by for some time, meaning Grealish and Maddison should be cherished and enjoyed rather than compared and contrasted.