Motorsport
News
Hamilton produced a remarkable late come-back after the most dramatic of starts to the race
Simon Lillicrap
17:30, 18 Jul 2021

It was a tale of two Copse Corner overtakes for the Brit, after his opening-lap collision with Max Verstappen had seen the championship leader spin out, Hamilton punished with a 10-second pit-lane penalty and the red flag brought out to bring the race to a halt.

From the restart it looked as if it would be the Italians who would be left celebrating on English soil once more following quick on the heels of the Euro 2020 final, as the Ferrari of Leclerc took advantage of the collision. But they hadn’t counted on one of the most remarkable comebacks the seven-time champion has ever produced.

With nine laps to go, Hamilton was waved past teammate Valtteri Bottas into second, and from there he put his foot to the floor in order to catch the leader. Leclerc’s nine-second lead evaporated as the Brit posted fastest lap after fastest lap before showing immense bravery to launch another attack on turn nine.

He dived down the inside, just as he had on lap one, but this time he got past Leclerc, who ran wide and lost the line, ending up finishing second. The 140,000 fans at Silverstone roared as he passed the Ferrari to register his 99th career win in the most dramatic of circumstances. Despite Hamilton’s brilliance, the controversy of the first lap cannot be ignored. 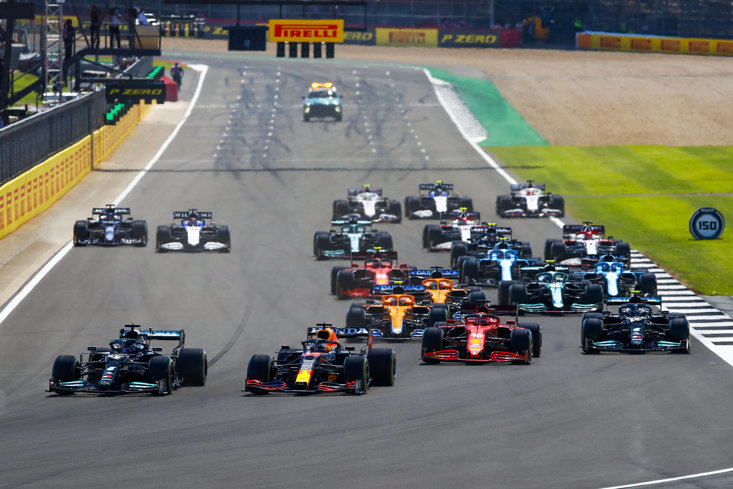 After a brilliant start from the home favourite, Verstappen was forced onto the defensive as Hamilton did everything possible to get past his title rival, who led by 33 points ahead of the race. Heading into Copse Corner, Hamilton forced his Mercedes up the inside of the Red Bull, and his front left wheel collided with Verstappen’s back right, spinning him the Dutchman into the barrier at 160mph.

Luckily for all involved, the 23-year-old walked away with only his title hopes and his Red Bull suffering any real damage. The red flag, just the fourth in Silverstone history, left Team Principal Christian Horner absolutely furious as he spoke to the FIA about potential sanctions.

“Copse is one of the fastest corners in the world, you don’t stick a wheel up the inside, that’s just dirty driving,”  he said over the radio.

"Look, that corner. He was never anywhere near alongside. It was an enormous accident. That was 100% Max's corner. Full blame lies on Hamilton. Thank God he's walked away unscathed. I hope you're going to deal with it appropriately.”

The seven-time world champion saw things a little differently, but didn’t seem happy in the pits as the race was paused.

"I was ahead going in there, man," said Hamilton. "Fully alongside. It's my line. He turned in on me. I'd given the guy space."It seems he was given the benefit of the doubt by the stewards as, when the race restarted with Leclerc in first, the Brit was only given the 10-second penalty when many onlookers believed he deserved more.

When he eventually served that penalty on the 28th lap, Leclerc had driven the perfect race to lead the way despite engine troubles. Hamilton emerged in fifth, 34 seconds behind the race leader and with work to do.

The Monegasque driver came out from his stop leading from Bottas as he targeted his third Grand Prix win and, on a blisteringly hot day, the heat was felt in the pits. Carlos Sainz and Lando Norris were left sitting in the pits as mechanics struggled with the equipment as the Brit fell out of the podium places. Despite that stop, it was still a good weekend for McLaren as Norris came in fourth with teammate Ricciardo in fifth.

However, the late drama came from the seven-time champion, who was taking a second a lap out of Leclerc, until eventually he forced him into a mistake. Roared on by a vocal home crowd, Hamilton showed the sort of fight that makes him one of the greatest of all time and these 25 points put him just eight behind Verstappen in the standings.

In what is turning out to be an epic F1 season, this race will take some beating.